I saw Wreck-It Ralph last week. It has its strengths; the subplot involving the old-fashioned Fix-It Felix Jr. and the Gears of War-esque Sergeant Calhoun benefits from strong writing -- Calhoun's nigh-nonsensical nuggets of tough-guy wisdom are brilliant, reminiscent of The Tick in places -- and good performances from Jane Lynch and Jack McBrayer. It's so well done that it threatens on more than one occasion to overwhelm the main storyline, a bog-standard Disney bit of fluff about acceptance and being true to oneself.

The biggest problem with the film is its chronic lack of ambition in terms of visuals and design. The civilians -- non-player characters? -- of Ralph's world have the limited animation and movement of 8-bit sprites, as is appropriate, except they're not sprites. They're smooth, generic cgi, just like every other character in the film and every other character in every other post-Toy Story animated feature. It's a shame because the animators show -- with little touches like the way those NPCs move, or the pixellated blobs of cake icing splattered across the walls after one of Ralph's rampages -- that they've got some sense of how to make the visuals memorable, but they never quite get there. There's even a joke at one point -- in which Felix compliments Calhoun on her high-resolution curves -- that falls flat because Felix himself is rendered in high-resolution cgi. It's so disappointing.

I suppose it's easier, quicker and cheaper to produce animation in such a way, but when there's stuff like Paperman out there turning heads and winning awards based in no small part on its unique look, Wreck-It Ralph looks even more bland in comparison. As such, sticking the aforementioned short at the beginning of the film was probably not the cleverest thing Disney could have done.

Scrawled unintelligibly by thekelvingreen at 9:32 pm No comments:

Over at his blog, Martin writes about how monster books are his least favourite role-playing products. He then goes on to describe the kind of monsters that inhabit the campaign setting he's been using for fantasy games for a number of years, and presents a good argument for why monster books are of little use to him. 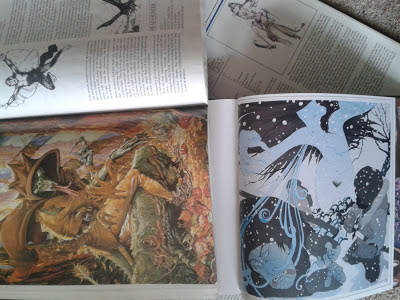 Unlike pretty much every other gaming blogger, I've never attempted to put together a fantasy setting, aside from when I ran a short Fighting Fantasy campaign, but in that case I was making it up as I went along so I don't think it counts. When I was younger, most of my gaming time was spent on Shadowrun and Call of Cthulhu, and in recent years I've only played in existing published settings, so it's never come up.

Even so, I love monster books. I have a stack of them here with me; most are for games I don't play while others -- like the beautiful Beasts and its sequel -- have nothing to do with gaming at all. As such, I don't get any practical use out of them, just as Martin doesn't, yet I love them nonetheless. There's something wonderful about a big thick book of exotic and impossible creatures; I have often spent an hour or two leafing through these volumes, reading the descriptions and -- above all -- admiring the illustrations. They are beautiful, despite their utility, or lack of; I doubt I'll ever make use of it in a game again but you wouldn't be able to prise Out of the Pit from my grasp as it's full of monsters drawn and painted by the likes of John Blanche and Russ Nicholson.

(That's Out of the Pit in the image above, with an Iain Mcaig shapechanger; also pictured is Tony DiTerlizzi's Medusa from the Monstrous Manual for AD&D2, and Frank Stockton's Yuki-Onna from Beasts! Book 2.)

I remember some rumblings a while ago about putting together some sort of community monster book, drawing upon the talents of the writers and artists who've sprung up to blog about games in the past few years. It hasn't happened yet, but if it will include things like The Guardian of the Palace of the Perfect Moon, it's nothing less than a great idea.
Scrawled unintelligibly by thekelvingreen at 12:28 pm 5 comments: My presentation is tomorrow and I am more than a little nervous. I know that there's no sense to being frightened, because I have to do it, frightened or not, and it's only a two minute piece, but this fear does not back down in the face of cold logic. It's weird -- and if I weren't in said state I'd find it fascinating -- because in general I'm not frightened by things, but the idea of public performance fills me with a cold, dark terror.

I've come up with a bit of blather about an aspect of technology -- I chose The Gimp as it's something about which I know at least a little -- and after some practice I've got it to fit into two minutes with a little wiggle room if I need it. It starts with a joke -- oh dear -- and ends with some blatant tubthumping for the open source movement, and with any luck I will never be asked to speak in public again.

It's only two minutes; what a sissy I am.
Scrawled unintelligibly by thekelvingreen at 9:18 pm 4 comments:

Email ThisBlogThis!Share to TwitterShare to FacebookShare to Pinterest
Labels: bricking it, my so-called life

Scrawled unintelligibly by thekelvingreen at 12:00 am 2 comments: You've seen the movie. It probably had Paul Rudd and Drew Barrymore in it, or if you were really unlucky, Gerard Butler and Jennifer Aniston. You've got the two friends who are more than just friends but haven't done anything about it, then something bad happens to one of them in the third act, so the other tries to comfort them, as friends do, they get closer and BOOM! There's a kiss, the music swells, the gay best friend cheers, and the credits roll as some inspirational pop classic plays. Well, that was more or less my Tuesday in a week that was -- for lack of a better word -- nuts.

To be clear, there was no you-know-what, not even a kiss, but the unspoken was spoken, let's put it that way. It was good, it felt right, but afterwards I was mortified and felt that I'd betrayed my friend's trust. I saw that friend every day that week, and we went out again on the Thursday -- to the same place, no less -- and I have not been so confused in a long time. I feel like a teenager, and as everyone knows, teenagers are idiots.

Then on Friday I couldn't get out of bed. I know what you're thinking, you filthy deviants, but I was alone; save your high-fives. I've had cases of depression -- or what seems very much like it -- before, but I've just sort of got on with things; this time I was unable to move and made myself two hours late for work. Again, mortified. I don't think it was related to the romantic entanglements of the days before, rather it was something that had been coming for a while. It had passed by the afternoon, but the depth of the funk is still quite a shock, even in hindsight.

So that's where I am right now. I've been keeping myself busy and diving into some outstanding work, as that seems the best way to take my mind off things; having everything go a bit bonkers seems to do wonders for one's productivity.
Scrawled unintelligibly by thekelvingreen at 8:08 pm 1 comment:

Back during the original console wars, I was a Sega boy. This meant that I got to play Streets of Rage and Sonic the Hedgehog but it did also mean that I missed out on the classic role-playing games of the era. We got the Phantasy Star series and Shining Force but we didn't get Dragon Quest, or Breath of Fire, or the big one, the Final Fantasy series. It didn't help that even Nintendo owners only saw half of these games, if that, released in Europe.

With the release of the PlayStation and Final Fantasy VII Nintendo's dominance of the genre faded away, so it's somewhat ironic that the best rpg of recent years -- since Final Fantasy XII on the PS2, I'd say -- appeared on the Wii, which, as everyone knows isn't a proper console for proper gaming, no siree.

Monolith Soft and Nintendo delivered Xenoblade, a game that looked much better than Wii games are supposed to look and played much better than any rpg in years, despite some wonky menu navigation. It combined the best aspects of both online and offline rpgs and if it had come out on the other consoles too, it would be regarded as one of the best games -- rpg or not -- of the current console generation.

Yes, I do mean to suggest that it's better than Skyrim, and it looks like there's a follow-up on the way:

I wasn't going to get a WiiU, but Nintendo may have just changed my mind.
Scrawled unintelligibly by thekelvingreen at 3:04 pm No comments:

It's Not Easy Being Green 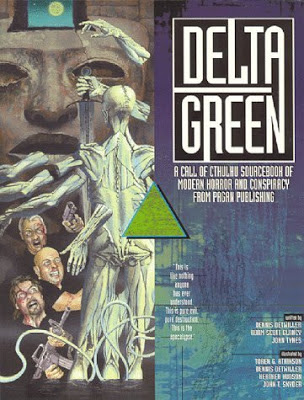 I bought Delta Green as soon as it came out, based on the combination of a positive review in the much-missed Arcane, my then-obsession with The X-Files -- I was young and foolish -- and my then-and-never-diminished love of Call of Cthulhu. I read it. I ran a few sessions. I didn't like it much.

Part of the problem was that there are too many conspiracies in the setting; everyone's involved in some multi-layered cabal, to an almost comedic extent; I can imagine that there's some potential in a light-hearted Delta Green game in the style of Over the Edge or Paranoia. Another issue was that some aspects of the setting were just naff, like The Fate, all trench coats and shades, like a poor man's World of Darkness.

The biggest problem with it is one that didn't become apparent until I encountered the setting as a player, as I did this past Friday. There is a lot going on in the Delta Green universe, and there are a lot of non-player characters involved in the various plots; the thing is, the NPCs remain elusive and untouchable, insulated from player contact by layers of narrative immunity as they go about having fun adventures while the players stand and watch. There's something rather familiar about all of that.

Yes, it seems that Delta Green is Call of Cthulhu's equivalent to the Forgotten Realms. No wonder I don't like it.
Scrawled unintelligibly by thekelvingreen at 11:27 pm 3 comments:

Oops, I Did It Again

Or in the words of John McClane, how can the same sh*t happen to the same guy twice?

In an unwelcome echo of previous events, I seem to have lost another friend, again through my own inept blundering. It is a wonder at this point that I have any friends left at all; I may have to ban myself from ever interacting with human beings, before I alienate anyone else.

I've got a couple of posts on the way this week, neither of which will be about my social blunders, you'll be pleased to know. I may have some new art to show off too.
Scrawled unintelligibly by thekelvingreen at 8:37 pm 2 comments: