"It doesn't matter, the project's been cancelled," they said, which is probably for the best, as I am not a natural comedian. Or even an unnatural one.

Anyway, here are some jokes about bards. Except the third one, which is about bards, but doesn't qualify as a joke, even if you squint. 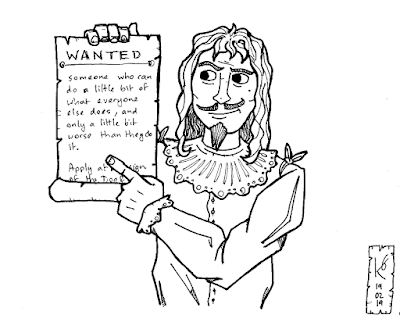 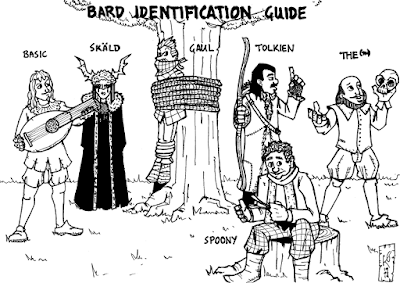 Scrawled unintelligibly by thekelvingreen at 10:00 am 2 comments:

Email ThisBlogThis!Share to TwitterShare to FacebookShare to Pinterest
Labels: bards, stuff that I drew

Testing in the Shadows

I am writing a new adventure for the Lamentations of the Flame Princess role-playing game; well, in truth I seem to be in a constant state of writing three or four adventures for LotFP, but I don't tend to mention it unless one is nearing publication. I'm not quite there with Terror in the Shadows, but it exists in complete enough form to be tested, which is lucky, because I started running it for my group on Saturday.

It's set in Paris in 1625, and is an investigation-based adventure; our first session consisted of lots of wandering around the slums, talking to people and looking for clues, and the closest the party got to a fight was when they apprehended a randomly-encountered pickpocket.

My goals with the test are to see how robust the mystery is in general, and also how well an investigative adventure fits into a D&D-like ruleset. So far the players haven't made use of any character mechanics -- no one's cast a spell yet, for example -- but the investigation seems to be progressing well, with no bottlenecks or dead ends threatening to scupper play.

The test has been useful in showing me where there may be gaps in the adventure -- no major holes so far! -- and in giving me ideas for further details to make it more interesting. The most enjoyable bit for me was seeing the players putting together bits of information and turning them into a series of -- sometimes contradictory -- theories about what's going on; since I've written the mystery, the solution is obvious to me and my fear was that it would be clear and straightforward -- and thus boring -- to the players too.

I suppose what I'm saying is that playtesting is good; that is something that's rather obvious and no one needs to be told, but there it is.

We should be meeting up again this weekend to continue the investigation. I'll let you know how it goes.
Scrawled unintelligibly by thekelvingreen at 10:00 am No comments:

Email ThisBlogThis!Share to TwitterShare to FacebookShare to Pinterest
Labels: games, Lamentations of the Flame Princess, Terror in the Shadows

The Dead City wasn't always known by that name. Once it was a thriving metropolis full of scholars that mapped the world and the stars, and were as arrogant as they were wise.

The wizard-kings of the Dead City foresaw the End and found a way out. It will surprise no one at all that this plan went wrong, and ZAP! that's how you end up with a city full of intelligent skeleton people. These skeleton people are known as Bones.

The Dead City is somewhere far away on the left side of the world map and most Bones have either been away for so long that they have forgotten where it is, or have no desire to return. 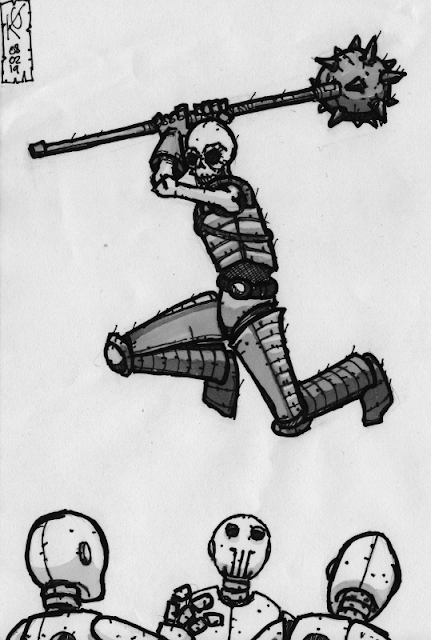 It is, of course, full of fun things for adventurers to find, including the spells needed to create more Bones, piles of treasure, and unhinged skeleton-wizard-kings.

If using races, treat Bones as human. Bones can be of any class or profession.

Bones do not need to breathe, drink, eat, or sleep -- although can mimic those actions -- and are immune to disease and poison. Bones age, but suffer no ill effects and can live forever if careful.

Bones do not heal, and healing magic -- if used in your campaign -- harms them by the same amount it would heal a living creature. Reversed healing spells may heal Bones, at the GM's discretion.

If your campaign includes the turning of undead, this works against Bones, but as their life force is stronger than most undead creatures, they are never destroyed by turning, but flee instead.

Some Bones remember the End and the rituals that changed them into their current forms, and have been scarred by these memories. A Bone player can choose to roll on the following table to generate a psychological issue relating to those memories.

I SURVIVED THE APOCALYPSE AND ALL I GOT WAS THIS LOUSY PSYCHOSIS (d12):

Update (24/07/2020): Bones cannot speak, at least not as they once did. Some have developed a complicated language of clicks and clacks; 1 in 10 dwellers of the wastes understand this language. Others make do with sign language, which is understood by 4 in 10 characters.
Scrawled unintelligibly by thekelvingreen at 4:32 pm 1 comment:

Email ThisBlogThis!Share to TwitterShare to FacebookShare to Pinterest
Labels: Bones, games, stuff that I drew, stuff you can use, Upon Deadly Sands
Newer Posts Older Posts Home
Subscribe to: Posts (Atom)