It's the Most Wonderful Time of the Year 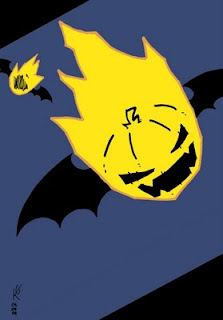 Email ThisBlogThis!Share to TwitterShare to FacebookShare to Pinterest
Labels: Fight On, stuff that I drew

Part of that is down to August and September being the busiest time of the year when one happens to work in the enrolment department of a college; early mornings, manic days and late nights all combine to make me pretty much useless by the end of the day. That's all done with now, so I can start to think about having some kind of non-work-related existence.

Also in that time, I've managed to do a handful of bits of art for Fight On! magazine, and a couple of images for some Brazilian project I don't really understand. I also drew something for Rol, but it was rubbish, so I'm starting that again. I also updated my website a bit, but I really need to (a) tidy up the comics section, and (2) do some more comics to put in it.

Somewhere in there, I turned thirty. Which horrifies me a bit, because I've done nothing useful with that time.
Scrawled unintelligibly by thekelvingreen at 6:46 pm No comments: