We did it. At long last we finished a campaign.

After almost two years the finale of Carrion Crown was a bit of an anti-climax as instead of the party fighting the big villain in a dramatic set piece battle atop his evil tower, my necromancer magic jarred him from a distance and had him fling himself over the edge.

Still, at least we got cake. 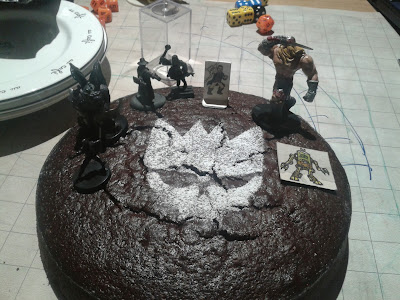 Pictured is our special celebratory Carrion Cake -- dark chocolate and strawberry with an icing sugar crowned skull motif -- and the victorious sort-of-heroes. From left to right: Tarion, the half-elf ranger/thief; Sir Erodel, the paladin/sorcerer/dragon; Norman, Nicodemus' butler and musketeer; Erodel's cleric henchman, not given a name because of church bureaucracy; Nicodemus Eldritch, monster hunter and necromancer; Veniticus, beefy cleric of Abadar; and 12939, Nicodemus' alchemical golem.

It would be sensible -- after staggering our way to the end of a long campaign -- to have a bit of a breather and play some shorter games, to cleanse the palate as it were. 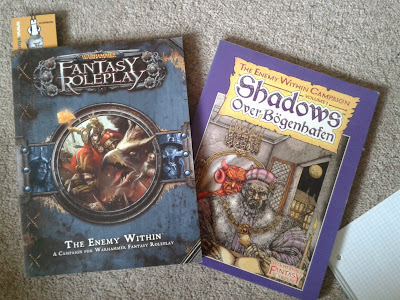 It would appear that we're not sensible.
Scrawled unintelligibly by thekelvingreen at 1:28 pm 4 comments:

The Staggering Insanity of Fourteenth-Level Pathfinder

Round one. The flying red tentacled thing, the flying white dragon, and the giant berserker are the player-characters. The group hanging around in the doorway at the left hand side of the picture are their henchmen and followers. Everything else is a monster to be bashed. 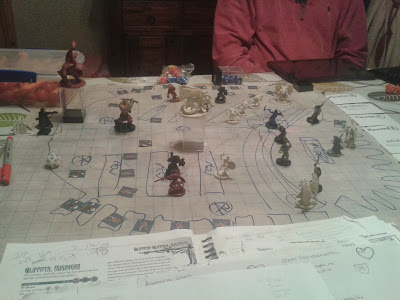 The end of round one: 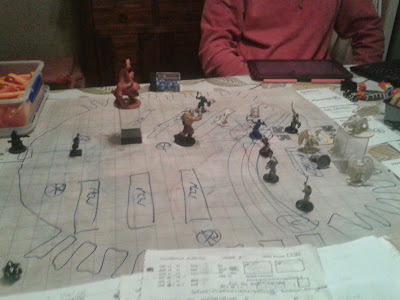 Just over a month ago The Guardian published a list of Brighton's top budget restaurants; I would second the recommendations for Iydea, Pompoko, and Pizzaface but I've not been to the rest -- or I have been but so long ago my experience is probably not relevant -- so I can't offer any insight there. Aside from La Choza. We're not very good at Mexican food here in Britain, no doubt due to the lack of a significant immigrant population, so that's something I've missed since moving back here. La Choza is quite good -- and not only by low British standards -- but it is a bit Guardiany, if you know what I mean.

About five minutes away, in a part of town that's a little rougher around the edges and not at all the sort of place that Guardian writers go, is Los Taquitos. The décor isn't anywhere near as precise and considered as that as La Choza's and the place does feel a little bit like a late-night burger or kebab shop -- a number of which can be found nearby -- but if you want a good burrito at a good price, Los Taquitos is the place to go. 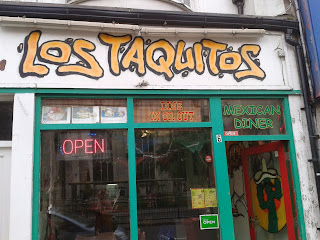 I'm by no means an expert, but to me Italian food is better the more basic and rustic it is -- the very idea of fancy Italian food baffles me a little -- and I suspect that this has more than a little to do with a chance encounter I had with a young Italian couple in Paris many years ago, who were proponents of huge pans of cheap and cheerful home-made sauce sloshed all over big plates of pasta. I feel much the same way about Mexican food, which may well be unfair to the cuisine of Mexico, but seems right to me -- again, I'm no expert -- and that's the kind of approach you get at Los Taquitos. I've only had the vegetarian options but they've been excellent in both flavour and value; I tend to go for the vegetarian chilli burrito, which is huge, about £4.50, and is the tastiest I've had in this country.

This isn't a restaurant review -- not being able to try two-thirds of the menu means I'm not qualified for that -- but more of a recommendation. It's in a bit of an odd part of Brighton but if you like Mexican food, then you must make the effort to visit Los Taquitos, because it's ace.
Scrawled unintelligibly by thekelvingreen at 11:37 pm 2 comments: