It's #drawdeathsheadday and it's also Mother's Day, so here's Death's Head and his "mum", Pyra. 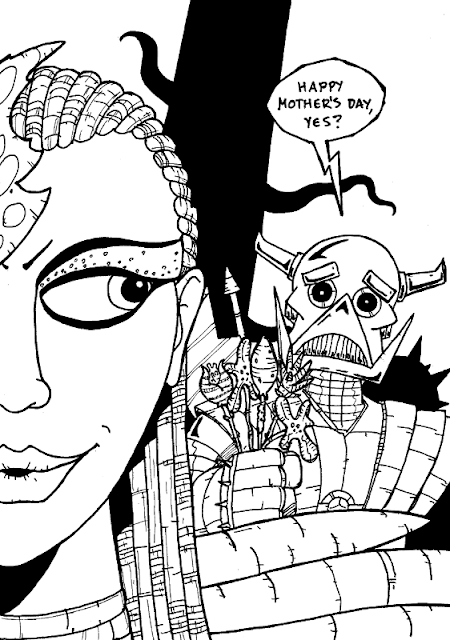 Scrawled unintelligibly by thekelvingreen at 2:21 pm No comments:

I mean, one of them might be called "Cooper". Maybe. 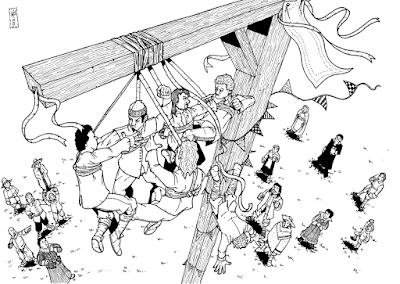 Scrawled unintelligibly by thekelvingreen at 9:49 am 2 comments:

I drew a thing. I hope you like houses and trees and mountains. 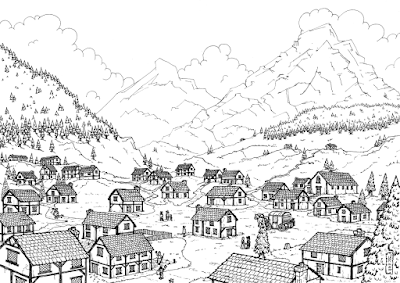 This is from something that I think will be properly announced soon.
Scrawled unintelligibly by thekelvingreen at 10:16 am 2 comments:

As expected, the match against the Norse team, my final game of the season, resulted in a loss. It did not go as badly as I expected, so that's something.

The Purple People Eaters were going into the match with a number of players missing, including vampire star player Gary, and no substitutes. The opposing team was of a much higher team value -- Blood Bowl's rough metric of team quality -- so I was able to recruit a star player -- Wilhelm Chaney, again -- and a wizard.

I used the wizard early, which was probably a mistake as he failed to achieve much and was probably better as a deterrent. Chaney was better; I relied on him less as a playmaker this time and instead used him as a general distraction and nuisance. My opponent deployed resources to keep the werewolf caged, which gave the rest of my team some wiggle room. 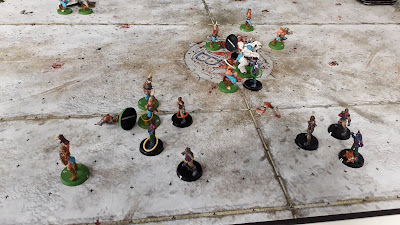 Overall the match was much less one-sided than I expected. I lost, of course, but I got a lot of possession, and did pull off a late and risky passing play that led to a touchdown -- and star player points for my vampires! -- so at least it wasn't a total rout.

So that's the end of my first ever season of competitive Blood Bowl! I did not achieve my goal of at least one win but I did manage three draws, which isn't too bad. Despite the overall results, I feel that I'm okay at defensive play -- although there's obvious room for improvement -- but I need to get much better at attacking.

My main issue, I think, is my general cautiousness. Blood Bowl is probably about 50% field position and 50% risk management, and I find myself reluctant to push forward and tend more towards avoiding risk entirely. This is a problem and does not lead to successful play. I found that in this last game, when I had little to lose, I was more confident -- or reckless -- in getting my players up the pitch and my game went better as a result.

This is obvious to any coach with half a brain cell but it took me ten games to realise. Sitting behind the halfway line and turtling is a good way to defend -- until the opponent breaks your line -- but going forward and putting multiple players in your opponent's half is what forces them to make decisions, commit their own players, potentially change their plans, and perhaps make mistakes. It's also much more fun.

In terms of the risk management, I think vampires tend towards the unpredictable and unreliable as it is so I probably should lean into that rather than try to avoid it. They are going to cock up anyway so I may as well embrace that rather than letting it stifle me.

Going into Game 10 I wasn't sure if I was going to take the Purple People Eaters into the next season or if I would drop them for another team. I think I will stick with the vampires, because I would still like to get one win with them, and I think I'm getting closer to working out how to do that. Vampires are also great fun to play; I wanted an unpredictable team because I wanted to be surprised as I played, and the bloodsuckers have lived -- ho ho -- up to that expectation.

I have ended the season with a coffer full of gold coins and a changing room full of broken and injured players, so I have some staffing decisions to make, but bring on Season VI!
Scrawled unintelligibly by thekelvingreen at 12:38 pm No comments: