(Click for a bigger version. No need to squint!) 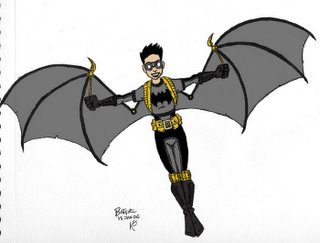 Email ThisBlogThis!Share to TwitterShare to FacebookShare to Pinterest
Labels: Batgirl, self promotion, stuff that I drew

Do You Need A Toothbru-u-u-ush?

Is this the first time that a comic, not a comic character, or a film based on a comic or whatever, but an actual ink-on-paper comic, has had a theme tune?

With this and FIN FANG bloody FOOM, Nextwave could quite possibly the most Airwolf comic Marvel have published in a long time. 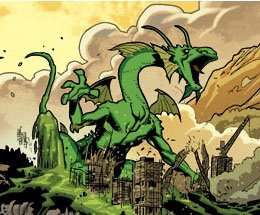 Scrawled unintelligibly by thekelvingreen at 6:57 am 3 comments:

Mark Off Of Eastenders (And Qui Gonn)

Fantastic. SciFi are cretinous for not jumping all over the new Doctor Who, but they get points back for randomly showing Krull. Really, this film should be on at least once a month.
Scrawled unintelligibly by thekelvingreen at 4:30 am 5 comments: 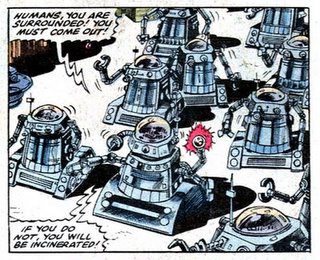 In Power Man and Iron Fist #79, a comic from the March of 1982 (and thus one that outlives both the blaxploitation and kung-fu fads that spawned the characters by a number of years), the titular twosome run into a race of robot-like beings that trundle about (because they have wheels in place of legs) shooting lasers at people while proclaiming that "YOU WILL BE INCINERATED!"

Our heroes flee from the tinpot fascists and take shelter in a nearby shop, where they discover something rather unusual about the interior. 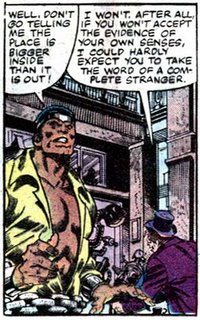 It turns out that the "shop" is in fact a time machine merely disguised as a place of business, and that the owner and pilot, Professor Justin Alphonse Gamble, is a rogue member of the Time Variance Authority, a group that oversees and fixes problems in the timeline.

Gamble, Iron Fist and the Avenger Formerly Known As Power Man join forces to fight the dastardly monsters, with the heroes doing the smashing, and Gamble doing the thinking and the technological jiggerypokering. Once the baddies are defeated, Gamble disappears in his time machine, leaving an empty space where his "shop" once stood, and a couple of confused superheroes.


On a not-related-at-all-no-siree note, the Beeb have put up an director/writer/producer commentary for The Christmas Invasion up here. It's just a tiny bit fiddly to get it running at the same time as the show itself, but it's a nice little free extra nonetheless.

Email ThisBlogThis!Share to TwitterShare to FacebookShare to Pinterest
Labels: Avengers, comics, Doctor Who

Last night I dreamed that I was doing an undergraduate degree in baking, as taught by Richard Gere.

What's that all about then?
Scrawled unintelligibly by thekelvingreen at 2:48 am 2 comments: