The other day I waffled about food in role-playing games and now here we are.

Roll 1d100 to determine your character's favourite foodstuff. Maybe eating it improves their morale, or if eaten during a rest your character gets extra healing. Dunno. I leave that up to you.

Email ThisBlogThis!Share to TwitterShare to FacebookShare to Pinterest
Labels: breaking your game, food, games, stuff you can use

I stumbled across this art today: 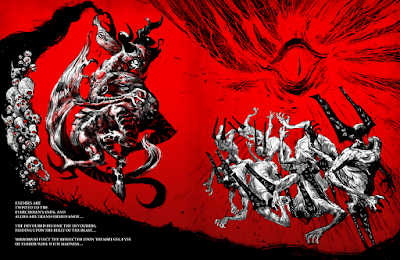 (I discovered that it's from a 2015 Age of Sigmar book and I can't tell you who the artist is because in 2015 Games Workshop wasn't big on giving credit to individual staff members.)

What struck me about the picture was how different it is to the standard GW house style, which tends to be more painterly. Actual drawings have very much gone out of fashion in Nottingham, so I was surprised but happy to see eight pages of this at the beginning of the book.

Alas, it's presented as a flashback and the final page blends from this style into your bog-standard GW painting, so there's a sense that it's literally "only a dream", but it's still nice to see a different style of art appear in a modern GW product. Maybe there are more that I have missed.
Scrawled unintelligibly by thekelvingreen at 2:37 pm 2 comments:

Yummy Yummy in My Tummy

Patrick Stuart has written an interesting post about tweaking the rules of D&D -- or rather tweaking how you use the rules of D&D -- to encourage a different play style, one that is gentler and more social. One of the things he talks about is food, how the sharing of food is an important social ritual, and how that could be reflected in a game.

(Be warned, I am now about to miss about 98% of the point of Patrick's post.)

That got me thinking about how food is used in role-playing games, or rather how it isn't. Meals and rations appear on equipment lists and you may have one of those GMs that pays attention to whether the player-characters are eating enough, but for the most part it's either a background element or a nuisance, a "starvation counter" that needs to be managed along with how many arrows or torches you have.

It seems a bit of a waste and it would be nice if more were made of food in games, as Patrick suggests.

(It's interesting that what fantasy games have taken from Lord of the Rings is the long walks but not the many, many pages of discussion of what the characters are eating and how it tastes. That's a bit weird.)

I've always been fond of how food is used in Fighting Fantasy, perhaps because I grew up reading-playing the books. There food is presented as a source of healing; if you are stabbed by a GOBLIN then you get better by eating sandwiches. It's an abstraction to the point of nonsense but the silliness is part of the charm. I love the idea of a battered group of adventurers having a picnic and emerging healed of their wounds. 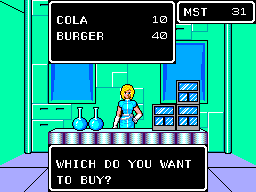 Food-as-healing seems common in computer games, I suppose again because it's a useful abstraction that sort of makes sense, and the immediacy of the idea works well in context. Another seminal influence on my philosophy of games -- ludo-philosophy? -- is Sega's Phantasy Star, which has a science-fantasy setting somewhere between Greek myth and Star Wars, and in which the main healing items are burgers and cola. Again, the absurdity of the idea of adventurers going around a dungeon with a bag full of Big Macs and bottles of Pepsi appeals to me.

A recent and more complex implementation of the idea is Final Fantasy XV, which makes food the most important part of the resting mechanic, and gestures in the vague direction of the social elements Patrick is talking about. Ignis, the party butler -- they never say it, but he's obviously the butler -- cooks a meal for the adventurers every time they rest. Most of his dishes give some sort of bonus to character statistics and if the recipe is a favourite of one of the other party members, there's an added effect for that character. Travelling the world and speaking to people exposes Ignis to new ingredients and tastes that he can add to his notebook, which is a nice way to integrate the characters into the setting and reward exploration.


Almost all of the bonuses are combat related, because that's the sort of game FFXV is, so it doesn't get into the sort of thing Patrick discusses, but the fact that different characters have different favourites is a nice touch -- and one easy to pull into your average D&D game; a d100 table of favourite meals is easy enough to do -- and we are at least treated to a little cut scene each time, with the lads sitting around a camp fire in those flimsy folding fishing chairs, enjoying the meal and each other's company. It's a start, anyway.

Where am I going with all this? I don't know. Perhaps nowhere. I think all I wanted to say is that because of how I started in gaming I have this feeling that food should be more prominent in our games, even if it's just replacing healing potions with meatball subs and packs of Monster Munch, but it would be nice to do something more.
Scrawled unintelligibly by thekelvingreen at 10:51 am 6 comments:

Another piece for Barbarians of the Ruined Earth, which I'm sure will probably be released in 2020. 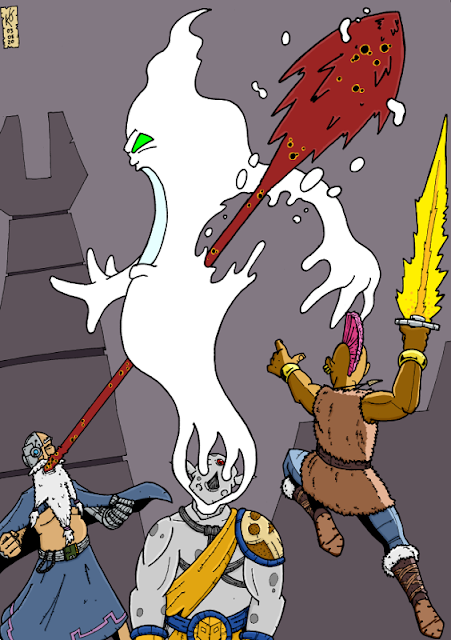 Scrawled unintelligibly by thekelvingreen at 11:30 am 2 comments: