The Laboratories of Joseph Cullen

I'm not sure if this is a spoiler or not. I think this -- along with some details of what is in all these rooms -- will be published somewhere at some point but I shall leave the details undefined for now. 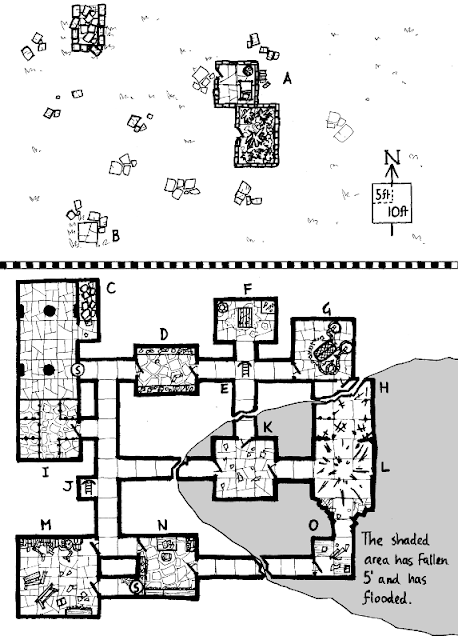 Scrawled unintelligibly by thekelvingreen at 8:19 am No comments: Links to this post

Email ThisBlogThis!Share to TwitterShare to FacebookShare to Pinterest
Labels: Joseph Cullen, Lamentations of the Flame Princess, maps, stuff that I drew, stuff you can use

This is a review of Bargain Quest by Jonathan and Victoria Ying. It's a fun game and I quite like it.

Oh, you want more? Then please enter my establishment...

See what I did there? It's like I attracted you with my shopfront, then lured you in, just like you do in Bargain Quest! So clever. Blog of the year. 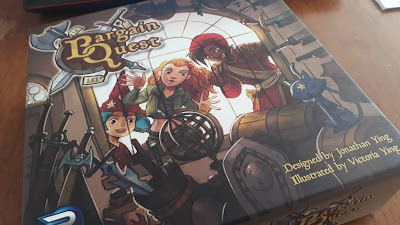 I am reviewing the second printing, which was released a few weeks ago. I missed the Kickstarter but there was a pre-order window between the crowdfunding and retail release and I got in there, which means I have a bunch of extra components you may not be getting if you buy now, but I'm also missing the Kickstarter bonuses and exclusives.

(I don't want to start with a criticism of the game, and to be fair this isn't an issue with the game itself, but a small number of the bonus items I got for buying the game before release are useless because they tie in with an expansion that Kickstarter backers got but those pre-ordering had to be buy separately. This wasn't made clear at the time, but it's not a huge problem. Anyway, carry on.)

In Bargain Quest monsters are attacking the town, and murderhobos heroes have arrived to kill the monsters and take their stuff, but the murderhobos heroes will need equipping before they go, which is where the players come in. Two to six players each run a shop and the goal is to attract murderhobos heroes then sell them a bunch of tat and hope they survive to come back and spend their loot. The shop that equips the most successful murderhobo hero and makes the most money is the best mercantile enterprise of them all and wins the game. Woo!

It's simple enough described like that but there are a lot of phases, making the game feel more complex than it perhaps is. You start by dealing random cards then drafting them; these are the items you are going to be selling in your shop. Then you place one -- or more, if you've upgraded -- items in your window. This item should attract a murderhobo hero, depending on who has wandered into town and whether the other shops have more attractive displays. Once every shop has a murderhobo hero, the players sell as much stuff as they can before sending them off to fight the monsters. 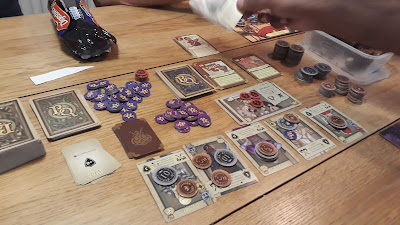 (There's a semi-cooperative element in that if all the murderhobos heroes are killed, the monsters then go on a rampage and murder everyone in the town, in which case everyone loses, but I haven't had that come up yet. It adds a bit of balance and external tension but it's much more of a distant, vague threat in comparison to something like Pandemic.)

There is a lot going on in the game and as most of it is driven by drawing random cards from various decks, the game can feel a bit chaotic and cluttered at times, but it does flow well once you've got the hang of it and it's always fun. With so much going on it is difficult to identify one approach or strategy that seems better than the others, and this seems like good design to me; do you put rubbish items in the window and hope that you can sell your good gear to whoever wanders in? Do you upgrade your shop or do you save the money and convert it to victory points at the end of the game?

(That said, there is a certain type of employee that provides a general boost to hero abilities and they seem to give a big advantage, but they don't always emerge from the employee deck.)

Some cards also modify other cards and mechanics when played or revealed, and this adds another level of complexity and interest. A monster might affect whether shops can upgrade this turn, or a murderhobo hero may buy items for more or less money than normal. With this added complexity comes some murkiness in terms of mechanics, such as the timing of effects and whether cards are discarded or kept or even returned to the deck, but I have found that there's nothing so confusing that it doesn't have a logical interpretation that can be agreed by the other players. 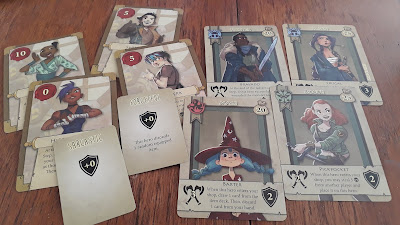 Some of my group disliked the randomness of the mechanics, in particular a sort of personality card that is attached to a murderhobo hero after they've been equipped but before they face the monster, because a poor card can scupper an entire turn's planning and strategy. I do sympathise but I love randomness in games, in part because it's funny when your super tank paladin loses all his weapons on the way to the dungeon, but also because I am terrible at all board games so I never have a strategy that can be ruined. I admit that I am perhaps in a distinct and quite strange minority.

The game has great presentation. It all comes in a compact box and given it's got one of those Fantasy Flight Big Useless Insert™ things, you can even fit an expansion or two in there. The components are sturdy and the cards look like they will stand up to the metric fudgeton of shuffling the game requires.

It also has great representation, with lots of people of different ethnicities and genders on display, although I would have liked the artist Victoria Ying to lean more into the fantasy element and give us more blue, green, and orange people alongside the brown and pink. I do have a robot in my set, but I think it's a pre-order bonus. 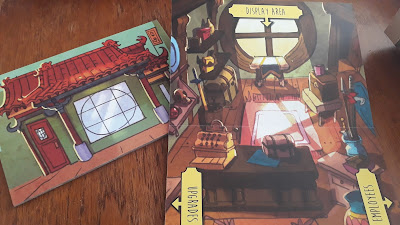 Ying's art takes a quaint, heartwarming, almost whimsical approach reminiscent of that of Kazu Kibuishi, or Ryan Laukat's art for Above and Below. It's D&D through a Disney/Ghibli lens and it's lovely without being twee. The individual shop playmat things are perhaps my favourite pieces, evocative environments that you don't want to spoil by laying cards over them.

The title is rubbish though. It's neither evocative nor descriptive, and instead falls into some half-arsed agonising beige abyss betwixt the two, but I'm not going to suggest you avoid it because of that.

In fact, I suggest you do the opposite of avoiding the game, which is... er, buying it, probably. If you can find it, that is. It seems to be out of stock or at a pre-order stage everywhere, including direct from the publisher, but there is a print-your-own version you can buy from the designers. However you get it, get it, because it's ace.

(It's also reasonable in terms of price at about £32, but even I have standards and the obvious pun is below them. Just.)

But wait, before you go, I have a special offer for you! 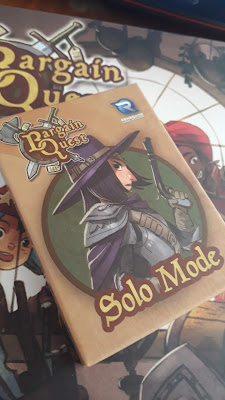 As a pre-order bonus I also got the Solo Mode expansion. This does exactly what it says on the tin. Box. You get a small deck of cards and a little rules booklet that together modify the game so that you are competing against a vague, nebulous cloud of competitors that you never see. It's a bit weird because there are no other items or shops and when the murderhobos heroes go to the competitors, they disappear from the game, so it feels like half the game is off in some strange ghost dimension.

Perhaps I'm overthinking it, or perhaps the expansion should be called Strange Ghost Dimension Shopping. You decide.

Anyway. The solo mode works in much the same way as the base game but skews things a bit here and there and as such is both easier and more difficult, which I know makes no sense, but there it is. Your shop can suffer damage, and the apocalyptic losing condition remains and is a bit more pressing with murderhobos heroes disappearing each turn, but is still probably not going to happen unless things go very wrong. On the other hand, winning is much easier as the Strange Ghost Competitors don't score any points, but there are degrees of victory so the game becomes more about beating your own high score.

I think Bargain Quest works best as a group game because you can steal each other's murderhobos heroes and money, and laugh with each other when someone keeps sending murderhobo hero after murderhobo hero to fight monsters with nothing more than a pair of old boots, but it is a fun enough game that I will play it solo now and then. Would I buy the expansion if I didn't get it with the game anyway? I don't think so, but that's just because I'd prefer to enjoy it with others.