I wasn't going to discuss the Dwimmermount imbroglio. I didn't contribute much to the Kickstarter and it doesn't seem like my place to comment on James Maliszewski's morals or personal circumstances. That said, there have been a couple of developments of late that have caused me to reconsider. 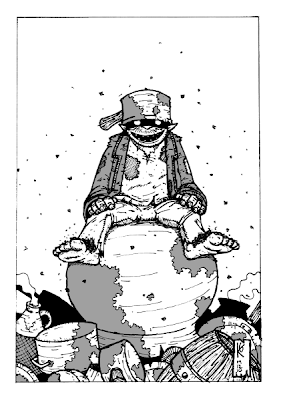 The first is that I have my own crowdfunded project that is running very late. Horror Among Thieves is far from dead, but I find myself unable to devote as much time to its completion as I'd like. It will be finished, and those who supported the project will be getting something extra to -- I hope -- take some edge off the interminable wait. People have called for James to hand Dwimmermount -- a near-complete manuscript exists, it seems -- over to someone else to manage and publish since he cannot do so himself; I see the wisdom in that suggestion, and it made me look at what I was trying to achieve with Horror Among Thieves and see if I should do something similar. I am confident that completing the adventure is within my abilities, but when that will happen I don't know, though I hope it will be soon. My own lack of productivity on the, er, product annoys me no end; James had a whole megadungeon to publish but I only have a small adventure to write and I can't even get that out the door on time. I feel terrible that Horror Among Thieves is the first project of my own that I can call professional, and yet I've been less than professional in its production; I don't want to be known for lateness and unreliability, and so my hope is that at least the final product will be a good one. Even if not, I have learned some valuable lessons.

James was working on another project alongside but unrelated to Dwimmermount, a collection of minor deities called Petty Gods, and that too has languished in development heck, until now. Greg Gorgonmilk has decided to resurrect the project in James' absence and has put out a call for the contributing writers and artists to get in touch. I'm pleased to see the book's potential return, in part because I'd contributed three drawings to it -- such as Fluxalle, the god of rusted cookware, above -- but also because I like the idea of making use of the inventiveness of the gaming community to produce something fun and free for everyone.

Greg hasn't yet tracked down all of the original artists and writers, so if you are or know one of them, then get in touch with him here. I believe he's also looking for new contributions, if you'd like to get involved.
Scrawled unintelligibly by thekelvingreen at 8:36 pm

Email ThisBlogThis!Share to TwitterShare to FacebookShare to Pinterest
Labels: Fluxalle, Forgive Us, Horror Among Thieves, Lamentations of the Flame Princess, my so-called life, Petty Gods, self promotion, stuff that I drew