Having discovered that the villagers of Mistheim were still alive, Rudiger, Magnar, Aelric, and Thorek -- what do you mean the slayer was back at the barge? -- launched an attack on the beastman camp. Their plan was to pick the beastmen off with ranged attacks and force any survivors to charge uphill to engage them in hand-to-hand combat, and for the most part the plan worked, except that some of the beastmen spotted the player-characters moving into position and the shaman seemed to have misunderstood his role and refused to die.

Even so the fight was not much of a challenge to a party that was by now becoming quite adept at the art of killing; the only real worry was an attempt by the shaman to take control of Magnar and force him to attack his fellows, a ploy that only failed through the use of a reroll the players had earned earlier in the campaign. Boo, hiss, etcetera.

Eyeing up a pair of ominous caves into which one of the beastmen had fled they sneaked into the camp to free the imprisoned villages then hurried them into the forest before any reinforcements could arrive. Meanwhile, back at the barge Poddo Bayleaf -- in theory the party's field surgeon but as a halfling also an adept cook -- was showing Drandruel, Yan, and Yan -- and definitely not Thorek, no siree -- how to make a tasty stew from fresh, natural ingredients and so engrossed were they all that no one spotted a trail of suspicious bubbles near the barge. As such everyone was rather surprised when a river troll lurched from the waters, snapped its jaws around the neck of one of the party's horses, and dragged the poor beast into the murky depths.

This was, I admit, a bit cruel of me. Drandruel's player was not present and Poddo and the two Yans were not what one may call natural combatants, and chucking a river troll at them while the heavy hitters were scrabbling through the woods was a bit harsh.

Of course I chucked a second troll at them too, because I am a moustache-twirling villain of the basest sort.

Even Drandruel, the Michelle Yeoh of the Great Forest, couldn't do much to fight off two of the stinking, dripping monsters, and Yan and Yan were having enough trouble staying alive, let alone fighting back. Thank Sigmar for Poddo Bayleaf then. The halfling surgeon had been bashed and beaten over the course of his journeys with the party but his enthusiasm for adventure had never waned and so he picked a hot coal from the cooking fire and sent it flying from his hitherto unused sling at one of the trolls. A 10 rolled for damage was followed by another and I think one more, and the troll stumbled from the barge with a smoking hole where its eye used to be. The fight went more in their favour after that.

Soon the rest of the party returned to find a pair of shaken boatmen, a beaming halfling, and one fewer horse than they left behind; I don't know if Rudiger, Magnar, and Aelric believed the others, but Thorek was probably annoyed that he'd missed out on killing trolls as he'd never quite ticked that one off his list. Still fearful of a horde of vengeful beastmen pouring out of the woods the party decided to take the surviving population of Mistheim with them downriver -- the extra space created by the missing horse came in handy here -- and this time everyone was eager to leave the blighted village. 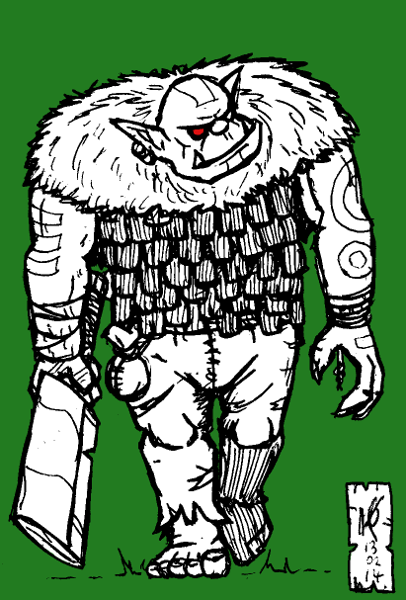 The villagers were packed on the barge while the party travelled by road, a decision which caused some concern as they lost sight of the river now and then; as it turned out they needn't have worried about the boat. The party's scouts heard a commotion in the trees as something barrelled towards their position but were not quite quick enough to prepare the others for the arrival of a small orc warband mounted on boars and a gaggle of goblin archers. As if that were not bad enough the orc boss, a hulking brute with a ragged hole where his eye once was took one -- two-dimensional -- look at Rudiger and roared "I know yer! Yer took my eye!"

I didn't expect this fight to be much more than a speed bump on the way to the next town but Warhammer Fantasy Roleplay surprised all of us once again with its capacity for swingy chaos and what should have been a challenging but resource-draining battle became something quite special.

Rudiger wasn't keen on reacquainting himself with the orc boss and the party thought that eliminating the creature first would send the others running off in a panic; a sound plan making good use of knowledge of orc and goblin psychology, but one thwarted by capricious dice as the greenskins would not budge, even when the boss was felled.

The other boarboyz made a nuisance of themselves, hacking off chunks of the party and the boars themselves goring the party's horses and almost killing one or two. Before the boss expired he had given Rudiger a bit of a kicking and one of his boyz almost finished the Ostlander off, and it's fair to say that Rudiger's courage wavered a bit but even so he leaped back into the fray. Over on the other side of the battlefield Drandruel weaved back and forth slicing and dicing and leaving dead goblins in her wake while Thorek, giant slayer and possessed by an ancient hatred of the greenskins, er, failed to hit a single goblin throughout the entire fight.

None of us could quite believe this. Thorek has a habit of almost getting himself killed -- as befits a slayer, to be fair -- but that's more to do with poor tactical reasoning than incompetence. So it was a bit of a shock as this little bundle of muscle and frenzied brutality spent the battle waving his flail at a group of sniggering goblins to no effect as they stabbed him in his remaining kidney.

There was one more surprise to come as Aelric lost control of his magic twice during the fight, the second time resulting in a vision of an otherworldly -- one could say Chaotic -- realm, another insanity point, and, oh, a second mutation! Already burdened with a skull-like face, the elf's head was now also burning with a bright and quite unnatural flame and this is why WFRP has the best magic system.

Even with all that stacked against them, the party did defeat the orcs and goblins and a couple of days later staggered, bloodied and bruised -- although on the plus side, Aelric's head had gone out -- into the hamlet of Krankendorf. There they noticed that the settlement's protective wall had been breached -- the work of a mysterious monster, it was said -- but were eager to get some rest and booked themselves in at the charming Red Empress, an inn named after the infamous Empress Magritta, one of the satirical puns Games Workshop doesn't do any more.

Aelric sensed that something was not quite right and -- having not learned his lesson about frivolous spellcasting -- conducted a ritual to divine the future and discovered that an attempt would be made to steal the now purified bell clapper the party had been carrying with them all the way from Averheim. The elf alerted the others to the danger and they abandoned their separate lodgings to pack themselves into one room so that they could watch over each other during the long night ahead. Alas, tired as they were from their exertions they all fell asleep although one or two of them woke up just in time to see a figure clad in black robes leap out the open window.
Scrawled unintelligibly by thekelvingreen at 10:07 pm