(For a suitably comedic look at the campaign so far from a player's perspective have a look at Stuart's blog.)

After a brief break for a bit of Savage Worlds we returned to The Enemy Within II: The Wrath of The Enemy Within last week, picking up in the aftermath of the worst garden party ever. Both dwarves had been dragged off to the temple of Shallya for emergency treatment, leaving the thief Rudiger Adler and the elves Aelric Shadowstar and Drandruel to investigate the scene of the crime. Some good and clever investigation turned up a number of clues including a possible connection between the wound that enraged the rampaging griffon and the bodies found at the docks, and an unusual throwing star that gave Aelric a sickly feeling deep in his stomach when he touched it.

There was an interesting clash between player and character knowledge at this point as a couple of the players suspected the involvement of skaven but in the setting most people consider the rat men to be an urban legend; to the considerable credit of my players they kept to what their characters would have known and it was made a bit easier for them by having two dwarves in the party -- dwarves being well aware of the existence of the skaven, Magnar describing them to an incredulous Aelric as "light and agile, like elves, but living in sewers" -- and by the wizard Konrad Mauer identifying the throwing star as a weapon used by the creatures.

Things moved fast after that. With Thorek and Magnar out of immediate danger the party put their clues together and decided that there was something fishy going on at the docks. Ho ho. Their investigations brought them to a certain building on the waterfront and that is where things started to go wrong. Thorek blundered into a trap and set off an alarm, forcing the party to think fast and abandon a more stealthy approach, then he decided to run off and circle around to assault the building from the other direction. By himself.

This may seem like a rather stupid thing to do and perhaps it is, but Thorek is a trollslayer, dedicated to dying in glorious combat with some fearsome beast, so it is also rather in character.

Inside the building the party found a skaven sorcerer who waved his little claws in elaborate patterns in the air and vanished in a puff of green smoke. They also found a seven foot tall skaven mutant who -- alas for them -- did not vanish. 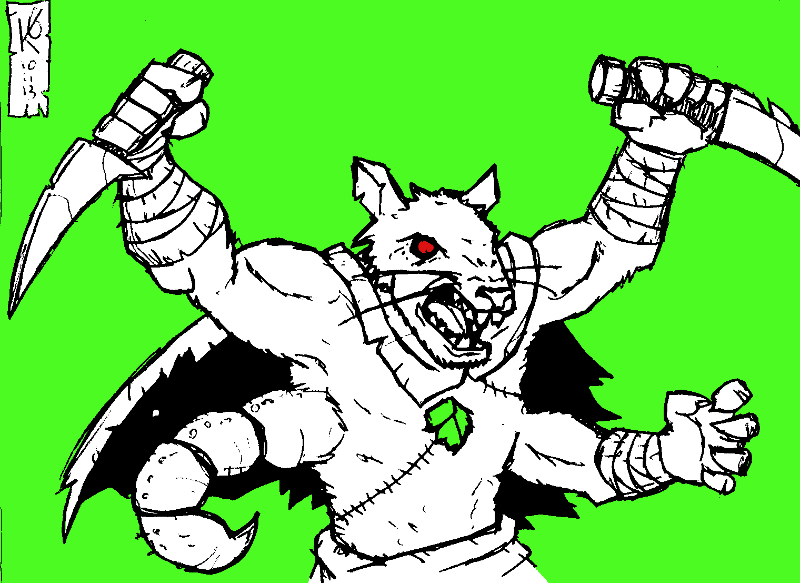 The Warhammer Fantasy Roleplay rules on fear are quite brutal and both dwarves found themselves frozen to the spot as the frenzied giant bipedal rat launched itself at them. Everything went a bit chaotic -- small "c" -- as the trollslayer was smashed into a pulp for the second time in as many days, Aelric got his ribs crushed by the mutant and then punctured a lung when trying to clamber over a wall to safety, and Rudiger had a brief rooftop battle with a third skaven before diving off the roof wuxia-style and nipping inside the building -- while the mutant was busy trying to eat Aelric -- to loot the skaven lair. Magnar, clad almost head to toe in heavy mail as he is, walked out of the fight without a scratch.

The player-characters' assault occurred in the morning so a crowd soon gathered and the skaven fled into the docks' dense tangle of twittens and ginnels. Inside the rats' lair the player-characters found the remains of most of the missing people -- although Rudiger's brother was not among the bodies -- the gold plaque stolen from the aforementioned garden party, and an odd silver bell clapper that gave off the same eerie vibes as the jade mask from the party; when later presented to Mauer, the wizard suggested that the two artefacts may somehow have been the same object.

That's where we left it, at the end of the first book of the campaign. It has gone quite fast, with three chapters being completed in four sessions but the structure of the campaign changes in the next book so it's difficult to predict if that will be just as swift. Before we get to that there are some loose ends to tie up and once again there are two members of the party in serious need of healing; in Pathfinder what happens is we kick the door down, kill all the monsters inside, then steal their stuff. In WFRP what happens is the door gets kicked down, the monsters kick the player-characters down, the player-characters steal the monsters' stuff, then they run away. I love it.
Scrawled unintelligibly by thekelvingreen at 1:01 pm