Last time on The Enemy Within 2: The Enemy Within Takes Manhattan the player-characters solved the mystery of the missing people of Averheim but were too beaten and bruised to deal with the apparent culprits, a trio of skaven, so the rat men escaped into the sewers beneath the city. As Aelric the wizard-in-training recovered under the watchful -- and expensive -- eyes of the sisters of Shallya he researched possible sources of the tome of magic he needed to progress in his studies; he identified a handful of other wizards in the city but the party decided against trying to rob them and instead focussed on rumours of an abandoned wizard's tower a day's travel from the city walls.

When Aelric and Thorek the trollslayer had both recovered from their injuries the party searched for traces of the Black Hood, the new crime boss in town; it had not escaped their notice that the skaven they faced had been wearing black cloaks. They started by trying to get retired racketeer Frederick Grosz's gang on side, only to discover that the Hood had already recruited the ruffians and had given them instructions to kill the party. Grosz'z former gang of lowly street thugs were no match for the player-characters but in the confusion of the fight the leader of the group -- and the only link back to the Black Hood -- was decapitated by Aelric's wild magic.

Frustrated, the party decided to head to the abandoned tower of the wizard Johannes Pappenheimer. There they ran into a group of bandits using the ruin as a hideout but made as short work of them as they did the gangsters back in Averheim, although the bandit leader got a lucky hit in on the otherwise near-invulnerable Magnar -- an invocation of Ulric's Fury for about twenty points of damage -- and the idea of searching the cellars of the tower for the wizard's belongings with the dwarf so weakened had them all spooked, so they chose to return to Averheim and resume the search when rested and better prepared.

A day later they arrived at the gates of Averheim to hear the sound of bells and streets thronged with people. While they were away news had reached the city that raiders from the northern wastes had swept through Kislev -- Warhammer Russia, more or less -- and had broken into the northern part of the Empire. The Emperor was raising an army to fight the barbarians and there was great excitement in Averheim with many young men signing up for the front; with no desire to fight, the player-characters decided to lie low and hope that no one noticed them. A letter on Aelric's doormat from captain of the Averheim garrison Marcus Baerfaust requesting their presence suggested that such subterfuge was already too late. 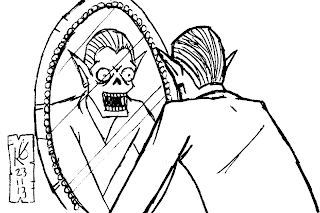 The party rested and the next morning Aelric woke up feeling quite unwell, his face feeling prickly and hot. Looking in the mirror he discovered that all the flesh had fallen from his face leaving a hideous skeletal visage; his scream brought the rest of the group upstairs and insanity points were handed out to one and all.

Back when they were running around the sewers looking for rat men Aelric had picked up a tainted throwing star with his bare hands and failed the Toughness roll to resist corruption; his body had been warping ever since but only that morning had his mutation blossomed. In the spirit of fairness I had Ben roll his own mutation for Aelric and he could have spent a Fate point to avoid his, er, fate, but he was quite sporting and decided to keep his new face.

After that shock and the subsequent discomfort of watching Aelric trying to eat breakfast, the party went shopping. They bought a decorative mask for the wizard -- they think they can pass it off either as an odd elven custom, noble fashion, or weird wizard stuff -- and secured the ongoing services of Poddo Bayleaf, a halfling barber-surgeon with perhaps more enthusiasm than experience, but also cheap, keen, and oblivious to the inherent dangers of hanging around with the player-characters. With their plucky new assistant in tow they then returned to the tower for the most underwhelming battle ever. The cellar of the tower was swamped in magical energy, clear to Aelric's witchsight but palpable even to the less aethyrically attuned members of the party, the source a secret room emanating a dull pink glow. The room seemed to be Pappenheimer's secret study, complete with a workbench covered in magical paraphernalia and a bookshelf of musty tomes. Oh, and a magic circle holding some sort of daemon. 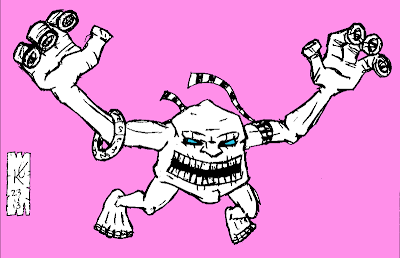 Aelric sneaked into the room to grab one of the books but before he could say "don't disturb the magic circle lest you release the daemon within" Magnar disturbed the circle and released the daemon within. The brief panic that ensued was somewhat unnecessary as the daemon failed to slap Aelric to death then was smashed into a pulpy pink goo by one blow from the trollslayer. There was a chance that the thing would either explode or multiply upon death but neither happened, to my great disappointment.

With a grimoire of celestial magic in their possession the party returned to Averheim and went to see both Baerfaust and the wizard Konrad Mauer to ask them for help in tracking down the Black Hood. To their surprise Baerfaust asked them to help him find the mysterious villain, sending them to talk to the witch hunter Adele Ketzenblum, while Mauer knew next to nothing but did give them the job of taking the corrupted bell clapper the skaven had fashioned to Middenheim for cleansing or destruction. By a curious coincidence -- and nothing to do with soft railroading -- it turned out that Ketzenblum had left Averheim and was heading for Talabheim, which just so happened to be on the way to Middenheim.
Scrawled unintelligibly by thekelvingreen at 1:37 pm