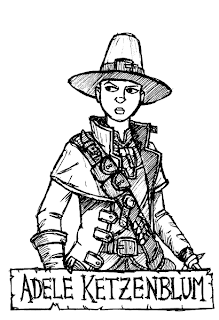 In the last session of The Enemy Within II: Freddy's Revenge the player-characters resolved to meet up with the witch hunter Adele Ketzenblum after pursuing her for weeks. The two dwarves Thorek and Magnar also resolved to not get into any more unnecessary drinking competitions -- although they'd argue over the proper definition of "unnecessary" -- before the important meeting, so that they'd be at their best if things went wrong. Alas for the party, the meeting with Ketzenblum did go a bit wrong as they let the less-than-charming Magnar do the talking. Again. I'm not sure what Magnar's exact Fellowship score is but it only just scrapes into double figures and both Rudiger and Aelric are much better speakers, although I can understand why the latter, a skull-faced mutant elf wizard, was reluctant to talk to Ketzenblum, given her profession. On the plus side, the meeting didn't turn violent, but it was clear that the party did not make a friend.

The party returned to Professor von Oppenheim to tell him about their success at the temple of Ulric, and the somewhat addled academic revealed that the ritual he expected to perform -- and that Aelric expected to result in the complete destruction of Middenheim -- was a bit more complicated than the party thought and that there was list of requirements for success, including acquiring a number of fresh wolf pelts and a quantity of powdered minotaur horn.

While this discussion was going on in von Oppenheim's study, the two dwarves headed to the college canteen for an eating competition, since they were banned from drinking while on the job. After a good few rounds of thick bread and hearty stew Magnar ended up with a stomach ache and Thorek ended up with vomit in his beard -- and across the canteen -- but also with the respect of the student body, if not the caretakers.

Rudiger knew that according to Middenheim custom the party would have to kill and skin the wolves themselves but Magnar and Aelric thought they might be able to get away with buying the powdered minotaur horn. They found a halfling market trader who claimed to have some for sale but her ruse was discovered and after some persuasion from Magnar -- it says "Intimidate" on his sheet -- she agreed to crush the horn for them if they brought one to her. This did leave the player-characters with the small problem of finding a minotaur and convincing him to give up part of his head.

Ranald seemed to smile on them -- as he would later on -- as they not only found a trader who spoke of a woodsman he'd met outside Middenheim who said he'd seen a minotaur accompanied by a tribe of beastmen, but they also found a hunter named Jost who agreed to both help them find a wolf pack and take them to the woodsman's hut.

Warhammer Fantasy Roleplay doesn't have a simple metric for determining the strength of an encounter -- there is something of a vague and half-hearted attempt in the monster book for the second edition -- but you can sort of guess and wolves shouldn't be much of a challenge to a group of characters as experienced as this party, and so it proved to be. Sort of. Killing the wolves wasn't a problem but making sure that everyone -- including a reluctant von Oppenheim -- each killed one was more difficult. As a result the last of the pack was chased around the forest as the two dwarves sprinted on their stubby little legs in an attempt to tackle it; given that both are former Blood Bowl players, one would think they'd be better at such activities.

The beastmen were more of a challenge. The party found the woodsman's hut burned to the ground and the woodsman himself eviscerated and hanging from a tree -- this was my little bit of Christmas cheer -- so Jost refused to go any further and returned to the city with von Oppenheim. The beastmen had shown no attempts to be stealthy so even the untrained party had no trouble following their trail to what seemed to be an ancient elven temple deep in the woods. The creatures of Chaos had defiled the place in the name of their dark gods by erecting some sort of altar or shrine made from offal and bones and were camping nearby; the minotaur was chained to the temple itself for some reason. 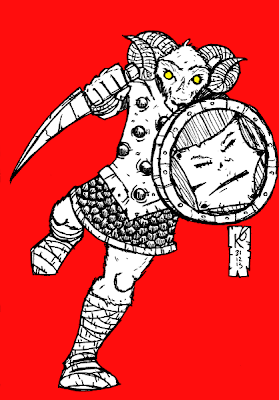 Rather than ponder the religious significance of the beastmen's odd living arrangements the party assaulted them. Or rather Thorek did. Regular readers will remember that the trollslayer also blundered into the undead-infested tomb and the skaven lair; the other members of the party are considering investing in some heavy chains for the impulsive dwarf.

Thorek was of course spotted and the rest of the party rushed to his aid. Rudiger dived into cover and Aelric held back as a voice only he could hear seemed to be urging him to stay away from the temple; the language was unknown even to him but the meaning was clear and the elf thought it might have something to do with the iron ring he'd found in the aforementioned tomb. Perhaps Thorek should get one.

The battle at the temple was the biggest fight we've had in WFRP2 so far but it was smooth and uncomplicated, even with a shaman, a chieftain, two squads of beastmen -- one of which arrived part of the way through the battle -- running around, and the minotaur too, although he wasn't doing as much running. We're not playing with the alternate initiative system any more as the players didn't like it but it would have been interesting to see how it would have worked on such a scale. After the game, the players all said that they felt genuine peril during the battle but as Ranald smiled on them again and I rolled a 90 or above for almost every attack their characters were never in much danger; the minotaur turned out to be a mutant with a magical third eye that inflicted a crippling malaise on a few of the party members and Thorek was mauled by the beastman chief -- almost losing his arm -- but they made it through the fight without too much trouble.

Poddo Bayleaf, the party's loyal barber-surgeon, was not so lucky and was spotted hanging around at the back unguarded, so a couple of beastman skirmishers started chopping him into pieces until he ran off in a panic. After the battle the party found him cowering under a bush and he soon lost himself in the cheerful work of slicing and sewing. Aelric and Magnar destroyed the altar of bones and Rudiger discovered a secret compartment in the temple pool; it contained a number of scrolls but the water got in and ruined them before Aelric could examine them.

Next time, the party returns to Middenheim for the all-important ritual -- assuming they are not waylaid before then -- and we see if Aelric's doom-mongering proves to be accurate. The death clock is ticking for Thorek at least, as the trollslayer is now out of Fate Points.
Scrawled unintelligibly by thekelvingreen at 5:15 pm