Bloody Chunks of Frazzled Thugs (or, Never Trust a Tilean With a Spider)

(You'd best make a cup of tea; this is a long one, as the actress said to the bishop.)

It was a hot and foggy morning in the Imperial capital as the player-characters set out to clear their backlog of tasks and jobs. Keen as they were to keep in Clothilde von Alptraum's good books they went to the Temple of Drama first to investigate the cancellation of the play that Clothilde was so eager to see. It turned out that the company was missing both a vital prop and their lead man; the former was a giant spider, and that little fact suggested a possible reason for the latter's disappearance. The player-characters ran into Carlo Spinezzi, a furtive and jealous understudy, and convinced -- they are getting quite good at threatening people -- him to admit that he had murdered the lead actor Nikolai di Fortessi and had freed the spider as a cover.

The spider was found stuffed into a box -- and quite angry -- in a store room beneath the theatre; also discovered were three barrels of gunpowder, enough to flatten half the building. Spinezzi claimed to know nothing about the explosives and while the player-characters were certain that the goal was to kill Clothilde they couldn't work out how cancelling the play, er, played into that. Still, they had the matter of a kidnapped elf to investigate and it was almost time for lunch so they took the gunpowder -- as "evidence" -- and dragged Spinezzi to the local watch house. 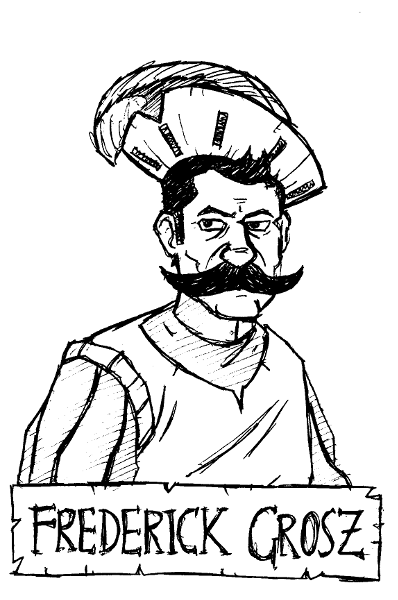 On the way back they spotted Frederick Grosz ambling down the street towards them, oblivious to their presence. This was notable not only because Grosz was supposed to be in Nuln but also that he'd been named on the Mysterious Note™ that had tipped them off about the kidnapping; they were convinced of his complicity when he spotted them and then legged it down an alley. Even with a couple of stumpy dwarves in the party Grosz couldn't outrun the player-characters and soon they began persuading him -- see above -- to tell them what he'd been up to since they last saw him.

(In hindsight this encounter looks a little too convenient but it was a genuine coincidence; this section of the adventure is based on a strict timeline and had the player-characters taken a little longer at the theatre or watch house they would have missed Grosz and their chance to rescue the kidnapped elf.)

Grosz revealed that he had been working for the Black Hood -- shock, gasp, etcetera -- and that he had indeed organised the kidnap of Eothlir. His associates were lurking on a riverboat named the Restless Spirit waiting for Grosz to return; they had been told to take Eothlir to Carroburg and wait for further instructions from the Hood. Grosz could give no clues as to the Hood's identity as the mysterious villain had been clad in, er, a black hood, but he did tell them where he'd met the Hood-- an establishment known as the Holy Hammer of Sigmar -- and promised to take the party to the Restless Spirit.

An unusual and brutal fight then followed as everyone got into a bit of a scrum around the boat's small cabin door and Aelric tossed lightning bolts into the tiny space behind; soon the cabin was packed full of bloody chunks of frazzled thugs and a small number of terrified survivors, all of whom were keen to surrender as soon as possible. Also present was Eothlir, tied and gagged in a corner and staring in wide-eyed terror at Aelric, whose head was engulfed in eldritch flame once more.

More persuasion -- see above -- followed as Magnar and Aelric were convinced that Eothlir knew why he had been kidnapped and that Grosz knew who the Black Hood really was and that both were being evasive on purpose. Neither belief turned out to be accurate and Grosz's cooperation was rewarded with a trip to the bottom of the river; there was some debate over whether the elf should also take a swim -- something something something dark side something something something complete -- but in the end he was allowed to live. As he hopped off the boat, Eothlir mentioned that he had an appointment with Friedrich von Kaufman to discuss an expedition to the Southlands that he had sponsored; as a long-forgotten plotline screeched into view the player-characters blinked at each other for a moment then pursued him to find out more.

The elf had been the captain on the voyage to the Southlands that had resulted in the discovery of -- among other things -- the jade mask that had later been stolen by skaven and melted down to make the tainted bell clapper that had been causing so much trouble. Eothlir thought there was something dodgy about the mask and wanted to warn von Kaufman of the danger; with their two major tasks for the morning completed the player-characters decided to accompany the elf to his meeting.

Along the way they couldn't help but notice a commotion at the theatre. Upon investigation it transpired that the performance had gone ahead as a result of their efforts earlier in the day but during the play Clothilde von Alptraum had been stabbed by two assailants, employees of the theatre company; the Gravin had survived and was recovering at her town house and the would-be murderers were in custody at the watch house.

Somehow the player-characters managed to convince the guards that they had the right to see the prisoners and recognised them as two members of support staff for the Tilean actors. After more persuasion -- see above -- the player-characters not only had confirmation that the Hood wanted Clothilde dead -- the stabbing was improvised after the discovery of the gunpowder scuppered the original plan -- but that the Hood was indeed based at the Holy Hammer of Sigmar. They were rather more surprised to discover that the Hood was -- according to the failed assassins anyway -- a woman, information that if true threw all their theories of the villain's identity out the window. 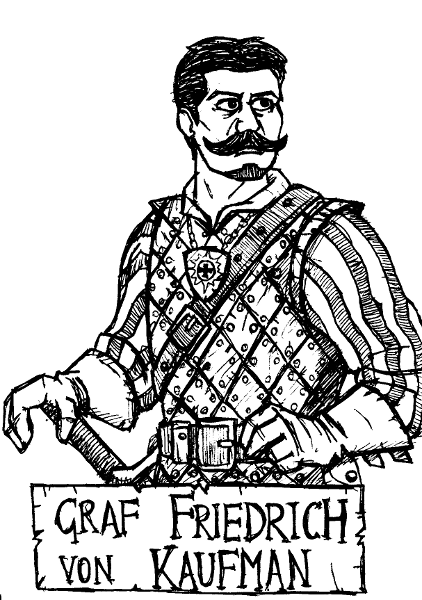 Upon meeting with von Kaufman at last they learned nothing new about the mask -- indeed, it was the noble who learned the most as they'd been too paranoid to tell him about the skaven and the bell clapper back in Averheim -- but they did note that von Kaufman had done very well out of the recent war with the Chaos marauders and that he had become a bit of a rising star in Altdorf; as such he was due to attend a special service at the temple of Sigmar the next day alongside a number of other muckety-mucks, and he invited the player-characters to attend as his guests. The players know a set piece encounter when they see one so the characters were enthusiastic in their agreement.

They also took the opportunity to report back to an exhausted Marcus Baerfaust on their less-than-successful mission to find out what Adele Ketzenblum knew about the Black Hood, and then visited an addled Konrad Mauer to deliver the purified bell clapper and report the death of his friend Robertus von Oppenheim; both Averlanders seemed worse for wear as a result of their duties at the ailing Emperor's bedside and neither seemed to relish being the heroes of the day. 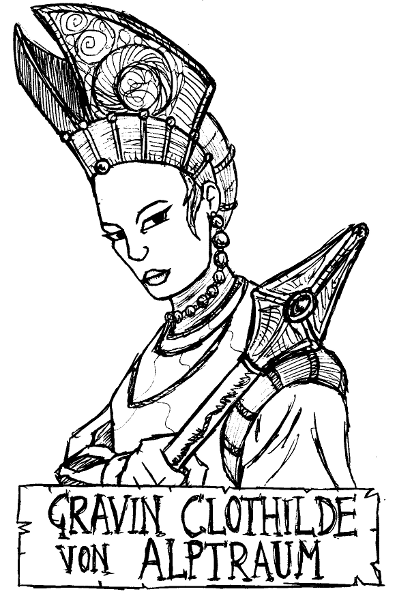 Having done their rounds of the prominent non-player-characters and being no closer to pinning down the Black Hood's identity -- frontrunners at this point were Baerfaust, von Apltraum, and Ketzenblum -- the party decided to investigate the Holy Hammer of Sigmar and see if they could catch the Hood. Waiting until nightfall -- and with the Chaos moon Morrslieb high and full in the sky -- they gained entry to the insalubrious establishment but found that the Hood and his or her henchmen had scarpered earlier in the day leaving behind no clues other than a forgotten piece of plate armour of good quality. The staff were persuaded -- see above -- to reveal that a woman with a scar on her face had left in the company of a number of burly, militaristic-looking men that afternoon. Could this scarred woman have been the Hood?

The next day the party rose early and went to visit Clothilde von Alptraum. While weak she was pleased to see them and didn't seem to mind when they insisted on examining each of her maids and servants for scars. As the breakfast meeting came to a close, the Gravin expressed her intention to recover enough to attend the service at the temple of Sigmar later that day, causing a suspicious Rudiger to proclaim upon leaving the town house that "If she doesn't turn up, then she's clearly the Hood, and we should kill her."
Scrawled unintelligibly by thekelvingreen at 8:37 am