The first entry in my top ten may have come as a bit of a surprise but this next one is perhaps more predictable, if only because like many British gamers of a certain age, if you cut me I bleed Fighting Fantasy. 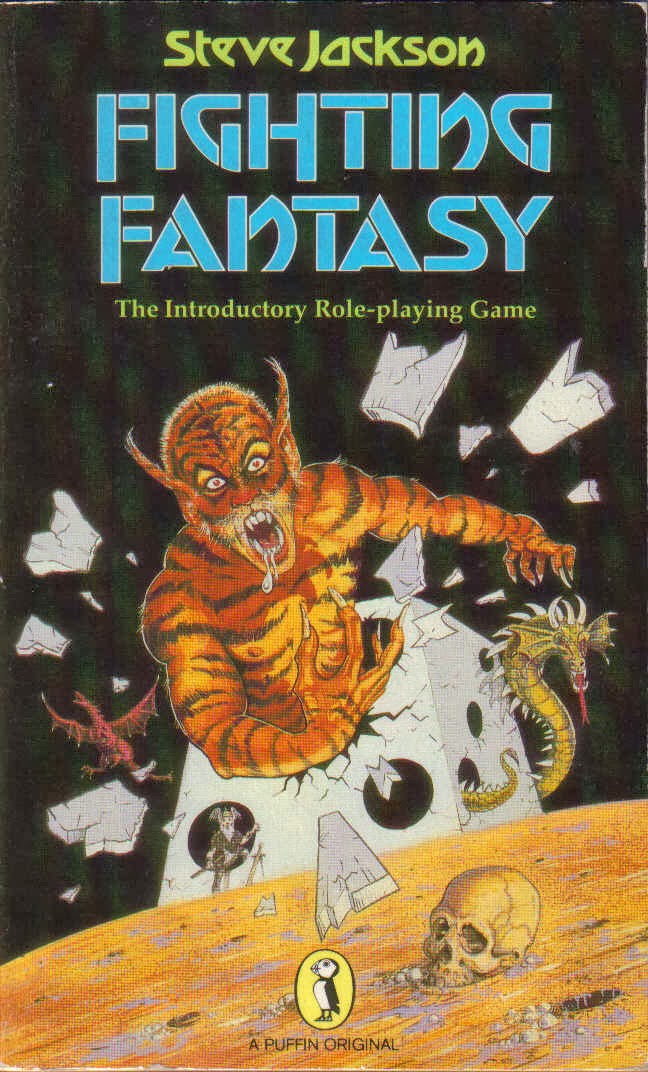 The Americans all seem to have started their fantasy adventures with The Keep on the Borderlands, but for us on our rainy, windswept isle, it was The Warlock of Firetop Mountain. Well, for me it was Masks of Mayhem and that blasted prairie fire, but my point holds. It was this wonderful -- some entries less so, but on average they were ace -- series of books that fostered my interest in role-playing games, although they weren't rpgs as such.

One day my friend Gareth showed me a new gamebook he'd bought, one that was a bit different to the others in that it was for multiple people to play at once. We sat in his dining room and took turns reading it and trying to make sense of it; we didn't grasp the need for a gamemaster so our fumbling attempt to lead Armstrong, Bigneck, and Crystal -- adventurers, not solicitors -- through a battle with some ORCS wasn't quite right but I still count it as the first time I played an rpg.

Is it nostalgia then that puts Fighting Fantasy at number nine in my list? In part, yes, but I think there's a lot to be said for the game itself, not least the simplicity of the system, which is more or less a straight port of that of the gamebooks without much in the way of modification for a multiplayer setting. This limitation becomes a problem in campaign play -- there are no rules for experience or healing between adventures because those weren't relevant concerns for the gamebooks -- but I'm not sure the original game was ever intended for such; the advanced version tries to remedy this flaw and expand the game into a "proper" rpg and is a brilliant failure, although the second edition is much more successful.

A Fighting Fantasy character has three statistics: SKILL, STAMINA, and LUCK. That's it. STAMINA is the character's health, as one would expect, and is reduced by damage and restored by scoffing food, a mechanic that is absurd but also endearing. SKILL is the character's active ability; if Bigneck wants to jump across a crevasse he rolls 2d6 and tries to get a result equal to or less than his SKILL score, and if he wants to hit an ORC he rolls 2d6, adds it to his SKILL, then compares that total with that of the ORC, who has done the same. LUCK is what it says on the tin; does the rope bridge break as Crystal crosses it? Roll 2d6 and compare to Crystal's LUCK to find out; where it differs from SKILL is that LUCK diminishes each time it's used, a beautiful little mechanical twist.

That -- aside from a PIXIE-sized handful of specific combat and situational mechanics -- is Fighting Fantasy in a nutshell. It's basic -- and oh, how I've come to appreciate simple rules -- and yes, it's also blunt, but it's more than good enough for an evening's gaming when there's nothing else to play, or for those rare and joyous occasions when one is introducing new people to role-playing games.

I'm going to be bold and say that Fighting Fantasy is the best introductory rpg there is. The rules are simple and make sense, and the book is full of good, jargon-free advice and even two complete adventures. When those are done there's The Riddling Reaver -- a campaign that's much better than I remembered -- and about sixty gamebooks from which to draw further inspiration. Second-hand copies of the book are abundant and cheap but even so this is one game that should always be in print. I don't play it often these days but that does not diminish my affection one smidgeon.

Next: buckets of dice, a machine gun, and a dragon.
Scrawled unintelligibly by thekelvingreen at 12:48 am