Scarface Was a Good One

Remakes are weird. Cover versions of songs are accepted and often applauded but in film -- a few exceptions aside -- the words "remake" or "reboot" are more often than not greeted with an all-consuming dread. Remakes seem to be far more uncommon in the literary world, beyond retellings of the classics, but I could be wrong about that because I am rubbish at reading.

Unless you count new editions of rulebooks, remakes don't seem to be that common in tabletop games either. Yes, there are umpteen versions of Keep on the Borderlands, the D&D people do love to rehash the big name classics every so often, and I have seen a few bloggers dissecting various adventures and offering suggestions for improvement -- one of my favourite things Zak S has done was when he condensed the aforementioned Keep into two one page dungeons -- but I can't think of many instances of an actual full remake of a role-playing adventure.

At this point, I expect the comments to be full of the many rpg remakes I have overlooked in my ignorance. It's okay, I am prepared. 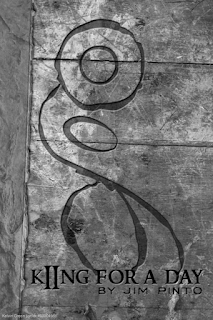 I considered it myself after I played the Pathfinder campaign adventure path Carrion Crown; it has a good central idea but the structure of the campaign adventure path ruins everything, so I thought it would be worth a rewrite. I put that project aside for boring mathematical reasons that aren't relevant right now because I want to look at King for a Day.

According to the notes by the author Jim Pinto, King for a Day started out as the AD&D2 campaign Night Below, but as he tinkered and tweaked the adventure ready for play, Pinto realised he was more or less rewriting the whole thing and decided to release it as a unique product.

I played Night Below once in 1998, I think. I remember playing a fighter with 10 or 11 in all his statistics and I remember our party getting ambushed by bandits as we crossed a river. I recall nothing else about the campaign, so perhaps that encounter ended in a TPK, or maybe we all decided it was naff and we'd play Shadowrun or Call of Cthulhu the next week. As such I can't make a full comparison between the original campaign and the remake, but from what I can tell -- see Charles' discussion of one element of Night Below here for an example -- King for a Day does feature more or less the same individual elements as the original campaign, arranged in a different order, with different connections between them and different consequences attached.

One notable difference is that King for a Day puts much more emphasis on events above ground; most of the book's 300ish pages consists of an exhaustive gazetteer of people, places, and plots in a remote rural valley, but the original campaign devoted only a third of its overall page count to its equivalent.

(This isn't a review as such, but the formatting of the gazetteer is strange because it's written as if it's a web page, with lots of hyperlinks; a location, for example, will have links -- complete with little icons -- to the people that can be found there and the plots that involve the place, but of course none of the hyperlinks work because, well, it's a book. The detail-obsessive part of me appreciates the structure of this even if in practical terms it is bonkers.) 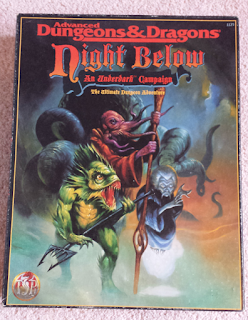 Once events draw the player-characters underground, King for a Day seems to be in a rush; there is a handful of locations -- albeit a couple of them are vast -- and then BOOM! there's the climax and it's done. Again, this isn't a review, but the underground bits do feel a bit underwritten, in particular the finale; I don't know what happens at the end of Night Below but I hope it's a bit more of a meaty finish.

The end result of all of this is that the remake seems broad but shallow; I don't mean this as a complaint, because it would be churlish and inaccurate to claim that the huge amount of content Pinto has generated for the main, above ground, part of the campaign is in any way superficial. Rather it's an observation on the structure of the adventure; it is more of a sprawling rural sandbox with a small but significant jaunt underground, and as such is more or less a total inversion of the original.

That's what I find most interesting about King for a Day. It is still recognisable as Night Below -- even to someone like me who has little knowledge of the original -- but at the same time it's quite different and you could play both and still be surprised. Reluctant as I am to encourage remakes, the success of King for a Day as a proof of concept makes me wonder what else is possible; maybe that Carrion Crown rewrite isn't such a bad idea after all.
Scrawled unintelligibly by thekelvingreen at 6:15 pm

Email ThisBlogThis!Share to TwitterShare to FacebookShare to Pinterest
Labels: games, King for a Day, Night Below, review