Sten Brodrington, ace driver who is a bit vague about which specific branch of British intelligence he worked for. He's looking for direction and purpose in life, or at least that's what he says.

Max Fischer, German investigator with a mysterious past. A little twitchy. He's hoping for some sort of redemption.

Carmel Shaked, Israeli break-and-enter specialist with a bit of a nationalistic streak. Carmel has had enough of secrets and lies.

Buoyed by the apparent success of the vampire destruction ritual, the team plans to do the same to the other Brides; the problem is that the spell requires samples of the target vampire's blood and handwriting, and some of the earth from the vampire's grave. They don't even have the name of the London vampire, let alone any of the necessary ritual components, and it's possible that she has been either captured or killed by EDOM, so it's decided to focus on the Romanian Bride, Natasa Dobra.

Before they do anything else they need to rest so they head to Carmel's sanctuary, a vineyard in Italy. The peaceful, familiar surroundings calm Carmel's troubled mind and everyone gets a chance to recover from their recent adventures.

During the week Carmel discovers that Red Line Corporate Solutions has been closed down as part of ongoing investigations into the team following its attack on the charity Heal the Children in London; Carmel arranges for some assets to be transferred to the Virgin Islands, but even so it looks like the team will have to rely on the funds stolen from EDOM for a while.

Carmel also discovers a message in one of her dead drop email accounts from her Mossad days; it seems to be from Hound, the EDOM operative the team met in Moscow, and it appears to be a request for a meeting.

The team is suspicious and a face to face meeting is rejected; instead, Carmel suggests a telephone call, and Hound agrees. They set up an elaborate -- and they hope, untraceable -- system involving bouncing the connection around the world and putting two physical telephones together, mouthpiece to earpiece, in a room in Shanghai, and they make the call.

It does not go well. The EDOM agent suggests that the team joins her organisation, gaining official sanction -- and funding! -- and as a result making the unwanted attention from Europe's law enforcement and intelligence agencies go away. A bullish Natasha acts as spokesperson for Red Line and alternates between outright rejection of Hound's offer and making implausible demands; the rest of the team follows the Russian's lead, with only Sten staying quiet.

In the end, all the two parties can agree on is an exchange of information; The Red Line team hands over half of the names from the Heal the Children's secret vampire list while Hound reveals the name of the London Bride -- Dominique -- and the location of Dracula. He is in Bucharest, claims Hound, but she is not confident of the team's chances in a direct assault.

A few days later the team sets off on a long drive to Bucharest; at the Romanian border the team is stopped by police who take a little too long to check Carmel's fake passport, but nothing comes of it and the journey continues.

In Bucharest, the team finds the local branch of Heal the Children, a small administrative office with only four staff, and puts it under observation for a few unproductive hours before Sten calls off the surveillance; there is a feeling that if Dracula is indeed in the capital, the team has little time to waste.

Carmel gets in touch with her local contact Dacien Comenescu, who expresses surprise that she is not deep in hiding given the hunt for her and her colleagues. Nonetheless he agrees to help Carmel -- an offer of €30,000 helps! -- and look for old Securitate files on Natasa Dobra, although he is not confident; most of the old documents were destroyed or hidden during the 1989 revolution, but it is possible that the Americans or Russians may have recovered something.

Upon Carmel's return from the meeting, the rest of the team informs her that they have located Dobra's elderly father living on the fourth floor of an old Communist era block of flats. The hope is that he may have a sample of Natasa's writing in an old birthday or Christmas card, or something similar. The team heads to the flats; Max keeps watch outside, Sten stays in the car, and Carmel and Natasha enter the building. The Russian kicks the door in and pushes the old man to the ground; she gags him and ties him up while Carmel searches the flat.

Downstairs, Max spots four burly men rush into the building and warns Carmel and Natasha, then he and Sten pursue but find that the men have already made quick progress up the stairs. Carmel climbs out on to the flat's balcony and hides just outside the window, while Natasha takes up position in the corridor, ready to shoot.

The men come into the corridor and Natasha opens fire, spraying them with bullets, but they keep coming. Two rush at the, er, Russian, while the other two enter the flat.

Natasha doesn't fancy a fight with bulletproof opponents and clips a rope to the window sill behind her, then backflips out the window. Carmel, it seems, forgot to bring her climbing gear and after a brief glimpse over the edge to gauge the drop, hunkers down and prepares for a fight.

One of the men leans out the window and opens fire on the dangling Natasha, giving her a serious injury; aware of her precarious position she swings backwards, drops a couple of metres, and smashes her way through the third floor window.

Max and Sten make it to the fourth floor and open fire on the two men at the other end of the corridor, peering down at Natasha's escape route. Once again the gunfire seems to have little effect, then one of the men vanishes and reappears right next to Max!

Inside the flat, Carmel lobs a grenade at the other two men and although they survive the blast -- Dobra Senior does not -- they do at least seem a little battered and ragged as a result. Before Carmel can celebrate her relative success, one of the pair disappears then reappears on the balcony.

Frenzied mêlée breaks out but for once the Red Line team seems to have the advantage. Tasers seem more effective than guns and soon the men are subdued; a furious Sten takes the opportunity to hack the head off one of them with his combat knife. 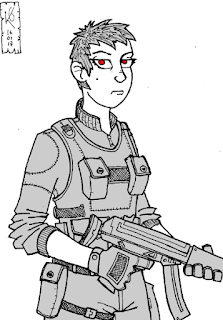 Alas, this has all come too late for Carmel, who is grabbed by her opponent and teleported away. She comes to her senses in the back of a van speeding through traffic and manages to alert her colleagues by radio before she is thumped into unconsciousness.

The others pile into their car and Sten tries to pursue the van but the other driver proves to know Bucharest's streets better than the Brit. Sten can only swear as he gets stuck in traffic and the van zooms out of sight.

Carmel wakes up in a concrete room, tied to a chair. Four guards in military gear stand watch and with them is Natasa Dobra. Dobra doesn't say a word over the next few minutes as she kicks Carmel around the room, stopping only when the Israeli is near death.

Then the vampire bares her fangs and drinks deep.

Next: Pumpin'!
Scrawled unintelligibly by thekelvingreen at 10:31 pm