State of the Onion

Oh dear, I've done it again. It's been a while.

It's perhaps time for an update on what I've been doing the past few months and what better occasion than the fifteenth anniversary of the blog? That first post is not exactly premium, top-quality content -- I'm not sure anything on here is, to be fair -- but still, fifteen years!

My life has seen many, many changes over that time. I was living in the US when I started the blog, in part as a way to keep busy and sane while I was unemployed.

As of January this year, I was unemployed again. Sort of. After ten years of working in post-sixteen education, I was made redundant because of restructuring and, although I was given opportunities to stay on in a different role, I decided it was time to move on. I took the not unreasonable redundancy payment and for the past six months I have been trying to set myself up as self-employed, drawing and writing for a living.

It's a little mad and scary, but it's something I've wanted to do since I was a teenager, it's something other people have told me I could and should do, and I would never have had the courage to try if I hadn't been kicked out of my job. In a way, the redundancy was a good thing. Probably.

How's it going? Well, my second book for Lamentation of the Flame Princess did well and I am working on the next one, a project which would be challenging enough without Zak Sabbathmith popping up on social media previewing his next LotFP book and making mine look like Baby's First D&D Adventure. Damn you, Zak. 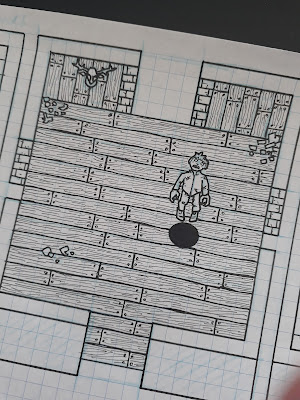 I've also got a few projects on the go for Mike Evans' DIY RPG Productions. I say "few" because Mike produces an insane amount of content and I lose track of where my stuff will turn up. The big project is the Forever Dungeon -- preview to the right -- which we both hope will be something new and exciting for virtual spelunkers. If all goes well it should be quite a swanky release, and I'll be able to buy a yacht pay the rent.

There's a small project on the go at Necrotic Gnome, and I have a few ideas of my own; what I've shown of Upon Deadly Sands has had a positive response so I'm going to see if that has legs, and I have what seems like a good idea for a D&D5 supplement, which will probably be finished just in time for D&D6.

I also have a couple of ideas for t-shirts and perhaps other bits of merchandise, but more on that when I've worked out the details.

On top of all that, I stumbled into a relationship, I now have a sort-of-stepdaughter, and we're all moving in together. I'll probably keep most of that side of things off the blog, but it's happening in the background so if -- when -- there's further blog disruption, that's probably why.

That's what's going on with me. I do have more time now and I suppose I have a brand -- eurgh -- to establish, so you should see more from the blog in future. Thanks for sticking around.
Scrawled unintelligibly by thekelvingreen at 11:53 am

Email ThisBlogThis!Share to TwitterShare to FacebookShare to Pinterest
Labels: Forever Dungeon, Lamentations of the Flame Princess, my so-called life, Upon Deadly Sands