Back From the Drawing Board

I spent some time over the last week thinking about defensive tactics in Blood Bowl and I think it paid off as I managed to scrape a draw in this week's league game! 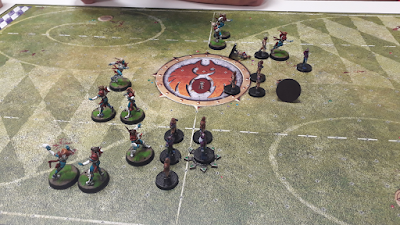 It wasn't the prettiest or most flamboyant game. Kick-off aside, I don't think I got the ball into my opponent's half of the pitch at any point. Instead it was a bit of a scrum along the centre line, with lots of pushing and shoving and plenty of lateral movement, but only the briefest attempts at breaking out of the central mêlée.

I think my opponent was too focussed on harming my thralls, either to pick up casualty points or to leave my vampires without backup, but that left him with no time to score. By the end of the match I had only four players left on the pitch -- through a combination of blocks, hungry vampires, and being sent off -- and he was a turn away from getting a touchdown, but he had run out of time. 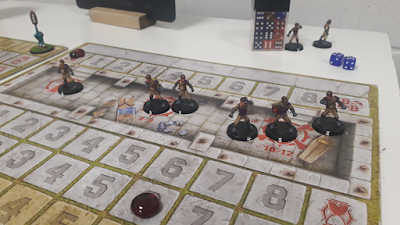 I suppose that in a sense his approach helped me, but I do think my defensive play worked to a certain extent. On the other hand, I didn't have much of a plan for scoring beyond some half-hearted positioning for a pass, so that's what I need to work out for my next game.