Last time, the elf Aelric Shadowstar, the dwarf Magnar, and the human rogue Rudiger Adler mooched around Averheim's dock district, looking for the plot. In doing so they uncovered gossip about subjects as diverse as a new crime boss, possible war in the north, and a hunchbacked mutant stalking the docks. They also beat up a teenage pickpocket and discovered the body of a murdered criminal; they decided to keep watch near the corpse in the hope that the killer would return, which would have been a good idea had they not spent the evening getting drunk. As a result they each closed their eyes -- just for a little bit, mind you -- only to wake up a few hours later, covered in morning dew, curled up next to a murder victim, and with a small crowd looking on.

This is why we love Warhammer Fantasy Roleplay. 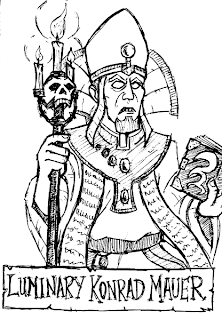 At some point Aelric remembered he had the use of an actual house, with proper doors and windows and everything, so the party stopped sleeping wherever they happened to collapse and after a night in relative luxury they returned to the docks to find that cheerful busker-cum-informant Ute had gone missing like so many before; they almost seemed upset by this but I couldn't tell if it was because they liked her or because they'd lost a resource. While looking into this latest disappearance the party stumbled upon another dead gangster, this time getting the CSI treatment from Light Wizard Konrad Mauer, who was being played by William Hartnell's Doctor Who.

After spending the past few days mixing with the lower classes, Aelric was quite pleased to meet Mauer who -- as both a wizard and a noble -- was almost as good as an elf. Mauer confirmed their suspicions that there was some sort of magic involved in the killings and also seemed quite taken with Adler's theory of a mutant scorpion man running around Averheim.

Soon after they met the bureaucrat Curd Weiss, who gave them a job; to discover the location of a goods wagon that had gone missing somewhere just outside the city. Off they went, bumping into a Strigany pedlar -- and I suspect, contemplating robbing him -- and just after lunch discovering wheel tracks leading off the road into a copse sheltered among some light hills. Suspecting that they had found the missing wagon, Adler and Magnar tried to sneak up for a better look. Magnar succeeded. Adler got three arrows in the face.

This is why we love Warhammer Fantasy Roleplay.

Aelric's horse got a stray arrow in the rump so it decided to go home with or without the dwarf and the human target. Upon returning to Averheim the party failed to convince Weiss to send an army after the bandit snipers but did somehow manage to command a higher fee for their services; perhaps Weiss felt sorry for Adler, sitting there with bandages wrapped around his head like a citizen of Nehekhara. He also gave them another job, to escort a noble to her country mansion as part of an elaborate plan to draw some bandits into a trap. 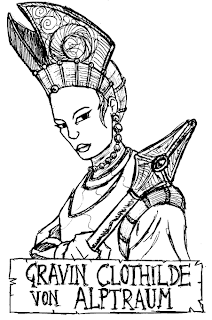 The next day the player-characters met Clothilde von Alptraum and accompanied her and her wizened bodyguard and coachman into the countryside. Of course they were ambushed and of course Adler got beaten up again, but in the end the bandits were vanquished by the adventurers. During the looting that followed Adler discovered that the criminals may have been members of the Averheim city guard. Dun-dun-dunnnn!

Now that we've got past the somewhat awkward introduction The Enemy Within II: Electric Booglaoo is flowing a bit better and the players are getting more involved, coming up with all sorts of theories about what's going on in Averheim and who might be behind it all. Adler's obsession with the Mutant Scorpion Man™ was a particular highlight, as was his unfortunate encounter with the first group of bandits; I have to admit to being a bit surprised at the players' retreat but that's perhaps a result of months of playing Pathfinder, where we tore through all opposition without blinking. WFRP is quite a different game and seeing Adler go into critical condition in the first couple of rounds of combat brought that home.

There's a lot of meeting-and-greeting in this new version of The Enemy Within -- again in stark contrast to Pathfinder -- but the players seem to be enjoying it and I'm keen to find out what they think of the many characters they've encountered; already Magnar is working with Konrad Mauer and Aelric is keen to forge links with everyone, as long as they are of the right class, of course.

Next time: some stuff happens and Adler probably gets shot again.
Scrawled unintelligibly by thekelvingreen at 10:57 pm