This session happened two weeks ago but I didn't think enough happened to merit a discrete post, so I was going to combine it with the next summary; as it turns out my waffling got a bit out of hand and the combined post was far too long, so here's that session from two weeks ago anyway.

Having stepped through the portal in Drakkenhall a somewhat dazed party appeared in a dark and damp cave. Behind them was a vast carving of a skull, its mouth wide open in a scream, or perhaps a Skeletor-like chortle; a few specks of magic sparkled in the mouth of the skull as the portal's energy dissipated. As the adventurers recovered from teleportation sickness they spotted a cloaked figure watching them from the opposite side of the cave. They pursued the figure and ran into his friends, a group of black dragonspawn, all of whom were slaughtered without mercy, for some reason. 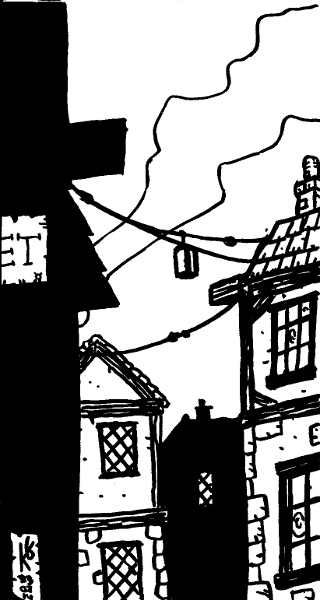 Emerging from the cave onto a wooded hill, the party looked down to see the lights of Shadow Port below. Sartheen the Red had been to the town many times before and it was on one of these occasions that the dragonspawn had seen an albino man with bright red hair carrying a pyramidic box to a temple; Sartheen's understanding was that the box contained the focus for the geas that bound the Blue -- one of the powerful dragon lords of the 13th Age -- to the service of the Empire.

The group scrambled down the hillside, sneaked into town, and soon got lost. Sartheen remembered that Shadow Port had some sort of mystical protection against raids by hostile powers and assured his fellows that his inability to find the old temple building was a result of this power, and not his poor memory or even worse perception rolls.

The group approached an old washer woman for directions and Jordan Young the bard-brawler-pirate offered her a gold piece for information. The woman explained that she had a husband to feed, so Jordan produced another coin. She also had children who were hungry, so Jordan flicked another gold piece her way, and another when she mentioned the starving dog she had taken in just the other day. Jordan started to get suspicious around the time the woman mentioned the peckish cousin of the dog's children, but in a rare moment of restraint for this group, they allowed the shrewd old woman to go on her way rather than eviscerate her and take back their money.

Amras took over negotiations as they collared a filthy street urchin and offered him one coin to take them to the temple and another if he'd wait for them outside. This proved to be a more effective approach as the blatant Victorian stereotype led them to an empty and overgrown square at the centre of which was a murky pool and a grey stone building spotted with moss and grime. 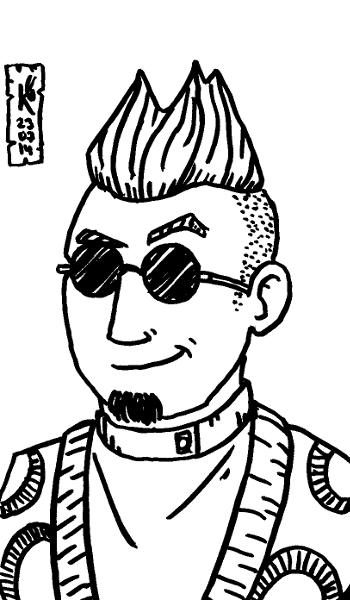 The great bronze doors of the building screeched like a krenshar in heat as they were pushed open -- stealth is not this party's strong point -- and inside the group encountered a trio of untrustworthy bandit types. It was no surprise that a fight broke out, but rather more surprising was Rarity -- the tiefling barbarian and the party's meat shield -- being blasted into unconsciousness by a wizard wearing those circular sunglasses that were all the rage in the 1990's, and most surprising of all was the beefy swordsman with whom Jordan was duelling rolling a triple critical, lopping off the bard's head, and sending it bouncing around the room.

Jordan had acquired an enchanted orcish helm that gave him a sort of second wind when suffering a fatal wound but we all agreed that it wouldn't work if it was worn on a head that wasn't attached to a body.

Mister Sunglasses rifled through Rarity's pockets and stole one of her magic items before vanishing with a smirk, while the rest of the party chopped his friends into bits. Victorious but battered, the adventurers mourned the passing of Jordan Young for about fifteen seconds before looting the temple. The upper floor of seemed to be some sort of store room for artefacts, and among the treasures Amras spotted a circlet emblazoned with the symbol of the Diabolist -- one of the bad guys and an Icon who had taken an interest in the elven mage in a previous adventure -- and so of course he picked it up and tried it on. The circlet vanished but the elf felt a boost to his magical abilities; also, a fiery third eye appeared in the centre of his forehead but he considered that to be a fair trade.

Meanwhile the rest of the party -- sans Jordan -- pocketed a few bits of jewellery and after a while found the object of their quest, the strange -- and not at all like the Lament Configuration, no way Jose -- wooden box Sartheen had seen on his prior visit to Shadow Port. The box was locked but after a bit of trial-and-error and pass-the-parcel the mechanism was bested and the lid flipped open, releasing a puff of toxic green gas into Sartheen's face. As the dragonspawn coughed and spluttered the rest of the party peered into the box, only to find that it was empty.
Scrawled unintelligibly by thekelvingreen at 9:19 pm