The party were in Shadow Port -- the 13th Age's generic hive of scum and villainy -- searching for a box that they believed to contain some sort of focus for the geas that kept the Blue -- the sorcerous dragon overlord -- on the side of civilisation and decency. After battling some ruffians -- and seeing Jordan Young beheaded -- they had found the box but they had found it empty.

They found this a bit puzzling. Ne-0n attempted to interface with the fabric of reality around him in order to glean some clues about the box but was soon assaulted by an overwhelming presence that threatened to drown his psyche. No closer to having an answer, the party decided to head back to the portal through which they'd been sent by the Blue; as they left the temple they spotted a gloopy shadowy thing following them at a short distance.

This shady -- ho ho -- fellow seemed to be some sort of scout and didn't put up much resistance when the group assaulted it. Moving on, they got lost again and this time noticed that the streets were reshaping around them and seemed to be herding them towards the centre of the town; Amras floated up to the rooftops to get a better look and was attacked as more of the dark blobby things pulled themselves from the shadows.

SHADOW THINGS NOT AT ALL LIKE THAT ONE FROM SPIRITED AWAY

6th level spoiler
Initiative + 11
Vulnerability: light (yes, I know there is no light damage type in 13th Age, so what?)

Inky black tentacle +10 vs PD - 18 negative energy damage.
Natural roll is above target's Constitution: the target loses a recovery as they feel their life force draining away.

The creatures proved to be a bit more effective in a group, until Amras dropped a fireball on them. One hundred points of damage will tend to discourage resistance from even the most tenacious of opponents.

After the battle the party was beckoned into a house by a portly fellow; they were of course suspicious but the alternative was a series of running battles with energy-draining shadows through streets that were always changing. A spot of tea and cake with a rotund stranger seemed like the lesser evil.

As the party ducked inside the man's cottage he introduced himself as Robul the Holy -- or Robul the Wet -- a priest of "the sea god"; Ne-0n spotted a small shrine in one corner of the living room devoted to a vaguely anthropoid deity with an octopus-like head and a mass of feelers for a face, and knew right away what kind of sea god Robul worshipped. This revelation didn't make anyone feel any safer.

The interior of the house was covered in all sorts of charms and symbols; Robul explained that these were intended to keep him hidden from agents of the Prince of Shadows. As the priest shared his dinner with the party -- glancing at Amras' burning third eye with considerable suspicion -- he explained that he had been sent by the Priestess to keep an eye on Shadow Port but that he also had a personal goal; to reconsecrate the temple from which the party had fled.

Robul told them that the town was alive -- 13th Age has living dungeons, so why not? -- and had taken a disliking to the party for some reason, and that while they would be safe under the protection of his charms, he wouldn't be able to help them escape. He did recognise the description of the albino man who Sartheen had seen carrying the pyramidic box; this was a wizard named Hallas, who was not associated with the Shadow Port thieves' guild but dwelled unmolested by both the guild and the living settlement in a ramshackle wooden tower towards the centre of the town.

After a night's rest under the many watchful eyes of Cthulhu the party decided to further investigate the box. Sartheen thought the best way to test if it was indeed the object of their quest was to smash it -- if it was the focus of a geas, the dragonspawn surmised, it would resist destruction -- but Ne-0n argued that tampering with a geas would be dangerous and Amras made up some guff that demonstrated that he hadn't paid any attention during geas lessons at wizard school.

The box was smashed to bits and nothing happened. Sartheen felt that the geas the Blue had placed on him was still active and so the party decided that they would visit the wizard Hallas, hoping he would know more, but were in no mood to venture out into the malevolent streets. Sartheen used his helm of communication to check in with Drakkenhall and request aid, asking first for a dragon -- a bold opening gambit -- but he was told by a black, assassiny-looking dragonspawn that there was a squad of assassins hiding out in the same cave that contained the portal through which the party travelled, and that they were ready to help.

Having realised that they had murdered their own extraction team the day before, the party decided to sneak towards Hallas' tower to see if the town reacted against them. They left Jordan Young's body with Robul for a proper burial, but Sartheen kept some of Jordan's toes, according to the custom of his tribe; he planned to have them with a honey mustard sauce when the party stopped for lunch. 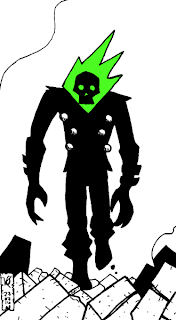 Shadow Port seemed to unaware of their exit from Robul's safehouse -- or its attention was elsewhere -- so the party made good progress towards Halls' home, but were interrupted as a fiery mass fell screaming from the sky, shattering a nearby building. As they picked themselves up the party watched a figure stride from the smoking crater. It seemed to be a suit of black armour topped by a black skull wreathed in bright green flame; the blazing skull turned to Ne-0n and cackled.

Amras tossed a spiky seed pellet he'd found in a previous adventure and thorny roots, er, rooted the skull-thing to the spot. It stopped cackling.

The party then blasted the creature to bits. The armour survived the onslaught, a sure sign that it was enchanted; it seemed to be a good fit for Ne-0n but when it was identified as being made of halfling skin, the robot sorcerer declined the opportunity to wear it. He did keep the garment though, because player-characters never turn down loot, even on moral grounds.

After the briefest of rests the party staggered at last to the base of Hallas' tower without any interference from the sentient settlement -- eat your heart out, Stan Lee! -- and rang the door bell. No answer came and so the player-characters spent a few minutes discussing whether to break in before realising that yes, they were player-characters in a Dungeons and Dragons variant so of course they were going to break into the wizard's tower.

The building was of unusual construction, in that all the rooms were stuffed into the top two floors and the five storeys below that were empty save for a rickety wooden staircase looping around the inside walls. The stairs were trapped, of course, and the party suspected as much and so were careful about checking for traps as they went. Although Rarity spotted the traps, their magical nature meant that Sartheen could not disarm them and so instead I asked the players to roll a single d20 each as they stepped over the glyphs; on a one, they would slip and set off the trap.

Stuart has appalling luck -- although I would challenge him in the next session -- and seems to roll at least three or four ones each session; these had been saved up for the stair climbing and so by the time the party reached the top, Sartheen the Red was more Sartheen the Crispy Fried. After passing through some living quarters the party reached the top floor of the tower and a wizard's study, complete with a wizard cooking up a fireball in each hand and demanding to know why they were in his house.
Scrawled unintelligibly by thekelvingreen at 5:24 pm

Email ThisBlogThis!Share to TwitterShare to FacebookShare to Pinterest
Labels: 13th Age, play report, rpgs, stuff that I drew, stuff you can use