As should be more than apparent by now I'm not a Dungeons and Dragons man. I didn't start with it and I didn't play much of it until recent years so the game doesn't have the same hold over me that it does other of my blogging peers; even so it is the original fantasy role-playing game and there is such a thing as the D&D style of play and that's something that even I have wanted to try now and then.

The problem is that I never found a version of D&D that I liked. I played a couple of fun sessions of AD&D2 and Red Box non-AD&D -- although by that time it came in a big black box -- but neither suited me, and in recent years I've played D&D4 and Pathfinder and have had even less success getting on with them. There was always something -- overcomplicated rules, counter-intuitive mechanics, optimisation metagames, THAC0 -- that got in the way and overwhelmed any desire I had to play D&D. Back when D&D was the only, er, game in town players made do or converted it to their  liking but I've lived and played through an era of great choice so the easier option was to give up and play something else.

I was fortunate that my interest in role-playing games was rekindled just as the old-school renaissance began and retroclones started to appear; I may not have the same nostalgic interest in D&D that the pioneers of those two related movements have but they produced and continue to produce a great deal of varied content that is not beholden to a single publisher's interests or vision. There are more versions of D&D around and in print than ever before and as such there's one for everyone.

I don't know if I've found my perfect version of D&D but thanks to the proliferation of clones and remixes there are two close contenders, one of which is Lamentations of the Flame Princess. 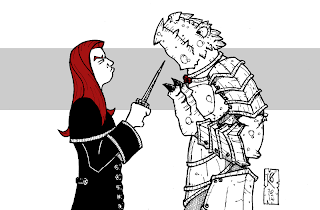 I have to confess a little bit of bias in that LotFP has paid my bills on occasion but part of the reason I've produced content for the game is because I like it a lot. It's a variant of [INSERT COLOUR HERE] Box D&D so it has the mechanical simplicity that I have grown to prefer over time, but because it was designed within the past few years it has also eliminated or modified many of the rules and assumptions of D&D that I find weird and archaic. I won't go into too much detail on the rules because you can read them for yourself for free but it is enough to say that they are almost perfect for what I want for an old-school approach to dungeoneering.

The other big draw is the setting implied by the rules. Where D&D has sort of hovered around a romanticised Middle Ages LotFP instead rolls the clock forward to something like the early modern period -- it could have been called Pirates and Puritans -- and is far from romanticised, presenting a game where magic is dangerous and untrustworthy, where elves are burned by holy water, wizards can end the world with a fluffed summoning spell, and mirror image is not the illusion one may expect but instead pulls alternate versions of the spellcaster from other realities for the sole purpose of dying in combat. It is a dark, strange, and nasty reflection of something almost twee in its familiarity and I love it for that.

There is one downside to that implied setting, and to the game as a whole, and it is that the experience system is more or less unchanged from that of Basic D&D -- go into holes in the ground, kill orcs, and take their stuff -- but the game itself seems to want to be Solomon Kane and I'm not sure the two approaches are compatible. It cannot be an insurmountable problem because enough people play LotFP as intended without any trouble but I always struggle with what I perceive to be a clash in tone. The author James Raggi has mentioned in the past that if he were to do another edition he would change the experience system so perhaps it's not just me, although such a change would distance the game even further from its forbears, and if the whole idea is to play a version of D&D that I like then that's a problem and I may as well just play RuneQuest.

Except I like LotFP more than I like RuneQuest. All that griping and philosophical hand wringing aside, I can put up with one small mechanical niggle if I don't think about it or if I compromise by using an abstract levelling system like that of Dragonlance: Fifth Age; it is not enough of a flaw that it tarnishes what is for me a sharp, efficient, and evocative interpretation of Dungeons and Dragons.

Next: to be this good takes Ages.
Scrawled unintelligibly by thekelvingreen at 12:28 am

Email ThisBlogThis!Share to TwitterShare to FacebookShare to Pinterest
Labels: Lamentations of the Flame Princess, lists, Pirates and Puritans, rpgs, stuff that I drew, top ten rpgs