(With thanks to +Andrew Scott for the pithy and punny title!)

Up to this point, the players had been cautious and had been noodling around, prodding at the mysteries of Saint Cerneuf, but avoiding bold moves, aside from the incident with the German soldiers. All that changed with this most recent session as they made the switch from cautious Call of Cthulhu investigators to ruthless military bastards. 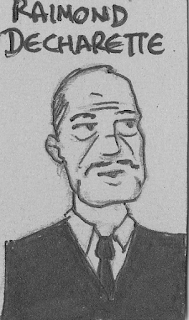 We had left the player-characters interviewing Raimond Decharette about his missing wife and her connection to a local cult, and with Pierre-Yves Bertrand having suspicions about whether Raimond was in fact Reni's father, as he claimed to be. The team put aside their questions about the Decharette family tree and instead asked the old man whether he had a copy of The Revelations of Saint Serenus in his library, as they were certain that the book would help them uncover the truth about what was going on in the village.

Raimond did not have a copy but explained that he once did, and it was now part of the Decharette collection at the village library, so that's where the Special Operations Executive agents went next, half-expecting the book to be gone. Not only was the book still present -- the adventure as written is a bit unclear on whether the copy exists, but I got tired of wrestling with inconsistent vagaries in the text and decided that it did -- but so too were the diagrams missing from the copy they had inspected in Cahors. Fergus O'Brien suspected that the spiral drawings were part of some cypher as the pages were thinner than those in the rest of the book and they seemed designed to be laid over text in order to derive another meaning; as the Revelations were written in Latin and it would take up to two weeks to translate, the agents were not able to confirm O'Brien's suspicion at that time.

Based on the note they had found and assumed to have been written by the missing Lionel Malo, the agents were convinced that the Decharette mansion sat atop a network of tunnels, and so decided to return the next day to investigate. A suspicious draught in the mansion's wine cellar seemed to confirm their belief and so they started chipping away at the wall while Pierre-Yves kept watch. He spotted young Reni Decharette ambling out of the mysterious wood and across the Devil's Field towards the mansion, stopping at one point to examine something on the ground; Mike McVeigh later investigated the spot and found a small stone statue of a satyr or fawn, an item that he pocketed for later study.

Tidelina intercepted the young woman and kept her attentions away from the activity in the cellar by playing cards with her in the mansion's kitchen and winning her over with pleasant small talk. Meanwhile the rest of the team broke through the thick cellar wall to discover that the tunnel opening they had uncovered was just about big enough for a small dog to scramble through and so would be far too tight a squeeze for the average cultist.

Disappointed, the agents decided to switch back to their military mission and in the evening visited the Martin farm to make contact with their partisan allies. There they discovered that most of the group was elsewhere, with only Helena Martin and Leon Ferrand present and engaged in an argument over the group's activities. They listened for a while before announcing their arrival, and Ferrand took the opportunity to excuse himself and return to the village; the SOE agents questioned Helena about Leon as they found his strong advocacy of direct action against the Germans worrying, and their concerns weren't allayed by her answers. 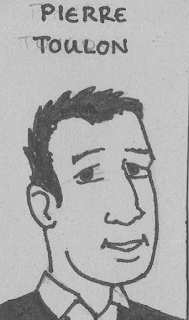 As the rest of the group returned home, McVeigh attempted to follow Ferrand but lost him as they got closer to the village; McVeigh -- himself was a former spy -- took this as evidence of special training, and not a lucky stealth roll on my part. McVeigh decided to report his wild speculation discovery to the rest of the group and upon his return to The Shunned House their lodgings he spotted someone watching the building from the shadows. McVeigh captured the observer, dragged him into the house, and discovered him to be Pierre Toulon, another of the partisans.

Pierre told the SOE agents that Ferrand had asked him to watch them and make sure they could be trusted. This aggravated their paranoia even further and so they tied the young man to a chair and roughed him up a bit in order to get answers; Toulon stuck to his story and had nothing but praise for Ferrand, a man he saw as a great patriot. Unsatisfied, the agents decided to get their answers straight from the source.

A few minutes later at Ferrand's modest house, O'Brien sneaked around to watch the back door while McVeigh and Bertrand positioned themselves at the front. McVeigh knocked once and, when no response was forthcoming, knocked a second and louder time. At this second knock, the door opened just enough for Bertrand and McVeigh to see Ferrand peering out, and they sprang into action, barging the door open and sending the partisan to the ground. O'Brien was supposed to be listening out for just such an event but wasn't paying attention and had to be summoned by the other two once they were inside and had subdued Ferrand without the Irishman's assistance.

What followed was a tense hour or so of role-playing as they tied the partisan to a chair -- a bit of a running theme -- and interrogated him about his loyalties and his true plans. He was calm despite the discouraging nature of his situation and even attempted to turn the questioning back on to them: they justified their treatment of him by appealing to their suspicions that he was a double agent, but could their harsh treatment of a supposed ally not be seen as evidence that in fact they were the double agents?

This went down about as well as could be expected and when Ferrand made it clear that they would get no answers from him, McVeigh's frustrations got the better of him and he attempted to strangle the partisan. 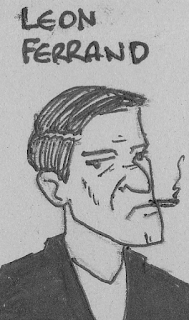 The violent outburst was interrupted by the sound of movement upstairs and a muffled voice calling for Leon; the agents had searched the house as soon as they had entered and had found no other occupants so this latest development didn't so much as put them on edge as push them well over. Creeping upstairs they saw a bulky shape at a window, and they rushed to engage the figure; it turned out to be Ferrand's drunk uncle, who had climbed in the window after finding both the front and back doors locked and bolted by the player-characters. For the crime of interrupting their interrogation they beat the old man into unconsciousness and tied him to a bed.

Upon their return to the ground floor, a hoarse Ferrand relented somewhat and admitted that he did indeed have special training as a member of the French secret service but that he was out of the country during the invasion and so, lacking orders and with no desire to conduct a one-man infiltration of occupied Paris, he headed instead for Saint Cerneuf du Bois to stay with his uncle and perhaps help the local resistance forces. He also claimed that if there was a double agent in the partisan group then the SOE team should be looking toward Giscard Bressan, who -- in Leon's opinion -- lacked commitment to the cause and had a mysterious connection to Jacques Martin that neither man seemed keen to discuss.

The player-characters -- and indeed the players -- were torn. Ferrand's story was plausible but at the same time they were certain that he wasn't telling the whole truth. If they were to trust him and he turned out to be rotten then he could scupper their operation, but on the other hand, if he wasn't a double-agent then silencing him would not only rob the SOE and the partisans of a useful asset, but the real double-agent -- again, if there was one! -- would still be free to work against them.

This was a great, tense sequence as the player-characters walked out of the room to confer before coming back in to ask Ferrand a few more questions, then walking out again, and so on. For much of this time I didn't have to do anything but sit back and listen as the players discussed and argued and made their cases to each other for either executing Ferrand or letting him go, and even though I wasn't involved in the debate it was thrilling to watch.

In the end, after much discussion, they decided that the risk was too great and as O'Brien looked away, McVeigh strangled Ferrand.

They untied the unconscious uncle and then took Ferrand's body away to be dumped in the river, just as they had with the young German soldier. Their emotions strained and their bodies exhausted, the agents returned to their lodgings to rest but McVeigh found that his sleep was kept at bay by vivid dreams of trees, savage people clad in furs, and a stone knife being plunged into his chest as the people danced and sang and an icy wind howled.
Scrawled unintelligibly by thekelvingreen at 9:54 pm