It's All Gone a Bit Pete Tong

At the end of the previous session, the agents of the Special Operations Executive discovered that the German troops occupying the French village of Saint Cenreuf du Bois were all gathered in the village's restaurant, preparing the place for a party. I pointed out that with the Germans all in town the Decharette copper mine would be under only light guard, a suggestion that the players took to be unsubtle railroading, but the irony was that all my preparation had been focussed in another direction; as it turned out the players got themselves into enough trouble without any nudging from me.

They stopped off at the Decharette mansion on their way and convinced Claude Decharette to give them a note allowing them to inspect the mine; this document got them past the guard at the gate, although he did seem a bit suspicious about all the tools -- the agents had concealed firearms in their tool bags -- the group had brought along. 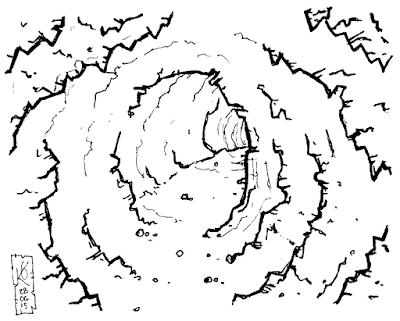 Using the sketched map they suspected had been left behind by the missing Lionel Malo -- the object of their secret mission -- they soon found a concealed passage from the upper level of the mine to a warren of natural tunnels that seemed to be in regular use. The team elected to avoid going anywhere near the Devil's Field or the mysterious wood nearby and so turned -- as far as they could tell without a dwarf in the party -- south, towards the village; their goal was to find an alternate entrance so they would not have to rely on the mine for future expeditions into the depths.

Some of the tunnels were too small for the bulky Mike McVeigh and that limited the team's explorations; one such place was a cave that they guessed was somewhere near the river, but since it was the first open area they had found since descending into the tunnels they decided that exploring it was worth the risk of splitting the party. Pierre-Yves Bertrand's small stature made him a good fit for the cockpit of a plane but also made him the best candidate to explore the cave; Fergus O'Brien crawled through on his hands and knees to support the French pilot while the rest of the team stayed in the tunnel.

The cave's muddy floor seemed to have been petrified or frozen somehow but no one had a sufficient Geology skill to understand whether that was unusual or what it could mean; on the plus side they did not need any points in Geology to spot the large and ominous hole in the centre of the cave floor. Bertrand looped a length of rope around his waist and made sure the rest of the team held on tight as he crawled over to the edge. Peering in he saw the darkness stretching out to an unknown depth; his lamp could not illuminate the bottom and he had no desire to throw anything down, for some reason.


Another passage led from the cave but the hole made the agents wary and the difficulty of getting into the cave in the first place put them off further exploration in that direction, so Bertrand returned to the tunnel from which he'd entered. Just as he got to the entrance a strange buzzing whine filled the air and everyone felt a great pressure from all around them; as the buzzing increased in intensity the bulbs in their lamps exploded, plunging the team into darkness, and the walls began to shake. O'Brien found that the matches he had brought -- while still dry -- would not light so he could not see part of the ceiling collapsing on Pierre-Yves, trapping the Frenchman's leg under rubble.

They did well not to panic. Dodgy scientist Kirby Tinkerton lost it a little as all his fancy academic knowledge failed to provide an explanation for what was happening, but the rest of the team kept as calm as could be expected given the circumstances. Bertrand managed to direct his colleagues to his location and together they dug him out, by which time the buzzing and shaking had passed; O'Brien tried again to provide light and this time his matches worked, so he was able to put together a basic torch.

Flickering light was better than none and the agents decided to press on and explore further. Before their torch expired they discovered a small cave in which there was a door that seemed to lead to the surface; a heavy chain on the other side prevented the agents from leaving the caves through the door, but McVeigh peeked through and saw what looked like apple trees. With their light running out, the agents returned to the mines and emerged looking somewhat battered and bruised. The guard to whom they had spoken on the way in was surprised at their condition and asked if he should make a report; grumpy and tired, they told him to do what he liked.

They knew that the Toulon family owned an orchard and so decided to head there in search of the cave exit, but found the front gates secured; leaving Tidelina to watch out for trouble, the rest of the agents scrambled over the wall. At first McVeigh wanted to sneak up to the Toulon house but suspecting that his comrades would scupper any attempt at stealth, he decided to walk up in the open; as expected he was spotted and Albert Toulon -- one of the partisans and uncle to Pierre -- came out of the house to confront him. 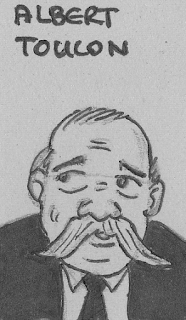 It turned out that the Toulons were not best pleased by the agents' treatment of young Pierre and would not have been happy to see them even if they weren't trespassing. McVeigh's attempts to justify the beating of Pierre as necessary for the war effort did not seem to convince the boy's uncle and he suggested that the agents leave; when McVeigh indicated that they would not do so, Albert went inside and slammed the door.

Bertrand, O'Brien, and Tinkerton sat down to watch the house while McVeigh searched the grounds for the cave entrance; he found it in a distant corner of the orchard, well hidden and far enough away from the house that it was possible that the Toulons could have no idea of its presence, but Bertrand was not convinced of their ignorance in the slightest and convinced the team to consider a direct assault on the house.

Their plans were interrupted as Tidelina spotted an approaching vehicle. A German Kübelwagen was coming up the road from the village, on its way to the mine perhaps, and so Tidelina whistled an alert; the Germans also seemed to hear the warning -- 02 on their Listen roll! -- and stopped, but by this time the Australian was well away so was unable to see what they were doing.

Everyone froze. A couple of minutes later the vehicle started up again and they heard it moving off into the distance so Bertrand sneaked up to the orchard gates for a better look; peeking under the gates he saw the distinctive jackboots of a German soldier pacing in the dirt and he reported this back to the rest of the team. With a soldier right outside the plan to break into the Toulon house by force was much less appealing so the agents decided to come back another day.

They decided to return to the Shunned House their rented accommodation via the Martin farm. There they told the Martins of the German patrol at the Toulon orchard and warned the partisans to be careful, and then things went a bit strange. McVeigh almost broke cover and told a wide-eyed Helena Martin about strange rural cults, monks living in caves underground, his suspicions that the Toulons were involved with such a cult, and that as such their loyalties did not lie with the partisan group.

It was quite clear to all that Helena thought that McVeigh was mad but she told him that she would think about what he had said and perhaps visit the Toulons to find out for herself what was going on; she also pointed out that if the Germans were indeed on their way then it would not look good if the agents were found clogging up her kitchen, and as this made a lot of sense, they left.

The agents split up, with Bertrand and O'Brien returning to their lodgings at the mansion and the rest of the team returning to the Shunned House their house in the village. There, McVeigh dreamed of himself and the rest of the agents dancing around a bonfire deep in the woods, but before he could experience more he was woken by a clattering sound on the roof of the house, like footsteps but also not. As he listened the clattering stopped and an odd piping started, increasing in volume and tempo as the piper on the roof played its strange song. Then the buzzing began.

Lights went out, windows cracked, and walls began to shake and the agents, fearing a repeat of the incident in the caves, chose to flee the house as the buzzing increased in volume. McVeigh and Tinkerton made it out first and spotted a hooved, faun-like figure on the roof, but Tidelina was slower on her feet and was just passing McVeigh's hidden weapons cache under the stairs as the buzzing set off the explosives inside.