Rad challenged me with this, and I've had nothing to post anyway, so this'll do. Not that I really understand these internet meme things, but...

Total volume of music files on my computer:
Oh blimey...

"My Music" is at 4.85gb at the moment, then I probably have at least another gigabyte of mids, mods and sids floating about in various virtual corners. Crikey.

The last CD I bought was:
The latest Lemon Jelly release. It's the same song done eleven or so times with different samples, and as such is a bit dull.

Song playing right now:
Nothing. But if I start up MusicMatch, it starts off with the newest Doctor Who theme, strangely.

Five songs I listen to a lot, or that mean a lot to me:
Dunno. I just put the thing on random and just listen while I'm doing something else. Plus, my tastes are far too geeky to share...

Here's the first five on my current playlist:
(Don't Fear) The Reaper - Blue Oyster Cult (it's probably not trendy to like this but who cares?)
Life's What You Make It - Talk Talk (this is the only one that "means" anything, but it's purely nostalgic, as this seemed to be everywhere when I was a nipper!)
Ecco 2: The Tides Of Time Drift OC ReMix - SuperGreenX
Space Station Interior - Metroid Prime Soundtrack
Knives Out (Live) - Radiohead (this is a bit naff actually, not a very good performance by the gang)

In a strange bit of synchronicity with Rad, the player does seem to "randomly" play To The End by Blur an awful lot, and it is a rather cracking tune.

Five people to whom I'm passing the musical baton:
No one comes here, so I don't know.
Scrawled unintelligibly by thekelvingreen at 9:40 pm No comments:

You know those joke items you can attach to your car? Like the fingers you put around the edge of your boot to make it look like someone's trapped in there, or the golfball you stick to your window so it looks like it's been smashed? Is there a similar thing that looks like a bird has been smooshed into your front grate, or did the car I just saw really have a dead bird stuffed in its radiator?
Scrawled unintelligibly by thekelvingreen at 11:11 pm No comments:

"Nintendo surprised many by unveiling a new version of its best- selling GameBoy, called the GameBoy Micro, due to go on sale in the autumn.
The tiny game player is just slightly bigger than an iPod Mini, but two-thirds the weight." 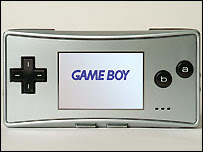 Good to see that Nintendo are going for the hitherto-ignored market of video games for really tiny people...

The new X-Brick is even uglier than its predecessor, and has the wrong name (wouldn't "Next-Box" have been much better than the surreal "X-Box360"?), and I'm undecided about the look of Sony's new machine, but it promises to be backwards compatible with both previous incarnations of the hardware, and that's enough to sell me on it.
Scrawled unintelligibly by thekelvingreen at 6:06 am No comments:

Enterprise got an absolutely wonderful series finale tonight, a poignant episode that really got to the heart of what the show was about. Excellent stuff.

Except it wasn't the real season finale, because that was the episode they tacked on afterwards, which sidelined the regular cast in favour of guest appearances by some of the Next Generation cast members. It says volumes that the best bit of the entire episode was the Picard voiceover clipped from the Next Generation opening titles. Tsk.

I think that one of the reasons why Star Trek has the reputation it does is because for every absolutely stonking episode, you get three or four terrible stinkers. Conceptually, it's never been a bad idea (even the abysmal Voyager had a great premise), but the execution is so embarrassingly erratic.

So it's farewell to Enterprise, a programme that didn't start off too well, but delivered two quite strong final seasons that were among the best the franchise has ever produced.
Scrawled unintelligibly by thekelvingreen at 5:45 am No comments:

So you've got eleven million quid in paintings you want to offload, and both Christie's and Sotheby's want the job of selling them. How do you decide which prestigious auction house to choose?
Scrawled unintelligibly by thekelvingreen at 6:18 am No comments:

DC Comics, the home of Superman, Batman and Wonder Woman, has acquired a new logo, for the first time in thirty years.

Sadly, rather than saying "exciting superhero stories within", it really says something more like "24-hour cavity protection" or "keeps clothes clean and colours bright":

Do not attempt. Again.

So there's this advert for some generic car in which it's being driven along some country road somewhere. It's not being driven particularly fast, and there are no obstacles in the way or flashy stunts being attempted.

And yet, there it is, at the bottom of the screen:

"Professional driver. Do not attempt."

Do not attempt what? To drive your car along a road? What would be the point of buying the sodding thing then?

Speaking of which, the election went pretty much as I'd expected, with Labour taking a pretty big hit over Iraq. I hope that this warning shot will wake Labour's leadership up a bit to just how much they're letting people down. Brown and Blair do seem to at least acknowledge the fact that some of their recent policies haven't been too popular, which is progress of a sort from Blair's creepy and arrogant attitude of the past year or so. Great fun was had following the events on US telly, too, especially the many and varied attempts made by the news programmes to explain some of the alien (to Americans) concepts involved. Three parties? How does that work then?
Scrawled unintelligibly by thekelvingreen at 5:29 am No comments:

Gah! For the past couple of weeks, I've been struggling with drawing a strip for Sunny For Girls #2. It's been a right pain in the arse, but I got there in the end, and it doesn't look too bad either. I've also learned a few new tricks that I can apply to other work, such as the still-unfinished O Men Anthology piece, so all in all, while it's been a hassle, it's been worth it.

I can't rest though, as there's an ever-increasing list of projects to deal with!
Scrawled unintelligibly by thekelvingreen at 12:21 am No comments: