A Kick-Ass Review in Two Parts, Part the First

Mark Millar doesn't do subtlety. It's one of his recurring problems, which is why he's better on big silly stuff like that brilliant twelve-part Wolverine story he did with John Romita Jr. So you'd think that something with a name like Kick-Ass would be right up his alley; however, like his Civil War, here he attempts to merge the big stupid stuff with proper writing like what grown-ups do, and ends up with a confused mess. This isn't about the film; I'm seeing that tomorrow, but the reviews have been positive enough that I thought about having another look at the source material. I'd avoided it the first time around because Millar's writing was becoming less and less to my tastes, too predictable and reliant on shock moments; there's a definite rhythm to his work, with every issue ending on a full-page splash, and everything else relegated to connecting matter, just bubbling along from one dramatic moment to another (I can't call them cliffhangers, because there's no tension; they're more like a musical crescendo, except without the quality implied in using foreign words). At least with the Accursed Bendis, you can't predict where the splash pages are going to be, so they often do come as a surprise change of pace from the endless pages of meaningless dialogue, but with Millar, it's like clockwork. I don't recall it being quite so bad on The Authority, so the habit must have developed sometime during his run on The Ultimates. Anyway, that's all present and correct in Kick-Ass, 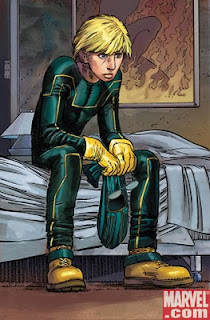 so structurally, it's as poor as most of his recent work, but it's the failings elsewhere which make me wonder why this series is so venerated. Is it really the ultraviolence and swearing which turns on the fans? If so, then perhaps Millar is making a far better point with this comic than I give him credit for; there's nothing here that you haven't seen in umpteen other superhero comics, but the addition of heaps of gore and swearing, and the occasional breast, have made this somehow more special. I suppose that there's a possibility that this is the point of the story, and that Millar is pre-emptively poking fun at the very fans who would gravitate towards the comic for those reasons, an extension perhaps of that infamous last page of Wanted. Given Millar's usual blundering approach to the fine art of making a point, however, I doubt it. When Marvel announced their MAX imprint, there was much speculation about whether we'd just see superhero comics full of gratuitous violence, swearing and nudity, and we did see a bit of that, but not as much as expected. That is what we get in Kick-Ass, alas; I'm no prude, but the key difference is that MAX had people like Garth Ennis, who can do gratuitous, but is a good enough writer to also give everything some kind of meaning. Ennis can do this in his sleep; think of how messy, profane and violent Preacher was, and how we laughed at Arseface, or Starr getting his bits chewed off by a dog, but then remember how satisfying the plot was, and how touching the relationships were. The closest Millar gets to that is in the relationship between the protagonist and his father, but there's too little of it to make much impact. There's also a scene in the middle somewhere, concerning a house fire, where Millar almost touches on a bit of significant character development for the Red Mist supporting character, and then squanders it completely. (This reminds me that I need to get out my Preacher books and reread the lot. In fact, everyone should read them. Not my copies. Get your own.) I expected such weakness from Millar, but what properly disappointed me was the absence of the much-vaunted realism. One of the selling points was that this was a superhero comic without superheroes, that it was about a normal guy dressing up in a costume and trying to fight real crime, with real consequences, and there is potential in that idea. There is some of that in the first couple of chapters, but then we get the silly Hollywood gangsters, and the whole thing gets torpedoed when deadly little Miho Hit-Girl turns up, all ninja swords and precise-to-the-nearest-molecule decapitations. If you're going to throw in a fantasy element, why not just go the whole hog and give her superpowers? Again, it's a sign of Millar's lack of discipline as a writer, an inability to step back and see if what he's created actually works. This is, of course, what editors are for, but Marvel's editors have been somewhat lax for years now. Oddly enough, the ending doesn't rankle in the same way; it's the same idea of the self-fulfilling prophecy we saw in Unbreakable (still Shyamalan's only good film, and a good example of how to make the "mundande superhero" concept work), and it makes much more sense than Hit-Girl. John Romita Junior is about the only redeeming feature of the book, again turning in excellent artwork. One could argue that given the "realistic" concept, a more photo-referenced art style may have been a better choice, but there's always been something very "normal" about the way Romita draws the world, a visual consistency which gives the whole thing a verisimilitude which an artist like Alex Ross or (argh) Greg Land would struggle in vain to produce. So I'm pleased for him that the project has been such a success, as it seems to have translated to the kind of high-profile jobs over at Marvel proper which he should have been doing all along (he's the artist on the upcoming Avengers title, which is written by the Accursed Bendis, so I'll be giving it a miss, but I was this close). Anyway, so there you go. Kick-Ass doesn't. As I mentioned above, the film has been getting decent reviews, so we'll see how it compares.
Scrawled unintelligibly by thekelvingreen at 8:03 pm 1 comment:

The head of Ireland's Catholics has apologised for his role in mishandling the case of a serial child abuser.

A Catholic adoption society has won a High Court battle over laws forcing it to consider gay couples as parents.

Yeah, because they clearly are the right people to decide who can look after kids.
Scrawled unintelligibly by thekelvingreen at 6:14 pm 2 comments:

Email ThisBlogThis!Share to TwitterShare to FacebookShare to Pinterest
Labels: cretins

Love Song for a Time Lord

Sod Lady Gaga ripping off Tarantino and Japanese TV, this is better:

Email ThisBlogThis!Share to TwitterShare to FacebookShare to Pinterest
Labels: Doctor Who, music

The BBC has been under fire of late, with the most recent example being the planned cutbacks to their internet services, along with the axing of Asian Network and 6 Music.

It's easy to moan about the BBC, about the licence fee, or about how output seems to be getting cheaper and more superficial, but I think we take the Beeb for granted. Spend some time in the US, for example, and you'll find you miss the public service output of the BBC. You'll miss the approach to news. And yes, you'll miss the lack of adverts, but what you'll also notice is the lack of corporate interference, and the subsequent honesty, in programming.

It's not perfect. There's a lot of shite on the BBC, but it's mainly the light entertainment stuff, and light entertainment is always rubbish. But then I watch things like last night's brilliant, intelligent and honest Wonders of the Solar System, and I become deathly afraid of what the predatory Rupert Murdoch, and his puppets in the incoming Tory government, have planned for this great, and it is great, institution.
Scrawled unintelligibly by thekelvingreen at 9:22 pm 2 comments:

Unless otherwise noted, these are all in pretty good condition, having only been read once or twice. I'm mainly interested in getting rid of them, so if you want to pay, you can, but I do ask for you to cover postage at least, which may be expensive if you want lots of them and live in a far away land.
Scrawled unintelligibly by thekelvingreen at 5:15 pm 3 comments: