Here in Blighty, our public monuments tend to be statues of dead white guys. In Japan, as always, things are different: 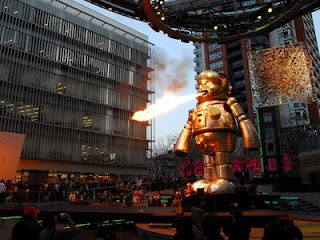 So Terminator 2 has that Guns 'n' Roses soundtrack. It also has that scene in the shopping centre corridor, all slow-motion, where we finally discover which of the Terminators is the good one, as Arnie pulls a gun from a box of roses.

You've all probably known this since 1991, but I've seen that film a hundred times and never noticed it before.
Scrawled unintelligibly by thekelvingreen at 11:18 pm 1 comment:

Email ThisBlogThis!Share to TwitterShare to FacebookShare to Pinterest
Labels: Terminator 2

The only thing I liked about Cloverfield was the credits music, so it was nice to hear it again. For two hours. Apparently, Trek is the future of Alias. He's not Shatner, but he'll do. Murdering a bunch of helpless men is not a heroic finale. It was much better than I thought it would be.
Scrawled unintelligibly by thekelvingreen at 11:35 pm No comments:

Peter Bradshaw, film critic for The Guardian, who hates everything unless it's a European black and white four-hour epic about economics and sexuality, really likes the new Star Trek. I'm not sure what's going on.
Scrawled unintelligibly by thekelvingreen at 8:05 am 2 comments:

The idea is simple and largely self-explanatory. The publishers put out some free stuff, which the local comic shops distribute in their community, with the end goal that some of the punters who pick up those free books will come back later and buy stuff. Now, as with many aspects of this shrivelled medium, the big US publishers tend to try to ruin the whole noble endeavour by shovelling out some awful pap, somehow not realising that a crappy comic isn't going to bring anyone back for more, but in theory Free Comic Book Day is a good thing.

When I lived in Norwich, the excellent Abstract Sprocket comic shop put on a proper event for (I think the first) FCBD, hiring some space in the shiny new city library and inviting comics writers and artists to come in and chat with fans, do signings, and so on. Impressive stuff, but the important thing is that the Sprocketeers realised that for the event to be a success, it had to be visible; all the free comics in the world aren't going to do much if no one goes to comic shops in the first place. You have to get punters into your shop, or you have to go to them.

On a whim, I checked to see if there were any events going on in my neighbourhood, and the FCBD site showed that my local shop was taking part. I headed down to find that the street was blocked off for most of the day by the annual Brighton Festival Children's Parade, so I went and sat on the beach for a few hours. Returning later, I had a good look around the comic shop, and saw no signs indicating any FCBD events, so thinking that the website had been in error, I left. On my way out, I passed by the counter and just happened to catch a glance of the wall behind the shop assistant, on which were mounted a couple of shelves containing a handful of FCBD titles, a tiny bit of cardboard with "Free Comic Book Day" scrawled on it in black felt tip, and under that another bit of card with "Only Two Free Comics Per Customer" written in a jagged and unfriendly hand.

The timing of the parade was just bad luck, but the shop screwed everything else up. They didn't advertise the event at all, not even with a poster in the front window (although there was a poster advertising a Kevin O'Neill signing on the 17th), access to the free comics was restricted, so you couldn't get a look at them, and you had to buy something before they gave you a free comic, which is about as backwards as it can get, and not exactly friendly towards the allegedly all-important new readers.

What a waste.
Scrawled unintelligibly by thekelvingreen at 11:44 pm No comments: