It's official: I have no idea what Games Workshop is playing at.

It's produced a version of Warhammer Fantasy Battle that looks like it's fun to play. It's bringing Blood Bowl back. It's brought genestealer cults back, so now I'm about 75% less sad about my dad throwing out my old cult.

Today brings the news that Warhammer Quest is coming back.

There's been a recent change of management over at GW and the new bosses seem to have a fondness for, well, games. At this stage, I wouldn't be at all surprised if we see a new edition of Oi! Dat's My Leg! before the end of 2016.
Scrawled unintelligibly by thekelvingreen at 9:16 pm 3 comments:

First things first, I should mention that one of my friends was involved in the production of this game -- and voices a pompous sea bird -- and I've spent an afternoon playing Bomberman with both the creator of the game and Nelly Cootalot herself, or at least her inspiration and voice actor. Nelly Cootalot: The Fowl Fleet is a comedic point and click adventure game about pirates. If you are now thinking "Gosh, that's a bit like deciding to be a sprinter and challenging Usain Bolt to a race your first time out" then that's a bit weird that we both thought of that, but you'd be correct. The shadow of Monkey Island looms large over this game -- now I'm imagining a Lovecraft pastiche; The Shadow Over Monkey Island -- but not only does the script acknowledge the influence, Nelly Cootalot is strong enough to stand up to and apart from its illustrious predecessor.

The writing for the most part is strong, and the characters' personalties come across well, helped in no small part by good voice acting throughout. Nelly herself is a charming protagonist; everyone seems to like her, and her cheerful approach to adventure is infectious. The main villains are a bit sketchy, and not in the appropriate sense of the word; I think they return from the original game in the series, but as I've not played that, their motivations and personalities seem a bit vague in this instalment. A new villain introduced in the middle section of the game comes across far better, although again his motivations and connection to the main plot are somewhat unclear. Still, it's Nelly and her friends who are most important and they are well-written and acted; aside from Nelly herself, I was most impressed by her sidekick Sebastian, voiced by Tom "Warhammer 40,000: Fire Warrior" Baker. To be honest, I was expecting someone of Sir Tom's prestige to sleepwalk through his role but he brings a lot of personality to Sebastian, even though he has one of those voices that means you can never quite forget the actor behind the character. 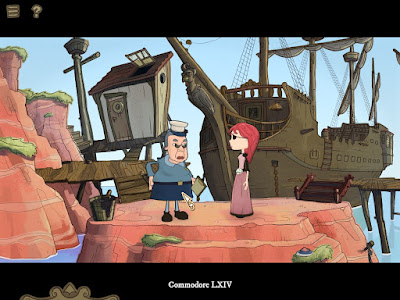 The game is funny, and there's a varied approach to the jokes, with plenty of references to films and games, a bit of witty wordplay, a dash of satire here and there, and at least one bit of smutty innuendo, although that last one doesn't land as well as it could have due to some clumsy back-pedalling. Some comments and reviews have claimed that the game is for children -- perhaps because of the art style -- but the latter joke suggests not, and some of the references are going to go right over the heads of most kids, unless they are showing Jack Nicholson films in primary schools these days.

The game looks good too. The trailers did look a bit ropey, with a flat animation style reminiscent of Flash or a cheap CBeebies programme, but the game looks much better in action. The character models look to be cel-shaded and that gives them a bit more weight, and they are for the most part well-animated; it is a bit of a shame that they don't tend to do anything when Nelly isn't interacting with them, but one has to remember that this isn't a multi-million pound game with a hundred-strong creative team behind it. That said, it's a pleasant surprise when you spot a character making a small movement or gesture that must have added time to the production schedule and is irrelevant to wider game, but helps to bring the character to life. It shows a dedication and craftsmanship that you don't often see in the aforementioned larger productions.

I did encounter a couple of graphical glitches; during one part of the Guttering Howls section Nelly walks in front of and through something she should be behind, and in the penultimate chapter the inventory panel goes a bit wonky, but is still usable. I also had a bit of trouble with the game's interface being slow to register what was under the pointer, although the mechanics worked as expected, so it wasn't a major issue. I played the game on Linux Mint 17.3 and I don't know if these glitches are in every port. 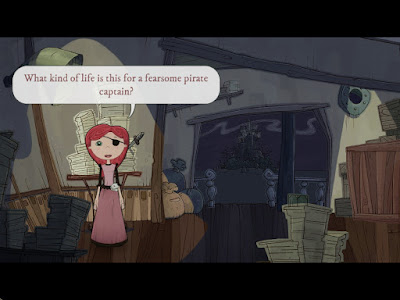 Nelly Cootalot's puzzles are varied and often require different approaches and techniques to solve; even when they are of the give-item-A-to-person-B sort, they are at least presented in novel ways so the game never gets dull. In terms of difficulty, the puzzles are if not simple, then logical, so you are never hunting for rogue pixels or throwing every item at every character, hoping for the best.

That said if there is a flaw in Nelly Cootalot -- and to be fair, it is the only thing I would consider a proper flaw -- it's the wider logic surrounding the puzzles. On a few occasions I worked out the solution to a problem, and had all the correct items in my inventory ready to go, but I couldn't apply said solution because I hadn't gone to talk to someone -- often in another location -- who was supposed to give me the idea I'd already had. This led to frustration and -- in one case near the end of the game -- a suspicion that there was a game-breaking bug. On the plus side, Sebastian is able to give hints about what to do next, and in at least one case this helped resolve the impasse, although in the latter instance I did end up roaming around clicking on everything and everyone until I spoke to the right person.

Creator Alasdair Beckett-King is a jolly nice fellow -- and is not bad at Bomberman -- but it turns out he's quite good at making computer games too. I had great fun playing Nelly Cootalot: The Fowl Fleet and although it is short -- it can be completed in about five hours or so, although getting the Steam achievements will take longer -- I think it is worth the £12 I paid for it. There are rough edges, and places where I feel Alasdair and his team could have done a tiny bit more, but what's here is good, and I hope the game is enough of a success that we see more from him.

If you like point and click adventure games, give this a try, because you'll probably like it. If you don't, give it a try anyway, as it's charming and funny and may change your mind.

Nelly Cootalot: The Fowl Fleet is available from loads of places, right now!
Scrawled unintelligibly by thekelvingreen at 4:05 pm No comments: 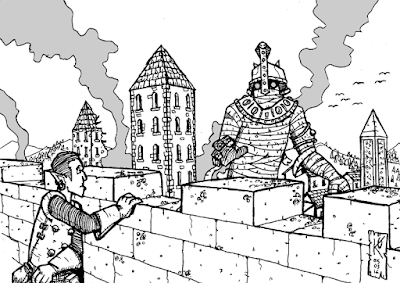