Look, I'm no supporter of Gordon Brown, but if someone's whinging about "students" and "immigrants" ruining Britain, then guess what? Perhaps that person is indeed a bigot. That's not to excuse Brown, but let's not all act like he went mental and started insulting her for no reason.
Scrawled unintelligibly by thekelvingreen at 6:54 pm 2 comments:

First of all, it either shows or encourages a wilful ignorance of our electoral system. I can't be certain that the people who run ITV and Sky know how it works, but I'd have thought that the broadcaster with its own dedicated Parliament channel might be able to figure it out. A debate between the party leaders is all well and good, but the thing is, I'm not a constituent of Kirkcaldy and Cowdenbeath, Witney, or Sheffield Hallam, so I'm not voting for any of these men, even if I wanted to. It's about policy, not personality; this isn't America.

(And what the heck is Sky doing showing one of these debates anyway, when they don't have nationwide coverage?)

The greater idiocy in all of this, perhaps, is the perpetuation of this nonsense about these debates being the first of their kind, as if there hasn't been at least one a week televised since at least 2000.

If the British people do not understand the electoral process, and it appears as if this is the case, then it's up to the public service broadcasters to educate them, not perpetuate the ignorance. Otherwise, this will be America.
Scrawled unintelligibly by thekelvingreen at 7:09 pm 6 comments:

Another Reason to Hate Microsoft

What Kind of Hole?

I seriously doubt I'll vote for Labour this time around, but I have to give Gordon Brown credit for his response to David Cameron unveiling the Tory manifesto:

Prime Minister Gordon Brown said there was a "complete hole" in the Conservatives' plans.

When the BBC announced that there was going to be a new series of Doctor Who games, I was a bit concerned, as I'm worried that they're spreading the franchise too thin as it is, but also because of this:

From reading this article, it seems as if the games are in safe hands. Not only is Steven Moffat involved, but he also seems to understand the video game medium. Even better is the news that the games are being developed by the creator of the brilliant Beneath a Steel Sky. If the new games are half as good as that old classic, then we might be in store for one of the first decent TV/film-to-game adaptations.
Scrawled unintelligibly by thekelvingreen at 8:39 pm No comments:

Email ThisBlogThis!Share to TwitterShare to FacebookShare to Pinterest
Labels: Dalek Attack, Doctor Who

They Still Cancelled It, Though...

Marvel "proudly" congratulates the creative team of the cancelled Captain Britain and MI: 13, which has nothing to do with the comic receiving a Hugo Award nomination, despite Marvel's best attempts to kill it, no, not at all.

Still, the company is putting two issues of the title up for free online, at the above link, so that's something. Even if the Marvel digital comics interface is horrible and unworkable.
Scrawled unintelligibly by thekelvingreen at 12:17 am No comments: Email ThisBlogThis!Share to TwitterShare to FacebookShare to Pinterest
Labels: B/X, self promotion, stuff that I drew

A Kick-Ass Review in Two Parts, Part the Second

Well, it's not a slavish imitation of the book, that's for sure. On the whole, Kick-Ass the movie is less bitter and nihilistic than its parent, and as such, loses some of the dark humour of the original, such as the sad revelation of Big Daddy's true origin. There is still a distinct irreverent edge to the film's approach to superheroics, but on the whole it is a much more traditional type of superhero story than its inspiration. The minor but jarring fantastical elements of the Millar/Romita comic are exaggerated in the film, and many of the genre tropes Millar is explicit in rejecting are brought back into the fold here (although to elaborate would be spoiling things a bit), all of which distance it even further from that original what-if-superheroes-were-real concept, but in the end make for a more successful, if conventional, story than Millar's between-two-stools approach. Millar's pacing problems are ironed out by screenwriter Jane Goldman, but she introduces some new ones of her own, completely scuppering the revelation of Red Mist's true identity for no apparent reason at all, and introducing Big Daddy and Hit-Girl far too early on, which only adds to the general impression that it's their film, and sidelining Kick-Ass somewhat. The changes to the house fire scene also have a knock-on effect, taking a significant moment of true heroism away from Kick-Ass so that when he later makes that crucial decision to be a real hero, despite his limitations, it seems to come as a result of the influence of the father-daughter team, rather than something from within himself. On the other hand, the Big-Daddy/Hit-Girl relationship perhaps deserves to steal the limelight 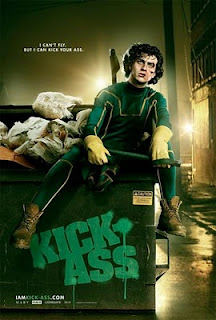 , as the pair are developed further than in the comics, and benefit from fine performances from the two actors. Everyone's talking about Chloe Moretz as deadly little Miho Hit-Girl, but for me it is Nicolas Cage who impresses, delivering his strongest performance in years, and showing that he is at his best when playing someone who's a few slates short of a picnic. His exaggerated Adam West impersonation is joyful, although it is a shame that they sanded off most of the nutty Republican edge of the character (Big Daddy, not Adam West). It is also disappointing that similar attention was not paid to the relationship between Kick-Ass and his father, squandering one of the only bits of character development in Millar's original work, and further flattening the protagonist, making him seem less compelling than the supporting characters. The film is packed with great action sequences, particularly towards the end, although the early fight between Kick-Ass and the guys-who-aren't-Puerto-Rican (because you can have a little girl say rude words, and you can show all sorts of gore and violence in close detail, but woe betide you mention the nationality of some muggers, or portray Republicans in a bad light...cripes) doesn't work quite as well as it does in the comics, with less of a sense of the protagonist actually pulling off a victory, something which is important to show at that stage in the narrative. There's a very effective strobe-lit combat sequence later on in the film, and director Matthew Vaughn clearly has a better idea of when to use techniques like slow-motion than certain of his peers; the fights in Kick-Ass are head-and-shoulders above those of Watchmen, while often achieving the savage beauty for which that latter film strained. The soundtrack is strong too, a good mix of songs and score which complements the action, and never seems bolted on in order to sell an album. All in all, Kick-Ass is loud and silly and stupid in places, and makes some unfortunate errors here and there, but on the whole improves on the source material by throwing away its pretensions of realism and going just a little bit nuts. It's more Kill Bill than Unbreakable, is not quite as good as either, but still great fun. I would give Kick-Ass a Moviewatch eight out of ten! (The film also gets points for referencing Scott Pilgrim, because Scott Pilgrim is ace.)
Scrawled unintelligibly by thekelvingreen at 8:41 pm 2 comments: