With a Little Bit of SKILL/STAMINA/LUCK, We Can Make It Through the Night

This is a review of the new edition of Melsonian Arts Council's Troika! but first, a bit of a digression. It will be relevant, I promise.

Fighting Fantasy is one of my favourite role-playing games, but it is not without its problems. It was designed to run the Fighting Fantasy solo gamebooks and while it's just about fit for purpose for those, the ruleset struggles when taken out of that context. 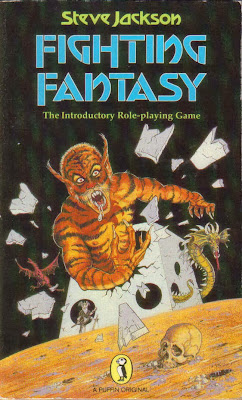 In the gamebooks there is some freedom of choice -- which is what makes them fun after all -- but it's not like a tabletop rpg, where you -- or YOU -- can take a beating, return to town for a rest, then return to the dungeon for more donnybrooking. Fighting Fantasy gamebooks are almost always about forward movement, with branching paths that nonetheless carry you forward.

It's also rare to have allies, and when someone else does turn up to help, they either hang around for a couple of fights then run off, or they get eaten by a GIANT CRAB (SKILL 10 STAMINA 11) after two paragraphs. I was surprised to discover that the recent Port of Peril features a non-player companion who not only hangs around for a fair chunk of the book, but is also somewhat competent.

All of this means that gamebook characters verge on the superheroic; they have to be to have a fair chance against the individual book's many challenges.

You can perhaps see where this is going. Translate that to a multiplayer rpg and you have problems. Now there's a group of four or five titans -- ho ho! -- wandering about, cutting through monsters and shrugging off traps; there's fun in that -- I ran a short and self-explosive campaign along those lines and it was brilliant -- but it's not sustainable for extended play.

The other issue is -- and I'm aware of the irony here -- that the randomness and simplicity of character generation means that some characters are much better than others. When you have only three player-character statistics and those are generated by dice rolls, you can end up with characters with wild differences in competence and survival prospects. Again, this isn't a problem with a one-off adventure but it can cause problems for a campaign. Advanced Fighting Fantasy makes the issue worse with its advanced skill system; your SKILL score also determines the points you add to your SKILL to determine the value of your special skills, so if you roll well, you get even better, and if you don't roll well, you never catch up.

I mention all this because Troika! is more or less an alternate Advanced Fighting Fantasy -- see, I told you it would be relevant -- and is going to be vulnerable to the same issues, unless author Daniel Sell has found solutions. 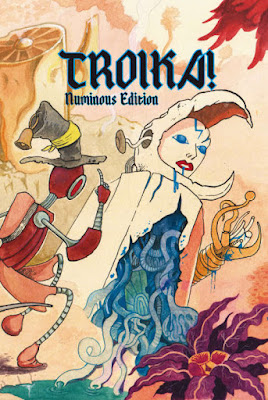 The SKILL problem is solved by acknowledging the inherent imbalance and randomness in the system and embracing it as a feature; maybe your rolls are crappy but look, you're a space giant with a magic map! It's a gutsy approach; adding even more randomness with the Backgrounds system and sort of trusting that things will balance out, or at least will be more interesting.

If we're thinking in terms of pure numbers then I don't think the problem is fixed -- it may even be worse -- but the strength of the addition of Backgrounds is that they give players interesting things with which to play that are not just numbers to plug into the combat or skill checks or whatever. The other advantage of this approach is that it adds no mechanical complexity, so the game remains simple. I approve.

(A quick aside: I'm playing in a D&D5 game at the moment using the revised ranger class and it comes with a bunch of special abilities that aren't mechanical as such -- they don't interact with target numbers, dice rolls, character statistics, or anything like that -- but still have a significant impact on the game world. It almost feels like cheating and I'm loving it.)

The STAMINA problem is tackled by inflating damage output. In Fighting Fantasy a GOBLIN (SKILL 5 STAMINA 5) with a sword can hit you for two points of STAMINA damage. In Advanced Fighting Fantasy the same GOBLIN can do between one and three points. The Troika! GOBLIN can ruin your day with up to ten points per kidney-poke! It's swingy and brutal and it's not the approach I would have taken but it looks like it should work, and will make for fast and exciting combat.

The other big change to the original Fighting Fantasy is a new initiative system. You add tokens, such as dice, to a bag -- player-characters get two each, henchmen get one, opponents get a varied amount -- and then characters act as their token is drawn from the bag, until the "End of Round" token is drawn and everything resets. This mechanic is tactile and unpredictable and I adore it, but I can imagine that the unpredictability of it could prove too much for some.

Elsewhere the game is much the same as Fighting Fantasy. It's simple, quick, and with the major issues of the original resolved, it seems quite robust. That said, Troika! isn't just a new edition of a venerable classic, as it abandons the generic fantasy of Jackson and Livingstone's Titan for something somewhat more exotic.

The setting is implied through the Backgrounds and the monster list, just enough to give a feel of the world without pages of maps and historical data. It's a strange world, a little bit Planescape, a little bit Book of the New Sun, a little bit Spirited Away. It feels decadent and almost febrile, the same way David Lynch's underrated adaptation of Dune does; I imagine the world of Troika! is hot and sweaty and everyone is struggling under some sort of summer cold.

The light touch to setting elements means that it should be easy enough to switch them for those with a closer match to your own campaign backdrop. I suspect it would be a significant amount of work to come up with d66 new Backgrounds, but I doubt it would be arduous.

Sells' writing style is infectious, arch and playful, without coming across as pretentious: "Notice that [starting Backgrounds] only touch the very edge of specificity." At times, when explaining rules, this dancing, slippery tone can border on obfuscation but for the most part it's entertaining and fun to read. 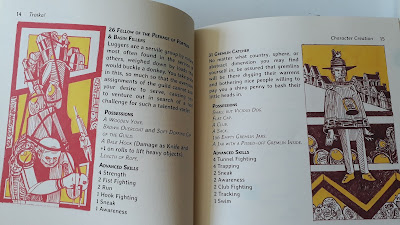 There is less art than I expected from this deluxe release of the game; there was a fanzine-style edition a few years ago. I would have thought the upgrade to a fancy hardback would have meant the book would be drenched in pictures but aside from the Backgrounds section art is scarce. It's all good stuff though; I'm quite fond of the aforementioned Background images by, I think, Dirk Detweiler Leichty. They have this mad, angular, almost abstract look, sort of like the face cards in a standard fifty-two card deck; the style probably has a name but I'm too much of a barbarian to know it. Now that I think of it, a deck of character generation cards would be a lovely little gimmick.

The book's design and layout are neat and functional and it's quite easy to read and navigate; the use of old-school rules organisation -- "6. Actions... 6.1 Hit Someone... 6.2 Shoot Someone", and so on -- is a bit excessive in a game of this complexity but is a cute stylistic flourish. The book is a sturdy hardback and is presented in A5, the One True Format, so extra points there. I will dock a significant number of points because the character sheet doesn't have "Adventure Sheet" across the top but you can't have everything, I suppose.

While I have some quibbles with Troika! they are minor, and on the whole it's a solid and entertaining update and enhancement of one of my favourite role-playing games; should I be lucky enough to once again run a Fighting Fantasy game in the future, I will probably use Troika! because Troika! is ace.

Troika can be purchased in digital and physical forms. 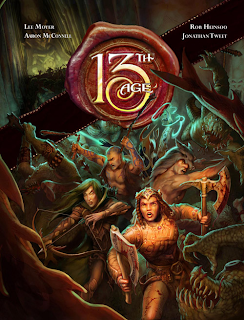 Even if I never play 13th Age again -- and I do hope that is not the case -- I will have a serious think about pinching the One Unique Thing and Icon mechanics for the next game I run, because they generate so much potential fun.
Scrawled unintelligibly by thekelvingreen at 9:35 am 2 comments: