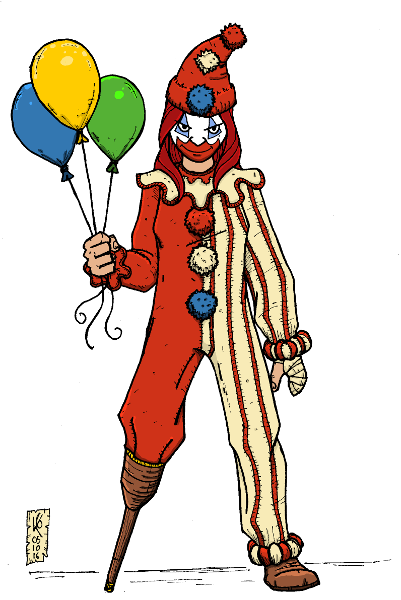 A promotional piece for Lamentations of the Flame Princess, tying into the coulrophobia craze that is now sweeping at least two nations.
Scrawled unintelligibly by thekelvingreen at 6:47 pm 4 comments:

Email ThisBlogThis!Share to TwitterShare to FacebookShare to Pinterest
Labels: clowns, Lamentations of the Flame Princess, stuff that I drew

I shouldn't be even thinking about this right now. In a couple of weeks, we'll be restarting our Dracula Dossier campaign, and after that I'm supposed to be running Phoenix: Dawn Command, and at some point I should run Genlab Alpha since I backed the Kickstarter, and I've got a Lamentations of the Flame Princess adventure part-written that seems to be sprawling out of control, and...

I was up in That London a couple of weeks ago to visit friends and we tried to play the remastered Chaos Engine, except Steam was being silly and the controllers went wonky and made an already difficult game even more tricky and...

The Chaos Engine is ace, a Gauntletish two-player shoot-em-up with a steampunk aesthetic before steampunk was a thing, and as we played we wondered why no one had done anything with it. James suggested a film adaptation, but I thought it would make for a good campaign setting. Have a look:


I imagine that a Chaos Engine campaign would be similar to Pool of Radiance, Big Rubble for RuneQuest, or Games Workshop's much-missed Mordheim, with a dash of Escape From New York and a healthy smearing of Roadside Picnic. Baron Fortesque's experiment has led to London being evacuated -- with the government moved to Birmingham or Oxford or something -- and left as an urban waste packed full of monsters and weird science gone wrong. Her Majesty's armed forces have established a somewhat secure perimeter around the city and there is much adventure to be had in nipping across the border into the Chaos Zone and exploring the former capital.

The abandonment of London would probably be swift, with much left behind, so adventurers could be employed to recover an aristocrat's belongings from his Mayfair residence, now occupied by psychotic mutant dinosaurs. Perhaps they hear about a bank vault that was never emptied during the evacuation, and must race to crack open the vault before other treasure hunters -- or worse -- get there.

People would have been left behind too, so the player-characters could be asked to enter London to find a missing family member, or at least discover if they still live. Perhaps Uncle Alf is still alive, but has been transformed into a mindless brute; is there a way to reverse his mutation? What of Baron Fortesque? Many would be interested in his rescue, or indeed capture. 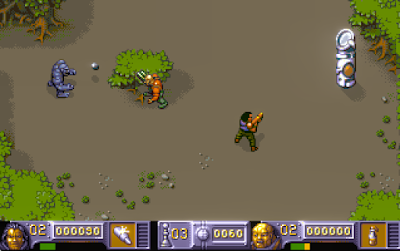 The Chaos Engine is trying to extend its area of influence by installing "nodes" that act as relays for whatever weird energies the Engine is producing, transforming the area and mutating its inhabitants; in a more military-themed adventure, the player-characters could be tasked to find and destroy these devices in order to push back the Engine's effect, but perhaps there are other rogue scientists who would pay for the technology's covert recovery.

Baron Fortesque's mansion would be the tentpole dungeon of the campaign, a manor house twisted by the Engine's power into a strange multidimensional labyrinth, at its heart the Chaos Engine itself, a huge boss monster made of brass and steam that squirts out homicidal robots and time-tossed energy beings.

(The Engine has one further secret that those who completed the original game will know, but I won't spoil it here.)

I'm not sure what system I would use to run The Chaos Engine. A mashup of the Doctor Who and Primeval rpgs could work, but given the pulpy adventure feel Savage Worlds looks like the best fit; there's even a Victorian era monster hunting sourcebook available in Rippers. There's some work to be done; adventures need to be written and the monsters require an overhaul, as in the original game they just run around and shoot, and differ only in visual design and how many bullets they absorb.

Getting The Chaos Engine ready to run would not be a great deal of work but it would be a significant amount, and as I mentioned above I have loads of other projects on the go. That said, there's something compelling about the idea, compelling enough that it buzzed around in my head for days and prompted this post, so perhaps I will return to the strange alternate 1893 in a future brainsplurge.
Scrawled unintelligibly by thekelvingreen at 7:42 pm No comments: