Reed Richards is a C**T! (or, Karmic Imbalance in the Fantastic Four)

I've written a number of articles for Comics Bulletin over the years, but this is the one that's most well-regarded, or so I'm told. I'm posting it here because the original has gone missing with the revamp of the Comics Bulletin site. I should warn you, it's a bit rude in places. It's also not indicative of my current writing style, but it feels somewhat dishonest to rewrite it.

It is a truth universally acknowledged that excessive hubris on the part of comic-book characters is swiftly and brutally punished, usually via some sort of industrial and/or scientific accident. Or your kindly old uncle getting shot in the face. Something suitably horrible anyway. Perhaps the best example is that of the Fantastic Four's nemesis Doctor Doom, an individual scarred both physically and mentally as a result of being too proud to accept help from his buddy Reed Richards, he of the prematurely greying hair. It's arrogant enough that Doom sought to breach the barriers of reality and bring back his deceased mother, as a college project (I wrote a dissertation about freedom and happiness, and I don’t have to wear a mask to hide my grossly deformed face. Go humanities!), but his calculations were wrong, and he just wouldn't listen to Richards when he pointed out the error in Doom's maths (curse that Imperial/metric divide!); as a result, the experiment literally blew up in his face, and Doom got chucked out of university. Luckily, as a monarch, a job at the local burger emporium did not beckon, but nonetheless Doom's arrogance was rewarded in full.

That's just one example from many in the Marvel Universe and beyond; it's very much a basic law of most fictional universes, and yet there is one whose arrogance is just as prevalent as Doom's, but who has so far been suspiciously overlooked by this fundamental axiom: Reed bloody Richards.

I've long wondered why, as a Marvel fan through and through, I've never really warmed to the Fantastic Four comic; it's the "World's Greatest Comics Magazine" after all, so surely I should like it? It was while reading issues from Mark Waid's run on the main Fantastic Four title that I came to a grim realisation: it's because Reed Richards, by all rights, should be just as screwed up as Doom, but somehow isn't. As a direct result, my sense of karmic justice screams like a girl at the very sight of the bendy brainbox and his incessantly smug attitude. He calls himself "Mr. Fantastic" for crying out loud; anyone else would get a swift karmic thwack for such an attitude, but not our Reed. Oh no, the universe likes him.

As I was always taught to in school, I shall now illustrate this point with vividly realised examples. These are, for the most part, from Waid's run, which is not to single Waid out for particular criticism, but just because they were the issues I had read most recently, and the ones that clarified why I dislike Richards so very, very, much. Trust me, he's always been like this.

Now Doom, he's a smart cookie; he is after all the second-most intelligent man in the Marvel Universe. Perhaps the most intelligent, if his supreme arrogance didn't get in the way, etc., etc. Anyway, in the "Unthinkable" story arc (#496-500) he works out that Reed always outdoes him in battles due to his greater scientific knowledge (you know, this realisation is itself a bit of a minor redemption for Doom, but no karmic reward for that, no siree) so he turns to magic, correctly surmising that Reed won't know what to do in the face of forces he can't understand with graphs and a slide rule. The Smug Four get resoundingly thrashed, and the crowd (i.e. me) cheers for the Latverian Legend™. Up pops Doctor Strange, who tells Reed that he needs to respond using magic himself, and that using magic is not a case of simply learning principles and rules and making them work for you. This whole sequence is intended to humble Reed and thus develop his character, but such arbitrary conceits aren't for Reed Richards! No, instead of seeing the truth in Strange's words, because as Sorcerer Supreme Strange probably knows what he's talking about when it comes to magic (not counting that embarrassing Wanda/Chaos Magic incident), Reed instead decides that magic is exactly about learning principles and rules and making them work for you. In order to prove his mastery over all things, he pinpoints the exact magic keywords which will allow him to use a set of magic knuckledusters (why Strange has taken to handing out bejewelled enchanted street weapons is not revealed) to give Doom a good thrashing. Later, where you'd expect Reed to muse on how he's been taught a valuable lesson about how he views the world, you get nothing of the sort; what is intended as a humbling experience for the rubbery Napoleon becomes merely a minor hindrance to his vast and unstoppable intellect.

And that's the problem in a nutshell; Reed is almost always right about everything, and even when he's not, events mysteriously conspire to make it so. I can only assume that there's an Untold Tale in which Richards hops in the Fantasticar and zooms off to catch the Marvel Universe's manifestation of karma (no, not the New Mutant) in flagrante with some Rigellian ladyboys, because I really don't see why he should consistently get away with this shit.

In order to further flaunt his casual disregard for universal moral justice, he decides to repeat Doom's original experiment in the "Hereafter" arc (#509-511). Whereas Doom got a free atomic facial as his reward for such an affront to the Almighty, Reed's "punishment" is the healing of his grievous wounds and a personal audience with God, who tells Reed that he really likes him a lot. Gee whiz and shucks. As a bonus, it's revealed that it's not Reed that's holding Ben Grimm back from the afterlife but Grimm himself, who really doesn't want to leave the side of such a swell guy, and so returns home with the gang. It should be noted here that the very reason why the Thing is dead at this point is because Reed shot him in the chest with a big chuffing plasma cannon. I'm pretty sure that randomly gunning down your best friend shouldn't end quite so happily for all concerned, although apparently, unstable molecules mean that the shit never sticks. 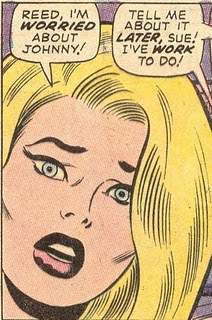 And it's not just close friends and colleagues who get the short end of Reed’s ego stick; prompted by Reed's rather creepy paternalistic and chauvinist attitude towards her, Sue went mental in Fantastic Four #281, becoming the supervillain Malice. Obviously, one can't really condone getting dressed up in an elaborate set of spiked leather thongs and trying to kill your family, but Reed did play a significant part in it (refusing to acknowledge your superhero wife as anything more than a sidekick could conceivably be regarded in some circles as "a bit shitty"), and yet there's no acknowledgement of such. Reed starts off by engaging in a string of petty insults in order to burn out Sue's anger; that he seems rather too at ease with these insults is just part of the fun of being Reed Richards. He even slaps Sue at one point, but because he's not Hank Pym, no one remembers that bit. Once Sue is "cured," Reed then explains what's been going on in a typically patronising manner, which apart from being exactly the attitude that set Sue off in the first place, lets him off the hook quite neatly. No one steps up to say "hang on Reed, shouldn't you be taking some responsibility for this mess?" Johnny Storm knows better, having worked with Reed for years, and Sue is too wrapped up in saying how right Reed is; Daredevil and Avengers butler Jarvis are also present, but they've already been treated like mere lackeys by the flexible fascist, so they're probably staying quiet just in case he starts waving his ego stick at them.

There seems to have been a misunderstanding at some point over at Marvel; someone, somewhere, when setting down Reed's personality, failed to realise that being right about stuff doesn't by default make you any less arrogant. It merely makes you arrogant and right. And it's those people who are the most infuriating; someone who's supremely self-confident but also quite wrong is an annoyance, but one that we can laugh at, if only to make ourselves feel better. Someone who's just as self-confident but also happens to be quite right about everything is an utter c**t, and all we lesser hominids can do is rattle our fists at them and say "Damn your eyes!" or a similar oath, depending on personal preference. Batman is quite clearly a graduate of the confident/correct school but the edge is taken off it because not only do the residents of the DCU know it and treat him accordingly, but everyone knows Batman's a bit mental. Reed Richards is of the same category, but no one else seems to realise it; with him, it's always "Good job, Stretcho!" or "You’re right Reed!," and with each such utterance, I come more to see Doom's side of things. Which is in itself frustrating, because the poor sod never catches a break with Reed snorting up all the good karma like it’s a line of fine grade cocaine.

There are two obvious solutions to this heinous injustice; one is to have everyone in the Marvel Universe wake up one day (perhaps after some reality-tinkering from Mephisto...), realise what an utter swine Richards really is and respond to him appropriately. No, the Thing and the Human Torch occasionally making fun of him doesn't count, although Sue's on-again-off-again attraction to a fish instead of her husband is a significant step in the right direction. The other solution is to stick a minor retcon into that original science experiment and make Doom half right about those calculations; Doom's sums were skewiff, but so were Reed's corrections, and it's Reed's numbers that lead to the explosion and the creation of his nemesis. Richards can then be right about everything else, and it won't be as irritating, because we already know his arrogance is getting punished, through the constant presence of his most ruthless and dangerous foe. Pre-emptive karma would be a bit of a cheat, but it would serve him right, the smug git.

Update: Since this article was originally written, Reed became one of the most ardent supporters of Adolf Stark's "Imprison or Kill as Many of Your Friends As Possible Initiative," going as far as building a concentration camp in Annihilus' back yard in which to lock up his superhero comrades, and even growing a clone of Thor to hunt down and murder those who resisted. Understandably exhausted by all this hard work, Reed then went on a long vacation with his wife Sue, leaving the Black Panther behind to clean up his mess. Bastard.
Scrawled unintelligibly by thekelvingreen at 2:21 pm 5 comments: