After far too long, I've returned to my (ostensibly) ongoing subplot for Brad the Vampire, kicking off this time with #396. How long this stint will last, I know not.
Scrawled unintelligibly by thekelvingreen at 1:49 pm 1 comment: 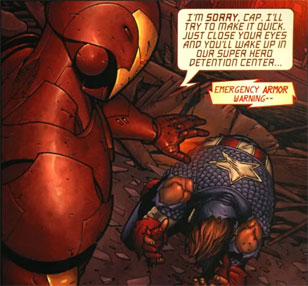 That's right Iron Man, put the Marvel Universe's most inspirational figure in an enclosed facility with hundreds of superpowered people, most, if not all, of whom will be at least sympathetic to his cause. I mean, it's not like Captain America's the kind of tactical genius who could organise a jailbreak within hours of arrival, or anything lke that.

It's a shame that X-Statix got cancelled. I'd have loved to have seen them do a Civil War tie-in. They could team up with Dazzler to do a "stop the war" charity record or something.
Scrawled unintelligibly by thekelvingreen at 12:06 am No comments:

If the last issue consists of a Thor versus Thor fight, with the real Thor utterly kicking the arse of Tony Stark's weird sex-clone-thing, it won't make up for the abundant clichés, the complete lack of much-promised moral/political analysis, or the woefully badly written characters.

But it'll be spectacular.
Scrawled unintelligibly by thekelvingreen at 11:01 am 2 comments:

Marvel have released a preview of their new Mighty Avengers series, a comic designed to win back the old Avengers fans who, like me, have abandoned Brian Michael Bendis' New Avengers. In some ways, this is a nice friendly move from Marvel, as Bendis' series sells shedloads, and the company could just sit back and watch the money come in, regardless of the feelings of the established fanbase (who, for all their moaning about how much better the old days were, could only manage to muster up about half of today's sales figures).

But I won't be buying this new series, as it seems to be woefully misjudged. The warning signs were there when Marvel announced that they'd be producing a series for the old fans, written by the very same writer who'd alienated them in the first place. And from the preview, it seems that what Bendis evidently thinks is missing from his New Avengers is lots of fighting. While that is indeed missing from his slow-moving, indulgently scripted anti-superhero comic, it might also be nice to include some effective characterisation and a semblance of plot, like the original Avengers title did. To be fair, the preview is only a handful of pages in length, but it reeks of superficiality and fundamental creative misjudgement.

Oh well. I still have my back issues.
Scrawled unintelligibly by thekelvingreen at 10:26 am 5 comments: