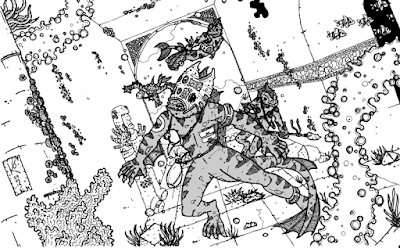 Email ThisBlogThis!Share to TwitterShare to FacebookShare to Pinterest
Labels: sahuagin, stuff that I drew 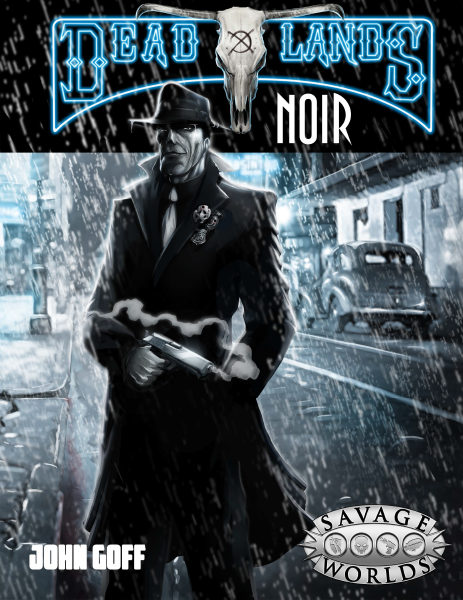 Despite many attempts I have never warmed to Deadlands. I like Westerns, and I like supernatural Westerns -- High Plains Drifter is ace and Preacher is one of my favourite comics of all time -- and I have a fondness for multi-genre kitchen sink games, and I love Savage Worlds, so I should like Deadlands but it's never clicked for me. Big, perplexed shrug.

As such I wasn't too interested when Pinnacle Entertainment Group cranked the game world's clock forward a few decades for Deadlands Noir, but Stuart was interested and a good thing too as we've played a couple of sessions in the past two weeks and it's been great fun.

Stuart was not impressed with the published campaign for the game so he chucked it out and instead wrote something a bit more freeform and situation-based that saw us playing as employees of a struggling private detective agency tasked with finding a New Orleans socialite's lost poodle. From that humble start we uncovered a Mafia interest in the case, borrowed some money from said criminal organisation without asking them first, kidnapped a spy, recovered an experimental weapon, shopped said spy to his enemies, blamed the missing money on that poor spy, and -- most crucial of all -- found the lost dog.

Oh, and there were some zombies too.

The walking dead aside, the game has captured the noir feel, with multiple factions all vying for the prize and our hapless detectives -- most of whom seem to have no useful detective skills, and proved unable to shoot guns or drive cars with any success -- in the middle, doing everything they can to come out of the mess with something in their favour and as few bullet holes as possible.

It has been big heaps of fun so far; how much of that is hardcoded into Deadlands Noir and how much is a result of Stuart's adventure design I don't know but I feel none of the ambivalence I've felt to Noir's older cousin. I am already looking forward to my next visit to this strange and dangerous alternate New Orleans.
Scrawled unintelligibly by thekelvingreen at 6:45 pm 3 comments: