Scrawled unintelligibly by thekelvingreen at 3:06 pm No comments:

I meant to do this ages ago, when Nige did it, but I forgot, and Rol has since reminded me. So here goes, again in no particular order: 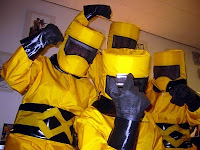 Hydra's goons get proper supervillain costumes. The Hand's ninjas all get pyjamas in which to go and get beaten up by Daredevil. AIM though, they get to wear, well, what they wear to work. I love that it's just their work uniform, no fuss, no frills, like they walked out of the factory and straight into a brawl with Captain America. 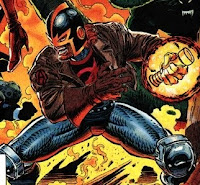 The 90's were a dark time in comics, when many very silly things happened. Superman grew a mullet, Spider-Man got a suit of armour, and the Avengers got leather jackets. Rumour has it that someone at Marvel saw that the X-Men comics were selling shedloads, and decided that it was because of the matching leather jackets they all wore, and so forced the Avengers writers to include similar outfits. Sales did not increase.

Still, ill-advised as they were, there's something charming about the Avengers team jackets. It's a neat way of creating a united team visual while still keeping the individual costumes. See also the nextwave trenchcoats and Jubilee's hipster X-Men parka, the latter of which is now in the possession of one Mr Scott Pilgrim.

Not his actual one, obviously. Not that he has one. Well, he might, I don't know what he gets up to in his spare time. Anyway... the reason I like this one is because it's a very clean design with one foot in the pulp forebears of superhero comics, and the other in a more modern style, but which retains some subtle nods to the whole feline schtick. I'm not really one for making superhero costumes more "sensible", but this is one which works.

7. Daredevil's black costume
No, not that one. 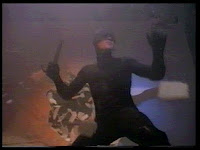 The one he wore before the hideous yellow outfit, as told in Frank Miller's Man Without Fear miniseries. It's basically a black tracksuit, complete with white trainers, but there's something devil-may-care about that, and after all, DD's blind, so what does he care what he looks like?

Because it's so, er, strange. There's no unifying design, the colours are all over the place, you've got that weird liver spot pattern on the gloves, the nonsensical shirt logo (is it a bird? An angel?), and the plain leggings, as if they ran out of ideas by the time they got to his waist; it's a visual mess, but because it's Steve Ditko, it's a glorious mess which somehow still works. Strange wore a trenchcoat for a while in the 90's too, but it didn't suit him.

5. Hela
Just look at the design. It's all design. It's got design dripping off it, there's so much design going on. And yet, it's actually quite a simple two-tone thing. Kirby busted out these simple geometric costumes now and then, and they're his best designs by far.

It doesn't really matter which one, as they're all great in their own way (except the dodgy Rob Liefeld Heroes Reborn one). My favourites are probably the one from the Byrne era on Avengers, and the "silver centurion" one from just after that.

3. The New Green Goblin
The Ditko design is a classic, make no mistake, but I really like Humberto Ramos' early-2000s revamp, which is actually not really much of a revamp at all, it's just drawn differently. The shirt is gone, but the green chainmail is still there, and the mask is the same, it's all just a bit better in some way I can't properly describe.

I suppose technically this is the Tim Drake costume, although the image is from Teen Titans Go! and it's probably Dick Grayson wearing it there. Anyway, it's a good set of colours, a clean design, and an effective contrast with his mentor's costume, something the more recent angsty versions have forgotten.

1. Spider-Man's black costume
The red and blue is a classic, and rightly so, and

as Rol points out, it makes perfect sense in the context of the character's masked wrestler origins. All that said, the black costume looks great. It fits the spider theme perfectly, and for a few years in the 1980's, it made for a striking image unlike any other hero in comics. I know it's all part of the grim-and-gritty movement in the superhero genre of the time, and the costume begat a decade of rubbish symbiote stories (and Spider-Man 3), but it's a great visual.

Honourable Mentions:
I would have picked MODOK, but the iconic image there is not really a costume, more a general character design. Ditto Thor, Hellboy, Death's Head and Rocket Raccoon. I almost picked the Frank Quitely X-Men costume, but it's probably aged worse than the Avengers' jackets. Finally, the Hobgoblin would have been picked if Ramos hadn't beefed up his predecessor's look.
Scrawled unintelligibly by thekelvingreen at 3:12 pm 6 comments:

I have said that this new A-Team film looks a bit like kids playing dress-up, a sort of grown-up version of Son of Rambow. Or perhaps this:

I'm not sure I can tell the difference.
Scrawled unintelligibly by thekelvingreen at 10:39 am No comments:

I don't tend to do music posts. I'm not an erudite musichead like Rol; I discovered The Smiths twenty years after the fact, as a particularly embarrassing example. I tend to like stuff no one else does (but not Country, because even I'm not that out of touch), so I don't really feel like I have much to blog about music.

My mate Bob knows a fair bit though, and he's in a band and everything. They've just released a single, which you can buy on iTunes, Amazon, and Napster, apparently, although I had no idea Napster was still going. I quite like it (the song, not Napster), although I think there are better tracks on the upcoming album, and one stonking song that the Reverence haven't recorded for some unfathomable reason, perhaps so that they can release Japanese-exclusive bootleg live albums later on.

Anyway, you can see the video for the song at the band's website, and if you like the song, it's only seventy-nine of your English pence.

It's not Country.
Scrawled unintelligibly by thekelvingreen at 7:47 pm No comments: