Spiders are intelligent. At some basic level everyone knows this, even if they don't admit it to themselves, because admitting it invites all sorts of existential horror.

The little ones aren't much for conversation or philosophy but have a keen and innate understanding of geometry and structural engineering that dwarfs that of any other species except for perhaps the, er, dwarves.

The big ones -- the ones the size of people -- are as intelligent as people, if not more so. The phase spiders are geniuses but they're also weird, even by the standards of spiders, because they're thinking in more than one dimension at once. 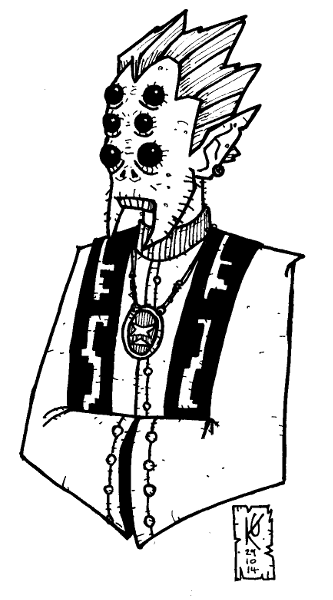 The problem is that spiders are obsessed with order and see everything in terms of its place in the grand structure of the universe -- thanks China Miéville! -- so when they try to interact with other sentient species they come across as detached and a bit alien at best, and AIEE! MONSTERS! at worst.

Being clever sorts the spiders realised that they needed some sort of go-between to help them deal with other species and convey their great plans without the encounter descending into stabbing, which is just the sort of inconvenient and tiresome business that upsets the order of things. No spider would be able to deal with the limited and erratic viewpoints of the non-arachnid species for long so they created the ettercaps, hybrids of spider and humanoid and the intended ambassadors of spider kind.

Ettercaps are created when a humanoid is captured -- elves and orcs are favoured because they're the most chaotic and removing them is seen as an efficient way to tidy up the universe -- and encased in a cocoon which is then subjected to a phasey-wasey process that changes the creature within. A few days later the cocoon rips open and an ettercap is released.

Alas, ettercaps are frightening creatures in their own right and despite their best attempts at peaceful discourse often invoke the AIEE! MONSTERS! response -- and that's before anyone finds out how they're made -- but the spiders are working on that.
Scrawled unintelligibly by thekelvingreen at 8:54 pm 2 comments:

Email ThisBlogThis!Share to TwitterShare to FacebookShare to Pinterest
Labels: ettercap, monsters, my monster manual, stuff that I drew, stuff you can use

This got leaked today.

I think I'm more excited about this one than I was the first.

Over past few months people have expressed worries about the main actors coming to the ends of their contracts, or deciding that they didn't want to play superheroes any more, and other such doom-laden prophecies. The general sense seems to be that it would be a disaster of  Onslaught-like proportions if Robert Downey Jr refused to play Tony Stark again.

The thing is, it doesn't matter in the slightest. 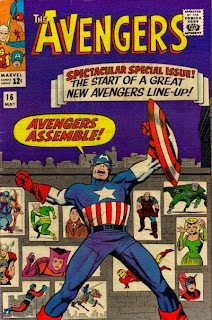 This issue came out in 1965, just two years after the first issue of The Avengers, and in it the founder members decide to leave the team and new heroes are introduced to the world. There was a great gnashing of teeth and much moaning about the inevitable death of the comic -- the letters pages for months afterwards read much like the message boards and forums of today -- but what in fact happened was that the title carried on and is still going today, and the team reshuffle has happened again and again over the years, so much so that it became one of the classic Things Avengers Do, in the same way that the X-Men are always playing baseball.

Films are different aren't they? Audiences won't go and see a blockbuster full of new characters will they? Well, Marvel released Guardians of the Galaxy, a film full of new characters -- none of which had any solo films to introduce them to the general non-comics-reading audience, as the Avengers did -- and it turned out to be one of the most successful films of all time. They have proved that it doesn't matter if normal people have never heard of Rocket Raccoon or Drax the Destroyer, and by the same token as long as Avengers 4 is good it won't matter if the main characters are Doctor Druid, Firestar, and Triathlon.

Besides, the new Avengers team introduced in that issue includes Hawkeye -- who we know already -- and Quicksilver and the Scarlet Witch -- who both happen to be featured in Avengers 2 -- so if Marvel does want to do something similar with the film franchise, I think they have it well in hand.

Anyway, enough of that. I didn't realise until today that I hadn't posted anything all month. Oops.

Next: ettercaps.
Scrawled unintelligibly by thekelvingreen at 6:53 pm No comments: