I was quite enjoying 2009's Star Trek remake, right up until the end, in which New Kirk orders the destruction of the crippled Narada. Star Trek is supposed to be an optimistic view of humanity's future and yet here the heroes more or less murder their opponents, backed by stirring music leaving the audience with no doubt that it's a heroic act and not, you know, a war crime.

So to my mind, New Kirk is more a villain than a hero and so when I see the trailers for the new film show him getting his comeuppance at the hands of Benedict Cumberbatch -- who is almost always excellent, and is playing a character who is not just a cackling villain but seems to have a legitimate grievance -- I have to admit that I am intrigued.

The problem is that based on the first film, I have no confidence at all that anything interesting will happen. New Kirk will blunder in like a thug, his mindless violence given tacit approval by the film-makers, any questions raised by Cumberbatch's character's motivations will be ignored, and New Kirk will not learn anything or develop as a character. Perhaps worst of all, Cumberbatch is going to be wasted in the role of a punch bag.

Of course, I am being unreasonable. There's no way the film-makers are going to allow their hero to lose, but the way they've set him up that's the only outcome that I could see satisfying me. I'm going to see Star Trek Into Darkness this week, so let's see if they can surprise me.
Scrawled unintelligibly by thekelvingreen at 6:53 pm 6 comments: 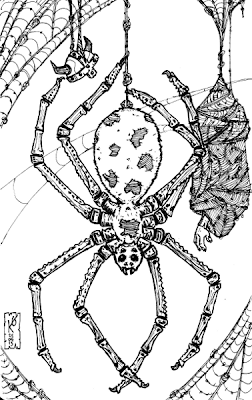 Writing continues on Horror Among Thieves, and the occasional drawing like this on the side helps keep writer's block at bay.

Scrawled unintelligibly by thekelvingreen at 12:20 am No comments:

The Incomplete Crown of Nyarlathotep

Masks of Nyarlathotep is a good rpg campaign, considered one of the best ever written, and with good reason. I have never run or played it, alas; my original gaming group had just finished Horror on the Orient Express when Masks came back into print, and we were too exhausted to dive straight back into a major campaign, while my current group is made up of people who have either run or played it in the past. I have read it a number of times and while that means I have of course missed out on some of its highlights, its strengths are such that most of them are still apparent outside of play.

One of the aspects I like most about the campaign is the structure. The players get to a certain point early on at which the whole world opens up as a setting for play. It is revealed that the cultists the player-characters have just tackled in New York are not alone, and there are allied cults all over the world working together to bring Nyarlathotep to Earth.

There is a time limit, but otherwise the player-characters can take on the various cults in any order. Although the campaign feels epic, it doesn't do it through imposing a strict narrative order.

We've been playing Paizo's Carrion Crown campaign adventure path, a glorious and cheesy homage to classic horror topoi, and it's been great fun. We've also been tracking down a maliferous cult, and in the most recent session -- about two thirds of the way into the campaign as a whole -- we discovered something of their plans, including a map of where in the setting they'd been and where they're going. It's a bit like Masks of Nyarlathotep, except this cult seems to have only planned one step ahead of us.

To be fair, Pathfinder campaigns do not seem to feature the most flexible narratives, even when they are accompanied by the trappings of a sandbox, so it's no real surprise that Carrion Crown didn't open up in a similar way to Masks, but it is still disappointing, because finding a map with "Go here next!" on it in big red letters -- I exaggerate, but not much -- only draws attention to the linear nature of the plot.

The Pathfinder campaigns are released in monthly instalments, but that shouldn't prevent a more open structure to a Masksified Carrion Crown. I doubt many people play the things as they are released, and besides, Paizo could have chosen a publication order without imposing a narrative order; Masks of Nyarlathotep is a physical book and is by physical necessity presented in a certain sequence, but it doesn't have to be played in that sequence.

Perhaps a more open structure would have been difficult to meld to Pathfinder's level-one-to-level-twenty power progression, a mechanical issue about which Call of Cthulhu doesn't have to worry; tackling Nyarlathotep in Shanghai is just as difficult as fighting him in Cairo in Chaosium's system, but Pathinder characters in the same situation might find themselves too powerful as a result of their experiences in one location to find much of a challenge in another. All that said, D&D players have been running open sandbox games with the same kind of progression for decades and Paizo should be able to figure out how the maths of their own core system work.

Carrion Crown is fun to play, by far the best of Pazio's offerings we've played so far, but I can't help but imagine how much better would it have been if they had pinched the structure of Masks of Nyarlathotep. The latter campaign may be almost thirty years old now, but it seems it can still teach the game designers of today a thing or two.
Scrawled unintelligibly by thekelvingreen at 1:21 pm 11 comments:

Here's this week's update on Horror Among Thieves, again as much for me as it is for anyone else.

Scrawled unintelligibly by thekelvingreen at 8:58 pm No comments:

Email ThisBlogThis!Share to TwitterShare to FacebookShare to Pinterest
Labels: Forgive Us, games, Horror Among Thieves, Lamentations of the Flame Princess

Rejoice! The gods have arrived! 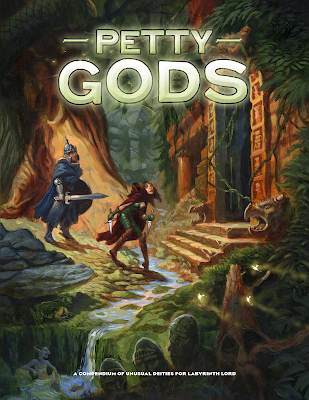 As mentioned not along ago, Greg Gorgonmilk has taken it upon himself to resurrect -- heh -- James Maliszewski's dormant Petty Gods project, and in exciting minor deity news, the first release from that project has been, er, released.

On the way is an expanded special edition of Petty Gods, with all sorts of extra appendices and celebrity contributors and such like -- I'm not sure how I feel about that last bit, as it seems to detract a little from the community-driven aspect of the original project, but I suppose no one's getting hurt -- but out right now is a pdf of the original version of the book, or as close as we can get to it without James' involvement. It's a wonderful piece of work that's full of great ideas, and if the expanded version is half as good it will be great. Until the flashy bonus edition arrives, you can download the Original Petty Gods -- for free -- here.
Scrawled unintelligibly by thekelvingreen at 8:46 pm No comments:

Email ThisBlogThis!Share to TwitterShare to FacebookShare to Pinterest
Labels: Fluxalle, games, Neuph, Petty Gods, self promotion, stuff that I drew, stuff you can use
Newer Posts Older Posts Home
Subscribe to: Posts (Atom)