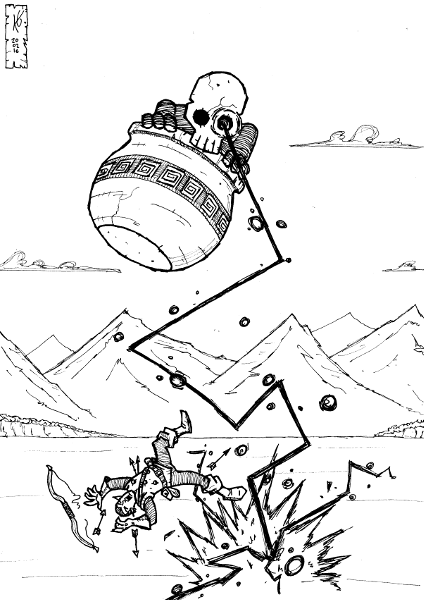 Scrawled unintelligibly by thekelvingreen at 2:07 pm No comments:

Email ThisBlogThis!Share to TwitterShare to FacebookShare to Pinterest
Labels: Hubris, stuff that I drew

We're playing D&D5 again. This time, Manoj is running the game. He doesn't run games often so it would already be something special even if it weren't so different to what we've done before.

In a lot of ways it needn't be a D&D5 game at all; we've been in a couple of fights and have used skills and spells here and there but for the most part the mechanics have been of little importance. Instead the game feels like a series of puzzles, and I have found it difficult to play.

I don't mean that as a criticism; rather I find I'm exercising parts of my brain that I wouldn't expect to when playing D&D. If anything it feels like a tricky Call of Cthulhu investigation, and I love Call of Cthulhu.

The first session saw our party involved in a Deathtrap Dungeon style event, from which we emerged triumphant. This made us favourites of the new queen, who then sent us on a mission up north to deal with some troublesome goblins.

Well, no, because while it could have been a case of crawling through caves killing off goblins here and there, as we've all seen a million times before, instead we found ourselves in a more complicated situation.

The villagers and the goblins lived side by side in peace up until the recent unpleasantness, but an elven merchant -- we don't trust him, because he's an elf -- claims that the goblins killed a group of villagers, and only he escaped.

Some villagers have fought back and captured -- and tortured -- the goblin chieftain's son. Other villagers can't believe that the goblins are now hostile. The local baron wants the goblins wiped out and has hired mercenaries. The goblins have enlisted the help of a hobgoblin warband. We half suspect both the mercenaries and the hobgoblins are working for the baron. The elf is up to something shifty. There may be a silver mine involved somewhere. Our ranger is certain that there's a demon working behind the scenes. We all suspect the elf.

Things are about to boil over into conflict and there we are, trying to work out what is happening, and then to work out how to stop it getting any worse, and it is challenging.

Part of me wonders if I've been overthinking it and in fact it is a simple go-and-kill-the-greenskins adventure, one that we've made more difficult for ourselves by assuming there is more going on than there is. If that is the case, it has still been fun to engage with a more complex situation than we expected, even if the complexity is of our own making.

The most recent session ended with our party inviting the hobgoblin leader to negotiate, only to find ourselves surrounded in the woods by the entire warband. We'll see what happens next.

Update: Stuart has written about the game from his perspective here.
Scrawled unintelligibly by thekelvingreen at 1:43 am 1 comment: