The Mighty Thor gets The Mighty Round in, from Ultimate Secret #3 (2005).
Scrawled unintelligibly by thekelvingreen at 7:44 pm No comments:

It wasn't Mike and Angelo...

That was on ITV, and featured some annoying Yankling in big white 80's trainers. This was on the Beeb, and was just as bad, but had no embarrassing grabs at transatlantic popularity. Teenage lad makes friends with an alien who wore nasty shellsuits and who (either because it was a cheap way to make him look alien or because his race were shapeshifters and got bits wrong, like Odo on DS9) had back-to-front ears. He also had this weird amulet thing and if he lost it, he'd gradualy start to weaken and fade away, which of course happened every episode.

Any ideas?
Scrawled unintelligibly by thekelvingreen at 5:00 am 4 comments:

And this one's just here to point out that I'm still alive. Not much else to report beyond that, really.


Oh, that's not quite true; I did get We ♥ Katamari. It is great.
Scrawled unintelligibly by thekelvingreen at 7:20 pm 1 comment:

It be International Talk Like A Pirate Day today, ye scurvy wastrels!


Some of the circumstances they experienced seemed to parallel those of Christians. The penguin is falling behind, like some Christians are falling behind. The path changes every year, yet they find their way, like the Holy Spirit.

The Christian Right in America sees a movie about penguins as the Word of God. Some days, I feel like I can't get out of here fast enough.

Which is a shame, as earlier today I had a nice chat with the bloke in the pizza shop about Kevin Keegan, Brighton and Hove Albion, and Crystal Palace, and I felt a little like I was at home.
Scrawled unintelligibly by thekelvingreen at 6:07 am 3 comments:

The only new season programme we've watched so far is Fox's Head Cases, which is yet another lawyer show, but one that just about works, due to some quirky characterisation and good acting.

It also got me thinking (again!) about why there has never been a Daredevil series. The concept seems perfect for television; the goal seems to be to stick to established formulas (doctors, coppers, lawyers), but with a twist to distinguish them from other shows (the doctors are all students, the coppers are in fact the forensics guys in the lab, the lawyers are just out of the loony bin), and Daredevil seems perfect for that. The lawyer side can provide the case of the week stuff that these shows thrive on (and the stuff that was missing from the movie), and Matt Murdock is a character with enough angst to fill episode after episode with soap opera shenanigans. Then you've got the superhero stuff to add that extra twist that the television companies crave. And if you play it right (do it like Frank Miller did), you can present the superhero bits as realistic parts of this gritty crime-ridden world. Daredevil doesn't need any super expensive cgi powers either.

So Marvel, this is my proclomation: get on that please. Or at least get Bruce Timm in to do Daredevil: The Animated Series.
Scrawled unintelligibly by thekelvingreen at 5:31 pm 1 comment:

I don't really follow cricket as well as I could, and many of the mechanics (particularly of Test scoring) remain impenetrable to me, but even I understand that today was a good day. Good job, lads.
Scrawled unintelligibly by thekelvingreen at 12:01 am 5 comments: 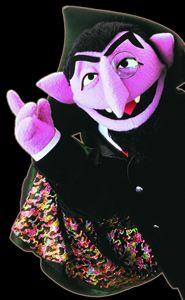 So, not only have they made Cookie Monster go cold turkey because they think it's him that's making the little Yanklings fat, rather than the omnipresence of MuckDonald's, but I found out yesterday that the cascist funts that now run Sesame Street have gotten rid of that bit where the Count von Count (the Street's finest resident, bar none) would laugh maniacally as thunder rumbled and lightning flashed behind him, because it might frighten children.

Never mind that he's been doing it for thirty years without any significant negative impact on the world's youth.

Rhode Island, or at least the Providence bit, is a lovely place. We had a pretty good time, although we didn't get many pictures, and I failed to take the opportunity to visit any Lovecraftian sites (his grave was too far away to walk to, and I only discovered how accessible his birthplace was after we left), but we got the important (and strenuous) work done, which was moving Meg's sister into college.


If I can find any interesting pictures from the trip, I'll post them. Subject to veto, of course.

Scrawled unintelligibly by thekelvingreen at 6:56 pm No comments: