(Names withheld to protect the innocent)

A: You know, football can be a bit dull. They should replace the players with glamour models and fill the playing area with jelly. Perhaps strawberry jelly.

B: Or even better, instead of twenty-two models, have forty-four!

Email ThisBlogThis!Share to TwitterShare to FacebookShare to Pinterest
Labels: my so-called life, sport 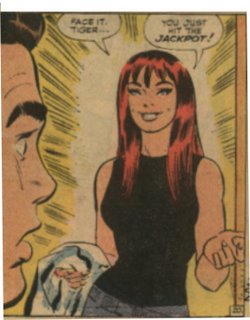 My formative Spider-Man reading years saw him swinging with the Black Cat, so I have no particular attachment to Mary Jane as the love interest of choice for the discerning wall-crawler. But...

Marvel editor in chief Joe Quesada wants to "unmarry" Peter Parker (Spider-Man) and Mary Jane because he says that Spidey is the everyman hero (true), that he could be any one of us, and that being married to a supermodel damages that concept, because the average bloke on the street has no hope of meeting a supermodel, let alone being married to one.

However, what Quesada appears to have overlooked is that the average bloke on the street doesn't have the proportional strength and agility of a spider either, and yet Spidey's remained an "everyman" with that particular baggage for over thirty years.