These are from Barbarians of Orange Boiling Seas, an upcoming adventure written by Zzarchov Kowolski for Lamentations of the Flame Princess. 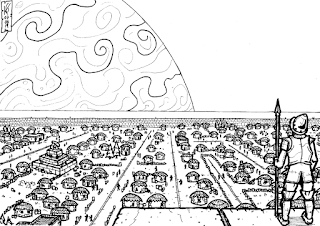 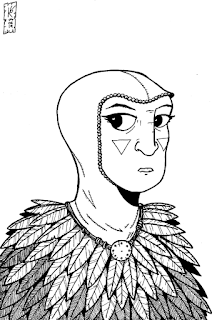 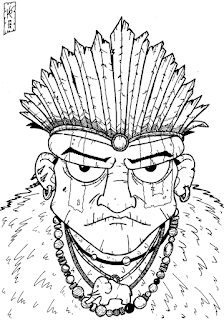 This one was supposed to be the matriarch of a Neanderthal clan, but it looks more like Doctor Who person Steven Moffat. Oh well.

I believe the adventure will be released at this year's Gen Con in August, and will be on general sale soon afterwards.
Scrawled unintelligibly by thekelvingreen at 11:31 am No comments:

Email ThisBlogThis!Share to TwitterShare to FacebookShare to Pinterest
Labels: Barbarians of Orange Boiling Seas, games, Lamentations of the Flame Princess, stuff that I drew

Following on from the probably-incomplete list of games I have played, here are the games I have owned but have not played, and in some cases haven't even read:

2300AD
3:16 Carnage Amongst the Stars
13th Age Glorantha
Apocalypse World
Cyberpunk 2020 (I have to play this next year, before it's too late!)
Forgotten Futures
Godbound
Into the Odd
Lacuna Part I. The Creation of the Mystery and the Girl from Blue City
Lady Blackbird
Lords of Creation
Mage: The Ascension
Make You Kingdom
Marvel Super Heroes Adventure Game (I may never play this as I don't have the cards!)
Masque of the Red Death and Other Tales (this is technically a campaign setting but it changes AD&D2 to such an extent that I'm going to include it; thanks to Martin for the inspiration!)
Mekton II
Mutant Future
Nemesis
Night's Black Agents
Psi World
Puppetland
Silent Legions
Silent Titans
Small But Vicious Dog
Tenra Bansho Zero
Troika!
True20
Villains and Vigilantes

These are the games I've bought or -- in the case of freebies -- made an effort to acquire. Most are hardcopies, with a handful of pdfs; I am not including all the free pdfs you get given every so often at Drive Thru RPG because then the list would go into the hundreds and that way lies madness.

It's not as bad as I thought, although it is a little bad; there are things here that I will never play and I know it. The bigger issue perhaps is the number of adventures and campaigns I've bought with no clear idea of when they will be played; perhaps that's a list for another post, if I can stand the crushing shame of it all.
Scrawled unintelligibly by thekelvingreen at 10:54 am 2 comments:

Email ThisBlogThis!Share to TwitterShare to FacebookShare to Pinterest
Labels: games, I want to play, lists

I replied with a list. Then remembered a few more. Then another few more. Then some more, then I gave up and decided to post the list here instead. I knew I'd played more than four. I didn't realise it had been more than ten times that.

This list doesn't include the games I've owned and never played -- which is a smaller list, but only just! -- nor the games for which I've generated characters and then the game never happened.

I think that's it, but I expect to remember half a dozen more games about thirty seconds after I click "Publish".
Scrawled unintelligibly by thekelvingreen at 10:49 am 4 comments: 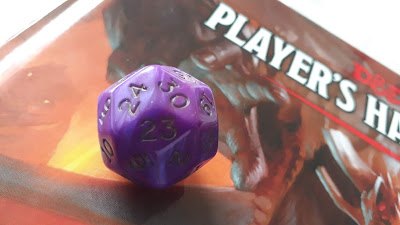 My group is always forgetting about Inspiration when we play D&D5 so here's an idea to make it more memorable:

When a player gains Inspiration, give them a d30 and when they "cash in" the Inspiration they get to use the d30 instead of the usual d20.

This method gives the player a unique token that stands out amongst the usual table detritus, plus Inspiration itself gets a bit more oomph, both of which should make the mechanic less forgettable in play.
Scrawled unintelligibly by thekelvingreen at 12:05 pm 2 comments:

Email ThisBlogThis!Share to TwitterShare to FacebookShare to Pinterest
Labels: breaking your game, d30, Dungeons and Dragons, games, stuff you can use
Newer Posts Older Posts Home
Subscribe to: Posts (Atom)