A few weeks ago James Raggi of Lamentations of the Flame Princess put out a call for magic items to include in his long-awaited referee's book. As an infrequent contributor to the LotFP canon I felt I had to have a go but alas my item wasn't picked, so here it is for you to use as you wish. 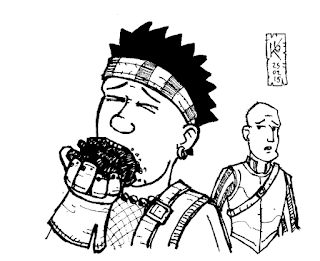 This is the heart of a great hero -- or at least someone notable for great deeds if not great moral virtue -- dried or pickled in strange herbs and unguents and enchanted by an evil witch. To unlock its magic the whole heart must be eaten, then three things happen: first of all, the diner is ill in a most messy and violent manner and must save against Poison or be bed-ridden for 1d6 days.

After this the character will feel rejuvenated and full of confidence and will be able to perform one superhuman feat. For example:
Unknown to the character, they have six months in which to perform this feat or the power dissipates and is wasted.

The third thing that happens is that after six months -- whether the feat is performed or not -- powerful spirits will appear to kill the character and take their heart -- not always in that order -- back to the witch so that another Hero’s Heart can be created. These spirits should be difficult, if not impossible, to defeat.

Unless the character has access to some sort of miraculous power, that is.
Scrawled unintelligibly by thekelvingreen at 9:40 pm No comments:

Email ThisBlogThis!Share to TwitterShare to FacebookShare to Pinterest
Labels: games, Lamentations of the Flame Princess, stuff that I drew, stuff you can use

More Than Meets the Eye

The loot table in the last post came to me in my sleep; so did this, although I expect it to be of less utility to gamers everywhere. 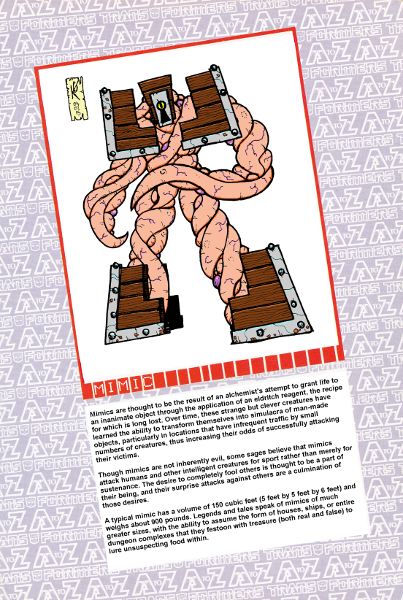 I suspect it is in part inspired by the mimics from Final Fantasy XII, which were robotic spider things that turned into chests; it's a small step from there to an actual Transformer, but then I've gone back the other way and made it an organic creature.

The text comes from the Pathfinder reference document.
Scrawled unintelligibly by thekelvingreen at 5:01 pm No comments: