I don't do New Year resolutions because they're a bit naff and seem dishonest; if you're going to make a significant lifestyle change, why wait until the first of January? If it's worth doing, it's worth doing now, yes?

That said, here are some things I'd like to get done in 2016, but none are of the life-changing sort:

Run The Dracula Dossier. I love Dracula and the idea of mashing it up with a Bourne Identity style spy Eurothriller and making that the basis of a role-playing game is exciting. Alas, I am unconvinced by the Night's Black Agents ruleset and I am unimpressed by the minimal support given in The Dracula Dossier itself for running the thing, but I will persevere.

Run Eyes of the Stone Thief. I've been itching to get back to 13th Age for a long time, and this campaign looks like great fun.

Paint my eldar army so I can play some second edition Warhammer 40,000 with Stuart, although he will probably play necrons and necrons were a bit overpowered experimental in 40K2, so I'll be painting them only to send them to their deaths. Oh well.

Read more. This is my unread book pile as of right this second: 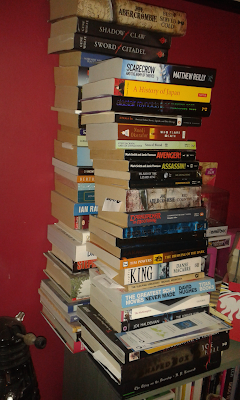 That doesn't include about a dozen larger-format books that won't go on the pile without collapsing it. I was starting to catch up, then Christmas happened.

Write more. Forgive Us came out a long time ago and people have asked for a follow-up. I've had some ideas but nothing has yet made it past both my own self-doubt and James Raggi's keen eye; I think we have something now, so I hope that will appear before June. Well, I hope it will appear before March, but let's be realistic.

Catch up on computer games. I have a rule that I don't get a new computer game until I've finished one, but that doesn't stop other people getting them for me and throwing the system out of whack. I've got my eyes on some upcoming releases so I need to clear the queue before they arrive. This would be easier if PlayStation trophies didn't sit there, glinting and taunting and implying that no, I haven't really finished the game, even if I did beat the final boss.

Play more and different games. I didn't quite manage fifty-one different games in 2015 but I got closeish. I'd like to try lots of different things in 2016; I have a number of unplayed games on my shelf and I know that the rest of my group is the same even worse, so this shouldn't be too difficult.

"Shouldn't be too difficult" I say, but some of those books have been in that teetering pile for over three years, and the eldar have been sitting in an undercoated state for about two. Oh dear.

But I shall be confident! I'll revisit this post this time next year and see how well I did. I bet you cannot wait.

I shall be reading.
Scrawled unintelligibly by thekelvingreen at 9:05 pm 2 comments:

Those of you looking forward to more of Guthrun's Viking Diary -- hello Mike! -- will have to be patient; our GM is taking bit of a break so we'll be returning to our longboat in a few weeks. Until then, Stuart has stepped in and has resumed his Deadlands Noir campaign and has summarised the most recent session in two parts here and here for those interested; I am playing Doctor Ross LeBoeuf, a character with zero combat ability but a knack for persuasion.

I am having great fun. The game is based on Savage Worlds, a system of which I am quite fond, and Stuart has done an excellent job of creating a vivid playground full of interesting options; the adventure with the supersoldier-turned-boxer that took up a couple of evenings of play was a side job quite unrelated to our characters and their goals, and I have no doubt that there are plenty more of these off-piste tangents hidden in the setting. Each of our characters does have what could be called a main plot that is there to be pursued should we so choose, but there's also a real sense that we can wander off and do anything we like; after a few years of packaged adventures -- some of which have been quite good, lest this be seen as an attack on the published campaign format -- it's quite refreshing to play in a game that seems to offer so much freedom.

I've wanted to run a game of this sort for a while. The last time I had any success with such a format was a bonkers Fighting Fantasy campaign that I made up as I went along in my teens; my Rogue Trader campaign was an attempt to do something similar but it collapsed for a number of reasons, and my Stardust Investigations Call of Cthulhu thing was supposed to be an open, player-led game, but I don't think I communicated that idea to the players, so that didn't work either.

One day I will try again - perhaps with Modiphius' post-apocalyptic Mutant Zero -- but for now I have a number of more structured but exciting campaigns to run, and I'm quite happy roaming around Stuart's alternate 1930's New Orleans.
Scrawled unintelligibly by thekelvingreen at 8:04 pm No comments: