Bear with me, this does come together. Sort of. 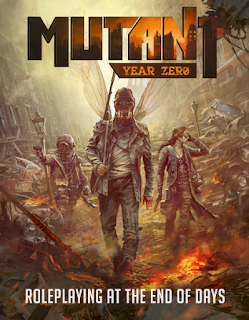 Thought one. I like role-playing game mechanics that give players things to do that aren't "my character does this". I'm thinking of things like the winter phase in The One Ring or Pendragon, where we see what happens between adventures, or the domain management rules in D&D, or the way the player-characters' survivor community in Mutant: Year Zero works. This is stuff that affects the game world and the characters but isn't about playing the characters themselves.

Thought two. In cyberpunk games the setup tends to be player-characters versus the evil corporations. I can see why; the source fiction supports it, faceless corporations make good villains, as the real world shows us -- ooh, politics! -- and it's a fertile ground for adventure and conflict. What you don't tend to see is players as corporations. I'm sure there's a Shadowrun sourcebook for playing as a corporation, because there's a Shadowrun sourcebook for everything, but otherwise the only instances I can think of are the card game Netrunner, which puts one player in the role of the corporation, and the computer game Syndicate, in which the player takes the part of the COO of struggling Eurocorp, in a setting in which corporate disputes are resolved with minguns and rocket launchers.

You can see where I'm going with this. How about, instead of the usual cyberpunk setup, or even placing the player-characters as corporate agents, letting the players be the corporation itself? Let's take Syndicate as the basic structure, with the players taking control of a minor corporation's business affairs. We could split the gameplay into two main phases.

The first would be a "boardroom" -- for lack of a better word -- phase in which projects and research are funded, intelligence on rival organisations is gathered, and shareholders can demand certain actions. We could probably cannibalise Mutant: Year Zero's ark mechanics for this.

The second part of the game -- which I will call the "street" phase -- would be more traditional, with corporate agents -- the player-characters -- going out into the neon-drenched city to disrupt the schemes of other corporations by recruiting their employees, stealing their plans, and eliminating their agents. Perhaps there could be some sort of resource mechanic that puts a limit on the mission; once the situation on the ground becomes unprofitable the team is ordered to pull out, unless the players can convince the board to extend funding. Maybe that's too spreadsheety.


The end goal would be up to the players, but becoming the pre-eminent corporation is the obvious one. I wouldn't want to delve too much into the business side of things; the idea is to provide some background and structure for the adventures, not to spend half of every session going through an accurate simulation of corporate economics.

If your group isn't into cyberpunk -- I suspect at least one member of mine wouldn't go anywhere near this in that genre -- then the same kind of structure could be applied with ease to something like Eberron and its dragonmarked houses, or a colonial setting, whether it's the East India Company or the Eastern Galactic Arm Company.

Would anyone play this? The fact that Hostile Takeover: The Faceless Corporation RPG doesn't already exist suggests not, but I think it could be fun.
Scrawled unintelligibly by thekelvingreen at 10:25 pm 7 comments:

Email ThisBlogThis!Share to TwitterShare to FacebookShare to Pinterest
Labels: bonkers campaign ideas that will probably not happen, cyberpunk, games, MYZ, Shadowrun, stuff you can use, Syndicate

Over at his blog Stuart has been putting together some warbands for Mordheim Frostgrave. There are piles of random miniatures clogging up Brainsplurge Towers and I thought I could use them to put together a gang of my own, so Stuart loaned me the Mordheim Frostgrave rulebook.

The game seems to be quite anthropocentric so hardcore Mordheim Frostgrave players will probably tut into their beards, but here we go. 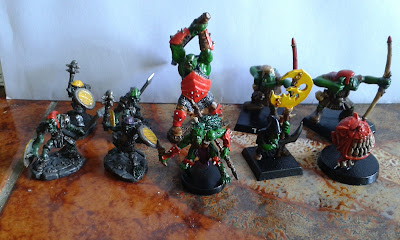 Mordheim Frostgrave doesn't do shamans as such, so Grotbags is a witch. She's searching the ruins of the Frozen City for the legendary Pink Windmill and the treasures it is said to contain. Grotbags is armed with a staff and a flint dagger, and her spells are absorb knowledge, brew potion, fast act, grenade, mud, plague of insects, poison dart, and raise zombie.

Grotbags' apprentice is Snozzrot, a "mighty goblin sorcerer". He carries a dagger and a bulky moon-headed staff that he claims makes him a more powerful spellcaster but probably just makes him an easier target.

Bazz, Chazz, Gazz, and Wazz are Snozzrot's thuggish cousins and used to spend all their time bullying him. Now that he's a "mighty goblin sorcerer" they are hanging around on the off chance he finds some treasure.

Robbo and Orkeye are supposed to provide long range support but are not averse to using goblins as target practice should the opportunity arise.

Choppa was encountered one day trying to head-butt a rock to death; Grotbags saw potential in the idiot barbarian and brought him on-side by promising unlimited rice pudding.

I have no idea how this will work in play. I suspect the barbarian and warhound are wastes of gold but barbarians are always fun and I couldn't resist that squig miniature. I've gone for area control and buffing magic, with only a couple of direct damage spells, and this may end up a mistake, but we'll see how it goes.
Scrawled unintelligibly by thekelvingreen at 2:07 pm 3 comments:

Back in January, Brian C asked me -- because I’m always banging on about how much I like Call of Cthulhu -- for my thoughts on both the new Delta Green role-playing game and Kevin Crawford’s Lovecraftian Silent Legions. I had a look at Delta Green in March and here’s the belated follow-up. 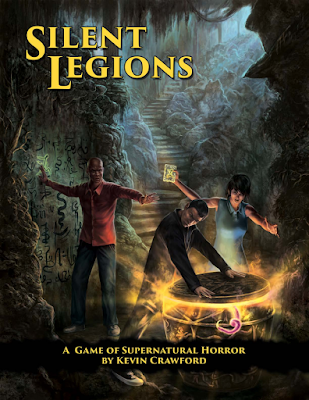 In terms of game mechanics Silent Legions is more or less B/X Call of Cthulhu, although you won’t see that stated anywhere in the book, for legal reasons probably. You’ve got character classes, levels, hit dice, saving throws, and all that classic D&D stuff, only transposed to a modern day horror setting, and with a sanity system bolted on. There is a skill system in there too, and it looks a bit like the one from Traveller, but I don't have a lot of experience with the venerable space game, so I may be way off.

It all looks quite robust but it does little for me. I didn’t grow up with D&D and I’m not one of these people that tries to use one ruleset to fit every genre -- says the person who used Call of Cthulhu to run a Night’s Black Agents campaign -- so there’s nothing here that grabs me and makes me want to play it. It’s not a bad set of rules but I can’t get my head around the idea of 6th level librarians as anything other than a joke, and you’re never going to win me over in the Space Year 2017 with odd artefacts like descending armour class.

It’s a matter of personal taste, it’s probably irrational, and may even be hypocritical; there’s nothing inherent to Call of Cthulhu or Trail of Cthulhu that makes them any more suited to Lovecraftian gaming than classic D&D, and I’d probably feel different if I had more of a background in the game. I don't, so it all seems a bit odd to me.

I'll stop going on about it now because the rules of the game only take up about a quarter of the book; the bulk of the tome is all about designing a supernatural horror campaign. To be more precise, it's about building a supernatural horror sandbox campaign, and this is what led to me backing the Silent Legions Kickstarter back at the end of 2014. Crawford has picked up a lot of acclaim for his campaign design systems in other releases like Red Tide and Stars Without Number, so I wanted to see what he could do with an investigative horror rpg. 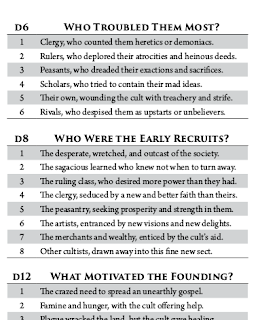 What we get is a big, multifarious toolkit for designing a Lovecraftian setting, complete with gods, cults, monsters, and even alternate planes. There are procedures for designing the region in which the campaign will be set -- this could be something on the scale of Arkham County, or it could be the entire globe if you want to go full Masks of Nyarlathotep -- and the individual locations within that region. There are tools for such fine grade details as individual non-player-characters and even specific scenes.

All of this is presented as dice tables so it is possible to generate an entire random Xhoandhora Mythos. You can even roll up eldritch names, like I just did there. You can of course just pick the bits you like.

This stuff is all gold and while I'm indifferent to the ruleset in Silent Legions, I want to try the campaign generation tools right now. I want to generate cults, their histories, and their plans, I want to design pantheons of gribbly space gods, and I want to populate a map with blighted towns and sinister woods. Then I want to plonk a group of player-characters in the middle of it all and see what happens.

Perhaps the best bit is that aside from a couple of details, this vast chunk of the book is not tied to any particular system and you could use it in any horror game. It screams to be used and its utility is vast, cyclopean even, and it's well worth getting, even if you have zero interest in playing a 6th level librarian.
Scrawled unintelligibly by thekelvingreen at 11:23 pm 5 comments: