I haven't read Edge in ages. It always took itself a bit too seriously for my liking, the video game equivalent of the pretentious hi-fi magazine, and then they gave Halo 2 ten out of ten and that was about it for me.

As such I missed out on their Minecraft cover in 2011, but as it's the magazine's twentieth anniversary this year they've been reprinting some of their favourites, and as a result I spotted this in the library at work this morning. 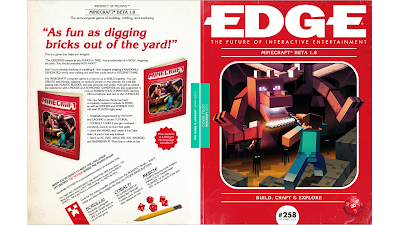 Now one might argue that Minecraft and Dungeons and Dragons don't have that much in common but I still like the homage, perhaps because of my long-standing fondness for the 1983 Red Box.
Scrawled unintelligibly by thekelvingreen at 7:29 pm 1 comment:

I am without doubt laying a curse on it by writing this, but my gaming group is -- after delays and personnel changes -- about three sessions away from finishing the Carrion Crown campaign "adventure path" we started almost two years ago. This may not seem worthy of note, until one realises that my current group seems to have a distinct inability to finish games; in the time I've been part of the group we have started and abandoned at least four large-scale campaigns, with two others that are supposed to be there for us to pick up when we're not playing anything else, but if we're honest those are dead too.

This scrapheap of abandoned adventures isn't a bad thing in itself -- sometimes a game just doesn't work for whatever reason and it could be worse to plough on when no one's enjoying it -- but it has become something of a joke in our group so it will be nice if we can finish Carrion Crown, assuming that I haven't now ruined our chances.

I don't know if campaign abandonment is a common issue; mxyzplk at Geek Related seems to run through three or four campaigns a year but he may be an exception. My original gaming group didn't really go for long-term play but we did sort of finish a sandbox style Shadowrun campaign -- I say "sort of" because we played until our GM +Timothy Coxon went to university but there was no neat, plotted end -- and we played Dungeoneer until we broke the system, but I'm not sure that counts. I did manage to finish Horror On the Orient Express with the group but by the time we got to the end the players I had were not the same players who started it, so I'm not sure that counts either.

I seem to have the most personal success with Call of Cthulhu -- perhaps ironic given its dual reputation as being deadly for player-characters and being rubbish for campaign play -- as one of the few campaigns my current group has completed is Tatters of the King; it wasn't a conventional finish as the players missed half of the campaign, but they did defeat the cultists and save the world so I'm counting it.

So when Carrion Crown ends in a few weeks -- again, assuming I haven't scuppered it -- and our GM Ben takes a break from running games to do stuff like move house and study for a master's degree I should perhaps run something for Call of Cthulhu, because there's a likelihood we might finish it; indeed, I will be getting and running Eternal Lies at some point. First though, I'm going to have a go at running the new version of The Enemy Within for Warhammer Fantasy Roleplay; I reckon WFRP is close enough to Call of Cthulhu that we've got a fair chance of getting to the end.
Scrawled unintelligibly by thekelvingreen at 8:57 pm 5 comments:

Email ThisBlogThis!Share to TwitterShare to FacebookShare to Pinterest
Labels: Call of Cthulhu, Carrion Crown, Dungeoneer, games, Shadowrun, Tatters of the King, The Enemy Within, Warhammer, WFRP 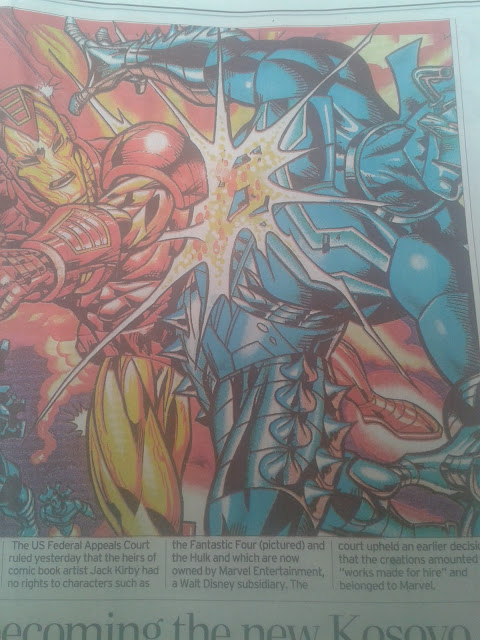 The US Federal Appeals Court ruled yesterday that the heirs of comic book artist Jack Kirby had no rights to characters such as the Fantastic Four (pictured) and the Hulk and which are now owned by Marvel Entertainment, a Walt Disney subsidiary.


Well, you can forgive them for not knowing who Iron Man is, I suppose. He's quite an obscure character after all.
Scrawled unintelligibly by thekelvingreen at 5:45 pm No comments:

Last week I received a note asking how Horror Among Thieves is going; it turns out that it's been a whole year since the Indiegogo campaign funded. That's a bit embarrassing, as I'd intended to have it completed by Christmas and it's clear that I am not ready for even semi-professional publishing.

The good news is that I handed in the text of the adventure to James in May, along with almost all of the maps and art; I have a couple of final images to draw and I'm working on those now. We want to include some bonus adventures as a gift to those who helped fund the adventure and who have been waiting for so long; the adventures are written but I'm not happy with the format, so they'll need a bit of revision. It may be that the adventure is released without them and they get sent out as backer exclusive pdfs later.

Oh, and after going back and forth on the cover image James and I decided to go back to the original idea and as a result we've changed the title of the adventure to Forgive Us. I do love a good pun but the new title does fit a bit better and is more LotFPey.

I'm sorry that Forgive Us has taken so long. It is on its way and I hope it will be worth the wait.
Scrawled unintelligibly by thekelvingreen at 8:46 am 3 comments: