Lots of newspapers have comics sections, but that tends to mean a little pull-out with reprints of Peanuts or somesuch. I recently discovered that the Guardian has a slightly more ambitious comics section, on Saturdays I think; this morning I discovered that they actually have a pretty good comics discussion and news section on their website. I don't think I've ever seen a print version of it, but it's good to see nonetheless. It's not even as highbrow and faux-trendy as one might expect, either.
Scrawled unintelligibly by thekelvingreen at 8:00 pm No comments:

My Life in Comics

I'm not reading many regular series right now, because I'm tired of all the crap. Sorry. But I'm still really enjoying Invincible; it's a simple, solid superhero title that reminds me a lot of the old Stern/Frenz Amazing Spider-Man, only with more gratuitous violence. I could do without that bit, although I understand its inclusion.

Er... the only title I'm reading from the Big Two (and what a joke that concept has become) is Captain Britain and MI:13, but he's been knocking around for decades, so I wouldn't say I've "discovered" him.

If you could draw/write one character who would it be?

The Avengers. I know it's a cheat, but I don't care.
Alternatively, Death's Head.

Are you a fan of the big multi-issue crossover extravaganzas?

In theory, but they're never any good, are they? They're done far too often nowadays; both Marvel and DC have been in a constant state of crossover for about three years now. They always seem to confuse "epic" with "long", and they always promise much but deliver little. I think the last crossover I actually enjoyed was Operation: Galactic Storm, and that was 1992.

Last comic book series that you dropped and why?

Ha. Pretty much all of them. I finally gave up on the Avengers titles because I couldn't justify paying money to see Bendis (puttup!) run them into the ground; I even stopped accepting the free review copies I got through Comics Bulletin because I got worn out by the interminable awfulness of it all.
And then there's Spider-Man. The recent reboot was as wrong-headed, inane, and smug as Boris Johnson at the Olympics, and I couldn't go on reading.
I never thought I'd drop Spidey and the Avengers, but Marvel proved me wrong. However, Bendis (puttup!) is leaving Mighty Avengers, the series he created but proved unable to actually write properly; taking over is Dan Slott, who was one of the Spidey reboot writers, but that mess was editorially-mandated, so I'm cautiously optimistic about his Avengers. It will probably be rendered unreadable by being forced to participate in the braindead crossover of the moment, but I can hope.

Are you a DC or a Marvel fan?

I really don't get DC's heroes. They all seem so stiff and conservative, your grandad's superheroes, if you will. Also, DC reprints weren't nearly as plentiful as Marvel's when I was a nipper, so I grew up on the latter.

Do you remember your first comic/series? 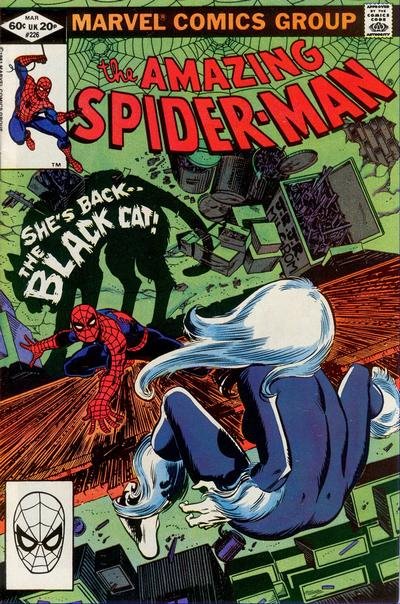 I remember it from a reprint in a Grandreams Spider-Man annual in the early 80's. While I'm sure I read comics before, that story stuck with me all my life, and is largely responsible for me swapping the Black Cat in for the simpering Gwen Stacy in the classic Spidey love triangle.

Is Watchmen the movie going to be as good as the comic book?
Nowhere nearly. The thing is, Watchmen isn't a great story; there's a decent twist, and it's a nicely layered mystery, but it's not a brilliant plot. What's great about Watchmen is the density of the storytelling, the repeated motifs, the playing with the structure and format of the comic book, the focus on aging superheroes past their prime, and the examination of the superhero psyche. All that structural stuff will, by definition, be chucked out in an adaptation (to me, the film looks less realistic than the comic), and I'm not expecting in-depth character psychoanalysis from the director of the Dawn of the Dead remake...

Spider-Man 2 without a doubt.

It's either Batman and Robin or LXG. I'm tempted to put Batman Begins in there too, but it's partially redeemed by Gary Oldman and Michael Caine.

Thor. I hear it's in the works, but it'll probably be awful. They should do it either as a gloriously over the top fantasy, pulling liberally from Kirby and Simonson, or drench it rain, blood and mud and play up the viking aspect.

I'm not a fan of Daredevil, but it baffles me that there hasn't been a TV show already. You can do the superhero stuff, and since he's low powered, it'll be cheap on the special effects; you're not going to need to spend millions on a cgi Galactus, for example. You can do plenty of the soap opera love life stuff, since Matt Murdock's got more than a couple of notches on his bedpost. And then there's the courtroom stuff. There's enough material for three shows in there.
Scrawled unintelligibly by thekelvingreen at 10:46 pm 3 comments:

For a good few months now, I've been chucking around the idea of a post-zombie-apocalypse sitcom. Not in any serious way, since I'm not a writer and am unlikely to ever be one, but I've mentioned it to a few people. I mean, "zombie apocalypse" is a situation, after all, and I've long held that you can find something to laugh about, no matter how grim the situation. And the genre standard of the house occupied by six or so survivors drawn from various backgrounds tallies up nicely with the usual sitcom small cast/one set structure.

Like all my best ideas, it's just been done by someone else.

If you're on Facebook, then please pop over to my new group and vote. Following on from the likes of Garen, Tony and David, I'm going to be doing one of these daily art challenge thingies, only my one won't be halfway as good, since they're all proper artists.

Anyway, the basic idea is that every other day, I'll be drawing one cartoon/comic character from the beginning of the alphabet and one from the end, engaged in some sort of conflict. Starting with A versus Z, we'll then move to B versus Y, then C versus X, and so on. If I've done my sums right, we'll end with M versus N. You can vote for one of the combatants, for both, for the winner, and the type of conflict. I thought it was quite simple, but some people seem to be confused already. Oops.

Anyway, if you have time and a Facebook account (despite it being run by a bunch of Republicans), then do head over and vote. I will more than likely post the images here too.
Scrawled unintelligibly by thekelvingreen at 9:56 pm No comments:

Email ThisBlogThis!Share to TwitterShare to FacebookShare to Pinterest
Labels: a to z, self promotion, stuff that I drew
Newer Posts Older Posts Home
Subscribe to: Posts (Atom)