I was quite pleased to discover that my local library carried the Wake series of graphic novels by Jean David Morvan and Philippe Buchet, as I've been wanting to read them for a while, but being imports, they're hard to find and expensive to buy. They're fun little science fiction tales of the sort the US comics industry appears unable to do and are well worth a read.

Originally published in French as Sillage, these books display an interesting quirk of the localisation process, and one which perhaps points to the differences in how comics are viewed in the US and Europe.

Bloody gunshot wounds to the head?

Graphic impalements on the ribcage of a dead animal?

Graphic impalements on the ribcage of a dead animal and foul language at the same time?

All present and correct, sir.

NAKED BREASTS ARE THE WORK OF SATAN, AND WE WON'T BE HAVING THEM FLOPPING ABOUT ALL OVER OUR COMICS, YOU SICK FRENCH BASTARDS!

Extreme violence and swearing are a-okay, but nipples apparently need to be covered up by magical black bars. The Americans are an odd people...
Scrawled unintelligibly by thekelvingreen at 4:36 am 4 comments:

Stalking in the Key of X

Did you see tonight's Night Stalker episode, "Burning Man"? No? Have you seen X-Files season three episode "Grotesque"? That'll do then, as it's the same bloody episode! Gah.

I mean, I know that the two shows are going to have similarities, but the plot was literally the same, and they lifted a whole chunk of X-script for one scene (alone in their office, the brooding male lead and the brainy/sexy female lead discuss whether science can explain everything; she says yes, he says no). Gah.
Scrawled unintelligibly by thekelvingreen at 4:52 am 2 comments:

Sorry, I have nothing interesting to say, so it's blog meme time!

I saw this at Prawn Bites; it's a list of the (allegedly) most important scifi films of all time, originally from here.

I'll follow Prawn's format; those I've seen are bolded, underlined ones are ones I think are among the most important scifi films ever made. I'm taking "important" to mean films that had some kind of significant impact on how scifi films are made or thought of; I'd say about 90% of the films on the list are essential scifi viewing, but I'm unsure of their importance.

Oh, and I'd love to see what Liam makes of this list.

The Adventures of Buckaroo Banzai Across the 8th Dimension!-I'm not sure this is an important movie per se; while it's a cult hit, and great fun, it's had little influence elsewhere, and I struggle to understand why it's considered important.
Akira-There are better examples of anime out now (Miyazaki made most of them), but the importance of Akira as a scifi film and as a gateway for the West to the world of anime cannot be overstated.
Alien-Good horror movie, but I'm not sure it's important.
Aliens-Good action movie, but I'm not sure it's important.
Alphaville
Back to the Future
Blade Runner-This should be important; it's pretty much the only decent cyberpunk movie out there (excluding anime), and it shows how perfect cyberpunk is for the medium of film. But hardly anyone (again, aside from anime) has tried to follow in its footsteps.
Brazil-I'd say that anything by Gilliam is important, but whether anyone notices that is another thing entirely. Has he ever made a popular film?
Bride of Frankenstein
Brother From Another Planet
A Clockwork Orange
Close Encounters of the Third Kind-Overrated tosh.
Contact
The Damned
Destination Moon
The Day The Earth Stood Still-Another that should be important, if only because it bucks the trend of 50's American scifi and actually has a positive message.
Delicatessen
Escape From New York
ET: The Extraterrestrial-More overrated scifi tosh from Spielberg.
Flash Gordon: Space Soldiers (serial)
The Fly (1985 version)
Forbidden Planet-Conventional wisdom says this is an important film. I'm not so sure.
Ghost in the Shell-GitS is sort of the "next generation" Akira, a ten-years-later update that reminds the West of what animation can do. It's a beautiful film, but really not much good as a narrative, and again pretty much everything Miyazaki has made is better.
Gojira/Godzilla
The Incredibles-Why exactly is this considered important?
Invasion of the Body Snatchers (1956 version)-50's paranoia about Communism and the Other, blah, blah. The 70's one is better.
Jurassic Park-In my opinion, this is Spielberg's finest scifi film, and I'd guess it's important if only from a special effects perspective.
Mad Max 2/The Road Warrior-Like The Matrix, this is important in that it opened up a new genre for filmmakers, but (a) most of the subsequent films were rubbish, and (b) I'm not sure "post-apocalyptic car chase" is an important genre. For what it's worth, I love the Mad Max trilogy, and my favourite of the three changes regularly, but it's most often this one.
The Matrix-Undeniably important, if only because it opened Hollywood's eyes to the possibilities of scifi cinema, and got scifi films as a genre out of a rut. Of course, they went straight into a Matrix-inspired rut, but oh well.
Metropolis-I'm not sure if I've seen the original or not. I think I have. But I've definitely seen the Tezuka remake/reimagination, which I (blasphemy!) prefer.
On the Beach
Planet of the Apes (1968 version)
Robocop-I'm not sure if this is an important film, or if I just want it to be, but it's one of the best satires of 80's America around, and I've always taken good scifi to be something that has a point, a message, to it.
Sleeper
Solaris (1972 version)-Better than the remake, even if it is six hours long and very boring.
Star Trek II: The Wrath of Khan
Star Wars Episode IV: A New Hope-Important doesn't necessarily mean in a good way...
Star Wars Episode V: The Empire Strikes Back-Is this any more important than RotJ? No. Is it the one that's trendy to like the most? Yes.
The Stepford Wives
Superman-Absolutely. Delivered on its promise that "you'll believe a man can fly". The sequel is better (and one of the best superhero movies ever made), but there wouldn't be a sequel is this film hadn't shown that superheroes work really well on film if you do them properly. And I don't even like Superman as a character.
Terminator 2: Judgement Day-Great action movie, and certainly important in a pushing the boundaries of technology kind of way. When it came out, all the talk was about the special effects technology, but in recent years, people have come to realise that Cameron might actually have something interesting to say about fatherhood and humanity in there somewhere.
The Thing From Another World-50's paranoia about Communism and the Other, blah, blah. Now, I love this film to bits, but I'm not sure it's important as such.
Things to Come
Tron-Oh come on. Tron? I can't fathom exactly how this is important. There's some proto-cyberpunk stuff in there, but you can count the number of cyberpunk movies on a hand and a half, and even so, they take after Blade Runner much more than this. And as a cgi pioneer, Tron is lacking, as it doesn't actually contain a significant amount of cgi...
12 Monkeys-See Brazil. And by the way, I'm not sure why he's put the numbers down here under 'T'. Isn't it more appropriate to list them before the alphabetised bit of the list?
28 Days Later-Huh?
20,000 Leagues Under the Sea
2001: A Space Odyssey
La Voyage Dans la Lune
War of the Worlds (1953 version)

Thoughts? Omissions? I'm always tempted to put the underrated Stargate on these lists, although I'm not sure it's an important film. I've still not seen Donnie Darko, but I know enough about it to be surprised that it's not included. I'm similarly surprised that Night of the Living Dead (at least) isn't on the list, especially as 28 Days Later is.
Scrawled unintelligibly by thekelvingreen at 8:09 pm 9 comments:

Money For Nothing (Hooray!)

One of the reasons we moved to America was because we thought that the feverish capitalist economy would allow us to easily get jobs and make a start on our lives. However, we reckoned without Bush, and we've been no better off financially here than we would have been had we stayed in Blighty.

However, on the basis of this job ad, things aren't looking too bright back home either:

Scrawled unintelligibly by thekelvingreen at 7:25 am 2 comments:

We've all seen them, either languishing on the shelves of video shops, or in their natural habitat as "Original Movies" on the SciFi Channel; the modern American monster movie. With a cast full of D-Listers and/or complete unknowns and/or ex-porn stars and/or Bruce Campbell, an anaemic script and really dodgy cgi monsters, it's SciFi's decision to show these incessantly but not pick up Doctor Who that makes many a science fiction fan shake their head in bafflement and sadness.

But it turns out that these films are in fact documentary evidence of true events! Witness Alligator vs Python: Whoever wins, we get cheap purses!

Thanks to the gang at areyougoingtoeatthat for, er, that.
Scrawled unintelligibly by thekelvingreen at 9:17 pm 2 comments:

It's fairly well known that The X-Files was inspired and influenced by the original Kolchak, the Night Stalker, but they were never really that similar. So it's a bit bizarre to see the new remake of The Night Stalker coming across more as a remake of The X-Files than its actual inspiration. "Spooky" pre-credits sequence? Yup. Strange but brilliant investigator throwing away his promising career to pursue the weirder stories? Yup. Said career move prompted by the mysterious disappearance of a loved one? Yup. A sceptical female partner in a sharp suit? Yup. Little pithy voiceover at the end as the "case file" is typed up? Yup. It really is almost identical to The X-Files, to the extent that it was quite jarring when those little typewritten place/time captions didn't appear at the beginning of each scene.

And how bad is the WB's new Dawson's Creek-with-ghosts show, Supernatural, if the only little positive review soundbite thingies they could get for the trailer come not from newspapers or television magazines, but from the show's own message board? Egad.
Scrawled unintelligibly by thekelvingreen at 9:49 pm No comments:

Last night's trashy film entertainment was a film I absolutely loved as a wee nipper (along with the mighty Krull), the utterly demented Maximum Overdrive. Imagine Night of the Living Dead, except set in a truck stop instead of a remote cottage, and replace the zombies (and presumably the social commentary) with murderous sentient lorries, led by an enormous lorry with the face of the Green Goblin! 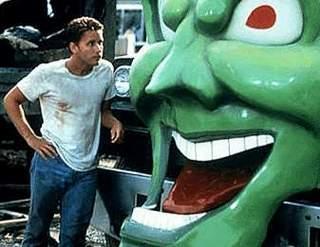 You can perhaps see why my eight year old self loved it, and why my twenty-six year old trash movie loving self loves it too. It is utter rubbish of course, but how could you not enjoy a film that features Emilio Estevez and a lorry pushing each other around in that bizarre "no hands" way that drunk blokes do just before a fight?

A bit over ten years later, they had another go at filming Stephen King's short story Trucks, this time stripping all the "silliness" out in order to create a more gritty, visceral experience. Which seems to be missing the point, if you ask me.
Scrawled unintelligibly by thekelvingreen at 7:55 am 1 comment:

The Bird is the Word

I've finally been hit by my first bit of comment spam, so I've turned on word verification. Sorry.
Scrawled unintelligibly by thekelvingreen at 7:27 am 1 comment: