I am sorry it's been so quiet around here of late. Most of my gaming group has been jetting around Europe so I have been playing a few board games here and there, but I didn't think anyone needed to read about how bad I am at Netrunner or Blood Bowl.

Well okay, I managed to lose a Blood Bowl match against an orc team playing a passing game, that's how bad I am. Let's leave it there for now.

Well, except that I'm tempted by a vampire team as they seem like unpredictable fun, or maybe a dwarf team, because I've never tried them.

As the school term begins, the group returns to home base and so we met again last night for the first time in weeks to try the Dragon Age role-playing game by Green Ronin. I've had the quickstart rules and the first boxed set as pdfs for ages -- ho ho -- but it's taken a while for us to get around to playing.

I don't remember how I first encountered the game; although I consider Baldur's Gate II to be one of the greatest computer games of all time I lost track of Bioware's output some time after Neverwinter Nights, when I lacked hardware powerful enough to play any of their games. As such, I only started playing Dragon Age -- the digital version -- a few months ago and I haven't got very far, so I don't know it well enough to consider myself a fan and I don't know why I bought the tabletop version all that time ago. 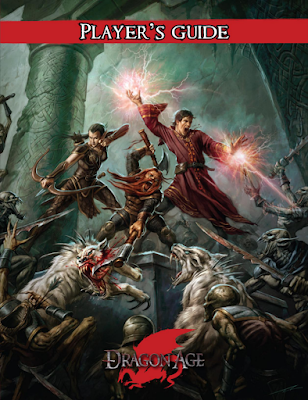 Yet I did and I found a simple ruleset similar in many ways to old Red Box D&D but cleaned up and with some modern ideas like a stunt mechanic; that ticked all sorts of boxes for me and I went to my group with all sorts of enthusiasm but they weren't interested at the time.

Now in 2015, we as a group have developed a taste for something lighter and less complex for our fantasy gaming, and the recent release of the generic Fantasy AGE rules -- Dragon Age with the Dragon Age bits taken out -- brought the game back to our attention, so I dug out the files and we played the quickstart adventure yesterday.

It's good! Having played the game, it now reminds me less of Red Box D&D and more of Savage Worlds, except less wild and unpredictable; it's perhaps a little less fun as a result, but not to a significant extent, and I'm sure some people would prefer the consistency the AGE system brings. The stunt mechanic is a good example; there's an element of randomness in determining whether a stunt occurs -- like the Aces in Savage Worlds in some ways -- but then the player gets to decide how it manifests by spending points to buy special effects from a menu. It's a nice blend of unpredictability and control.

That blend is also present in the basic 3d6 task resolution mechanic; you know that 11 is the most common result on three dice so you can plan around that, but nothing is guaranteed and there's always the chance of a different outcome. This sort of thinking carries through into character generation too; we used the characters provided in the quickstart set but there are some semi-random elements when creating one's own character, so that the majority of elves -- for example -- will have similar traits but some will have more uncommon abilities.

I ran the game so I didn't get to play around with the options available to the others but they seemed to have fun; after the game there were some concerns that the characters may be too flat and samey, but that could be a perception based on the pre-generated set of beginning characters. As the gamemaster I found it easy to run with little in the way of book-keeping and my main difficulty was grappling with the layout of the adventure, and even that is a minor complaint.

Monsters are easy to run and I like the way that some creatures have unique stunts not available to player-characters -- I'm fond of these sorts of asymmetrical mechanics and I should write a post about it some day -- and it reminded me a little of the way monsters work in 13th Age, albeit not quite on the same bonkers scale. The statistic blocks are larger and more detailed than those of 13th Age and basic D&D, but didn't strike me as cumbersome in play, although I didn't need to make much use of them; perhaps that's a design flaw and they could be condensed even further. Monsters aside, I didn't need to engage with the rules much; it seemed to be a case of setting a task difficulty and letting the players get on with it, which is just the sort of hands-off approach I like. I imagine the proper rules go into more detail but I can't see heaps of complexity being added.

We treated the setting as a bit of a joke; we weren't having any of that "genlock" business so the adventure was populated by not-orcs, not-goblins, and not-wargs, as appropriate. To be fair Stuart did make use of a key setting concept when making a pivotal choice in the adventure, so we didn't treat the whole thing with contempt, but it's safe to say that the release of a setting-agnostic version of the rules is welcome.

The AGE system hasn't displaced 13th Age or LotFP as my favourite D&D-like fantasy rpg but I like it enough to be keen to give the rules another try. I've had some vague plans to return to Titan -- the setting of our D&D5 game from last year -- for some further adventures, and I had my eye on Savage Worlds for that, but based on last night's game I wonder if Fantasy AGE may not be a better choice. I look forward to finding out.
Scrawled unintelligibly by thekelvingreen at 1:49 pm No comments: