The strip I drew for the first issue of Rol Hirst's anthology comic PJANG! is now available to view free online. Not only that, but the far superior strips drawn by Tony McGee and Andrew Cheverton are also available for your viewing pleasure.
Scrawled unintelligibly by thekelvingreen at 10:56 am No comments:

Email ThisBlogThis!Share to TwitterShare to FacebookShare to Pinterest
Labels: comics, PJANG, self promotion

A Year in Review

This won't be one of those best-albums-films-books posts, because I lack the capabilities to be a music enthusiast -- although I have developed a liking for Crystal Castles -- and I've spent most of the year trying to get through Don Quixote, so I've not had much time for anything else. I did see quite a few films -- including some new ones for once! -- and I'll be a dissenting voice in saying that I didn't think Inception was nearly as good or clever as everyone seems to think it was, and Scott Pilgrim was miles better.

Instead I'm going to have a whinge, in the manner of Mr Phill Hall.

2010 started for me with one of those big life-changing events, and not one of the good ones, either. It's not something I feel ready to talk about in detail, but it's fair to say that I've spent the rest of the year trying to recover, with limited success. Some days are good and I feel quite normal, but others are a proper struggle and I wonder if I'm right in the head. I suspect I may have acquired a touch of depression in there, but it's hard to tell if it's that or if I'm just being a stick-in-the-mud.

So there's that millstone, but it's not all been bad. As I hinted at above, I've been to the cinema more often this year than I think I ever have before, in part due to a good friend who's a bit of a film buff -- and who seems to love everything he sees, which is quite charming -- and who often requires company. It's a simple thing, and it seems absurd and more than a little embarrassing to talk about going to the cinema with a friend as a highlight of the year, but it's surprising how sometimes even that can feel like I'm doing something special, and it becomes quite cheering as a result.

The other highlight -- and it's entirely possible that I'm being naive and optimistic in my estimation here -- is that my art seems to be taking off. I still look at the stuff I draw and hate it almost as soon as I put the pen down, but people seem to like it, and I've been kept busy doing something I love. I received a big commission in the summer, to illustrate an entire book, including covers, but the client seems to have disappeared. On a happier and more productive note, I've been contributing art to Fight On! on a regular basis, did a few pieces for a Dungeons & Dragons product, and have contributed to a book of fictional gods for release in 2011. That said, comics are my first love in terms of art, and while I continue to battle against writers' block on my own projects, Rol has been keeping me fed with scripts for his anthology title PJANG! That doesn't seem like a lot now that I put it down in words, but it's been keeping me busy. I may be forgetting some details somewhere.

That's pretty much it for my year. With the ConDemNation cutting public sector spending, my job has got worse over the year and will likely continue to spiral downwards in 2011, but that's the thing I do for money and I try not to let it invade the rest of my life, the important bit, which is all that stuff up there. So 2010 has been a bit of a mixed bag, with one big howitzer of a bad turn throwing everything else akimbo, but I wonder if, in the end, I haven't made an extra effort to make the most of the good stuff as a way of dealing with the bad stuff. If so, I think it's worked.

So to all three-and-a-half people who read this blog, I hope you have a happy 2011!
Scrawled unintelligibly by thekelvingreen at 2:35 pm 3 comments:

Email ThisBlogThis!Share to TwitterShare to FacebookShare to Pinterest
Labels: comics, my so-called life, PJANG, stuff that I drew, year in review

Rol has just published the fifth issue of his not-The Jock-and-not-Escape Committee-but-still-quite-good comic-for-misanthropes PJANG! and the latest issue has a story drawn by myself. It's not all bad news though, as it also features a story drawn by Paul Rainey. You can order a copy for the bargain basement price of £1.75 by clicking on the image below. 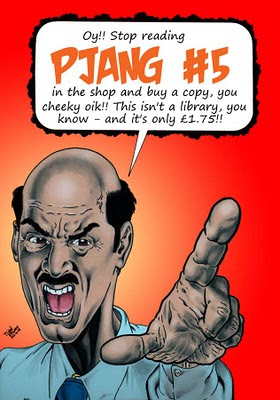 Scrawled unintelligibly by thekelvingreen at 9:05 pm No comments:

Email ThisBlogThis!Share to TwitterShare to FacebookShare to Pinterest
Labels: comics, PJANG, self promotion, stuff that I drew 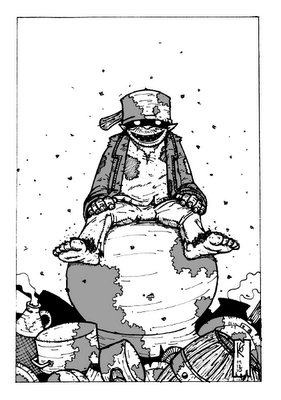